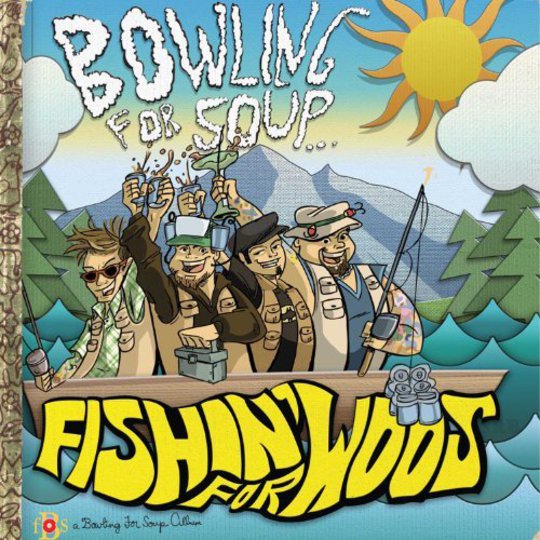 Indefatigability isn’t a character trait that I’d expected to associate with Bowling For Soup. Yet while most of their middle aged skateboarding punk pop peers have retreated from the toils of fleeting commercial success, concentrating instead on their careers in the fast food industry, BFS have diligently ploughed on in the face of mass indifference. Remarkably Fishin’ For Woos is their eleventh studio album.

If that isn’t good enough for you, the even better news is that they have apparently been 'cut free' from the shackles of ‘The Man’. No longer suffocated by the constraints of a major label recording contract, with full artistic control finally within the grasp of their chubby digits, surely the only limit is the horizon?

Despite the publicly celebrated emancipation, business is very much as usual. It isn’t their Kid A anyway. A more relevant comparison would be with Status Quo. If you’ve heard one album, you’ve heard them all. That doesn’t mean it is automatically going to give you earache. (I’m not sticking up for The Quo’s back catalogue here, though I’m not going to disrespect it either. Quo fans are mental, like Kathy Bates in Misery.). But what's unquestionable is that as well as having careers outlasting any recommended best before dates, both groups have left evolution to the monkeys.

If you want upbeat, kind of catchy songs that don’t make you think, then you’ll be happy. A lot of the time all I hear is excommunicated UK boy band of yesteryear Busted. You can’t help but crack a smile listening to the lyrics to ‘I’ve Never Done Anything Like This’. It’s like the fantasies of a 14-year-old chronic masturbator transported into song. ‘Here’s Your Freakin’ Song’ leaves you wondering why a group of middle aged 'dudes' don’t just drop the F-Bomb.

‘Girls in America’ is their twenty-first century homage to California Girls by the Beach Boys. Wisely they have decided to cast their net a bit wider than the inhabitants of just one state. Focusing on a whole country’s worth of women. I guess you can’t be too picky when you are pushing 40 and still willingly wear shorts.

Self censoring or not, at times it feels like they’ve grown up. No doubt initiated by recent acoustic tours, the acoustic guitar comes to the forefront. ‘Turbulance’ is a welcome change of pace, and it is good to see the band have another dimension, but it is like a dog wearing a dress. Interesting, but you know it took a lot of effort to produce something that is ultimately underwhelming. From the majority of the lyrical content it quickly becomes evident that mature for BFS is probably remembering to wipe their arses after going to the bathroom.

To be fair a band like BFS are an easy target. There is always a queue of people waiting to put the boot in. I was expecting a record full of opportunities to hang BFS out to dry, but there aren’t any obvious faux-pas. Fishin' for Woos is solid because when a band is together this long they know what they’re doing. They’re tight. They’re also like herpes. They’re here for the long haul. The only way they’ll disappear is if their loyal fan-base collectively fall off a cliff, which is unlikely.