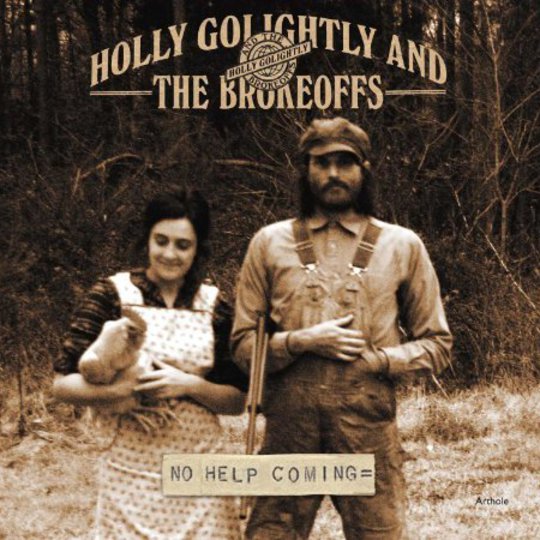 Country music has an inherently American feel to it: it is the music of the heartland, the music of the average working citizen, the music of the salt of the earth. Like so many genres, it thrives on the idea of authenticity, that the songwriters really understand the values of their listeners. The difficulty with country songs is - as pop songs can too easily become saccharine drips - that they too easily devolve into comical lists of grievances. Surely there must be a country version out there somewhere of Jay-Z’s ‘99 Problems.’ There are regular attempts in America to bring the sounds of the heartland to those with more rock music inclinations. Brooklyn has imported plenty of bearded boys in flannel from the Midwest trying to do precisely this and fail miserably in the process. So what exactly are the London-born Holly Golightly and her band the Brokeoffs doing right?

On No Help Coming, their third full-length, Holly and Lawyer Dave keep a firm grasp on all that is whimsical and charming about Americana, but have a deep understanding of when to let got of these core elements. The essence of the album - including the lead title track - is rollicking saloon sing-alongs. It’s a formula that works well, balanced with Holly and Dave’s blended vocals, and plenty of mildly sinister lyrics to paint portraits of hard-won modern homestead life, alcoholism, and classic country music heartbreak.

While Americana is the general flavour of the album, it’s the rhythmic differences between songs that distinguish the individual tracks. ‘Burn O Junk Pile Burn’ has a tango rhythm underneath the tremolo warbling guitars. When the jaunty foot stomping gives way, what is left is a placid, gin-soaked structure, secured from earnestness by a caustic wit. Even the holier-than-thou takedown, ‘Lord Knows We’re Drinking,‘ is more of a satire of a country song, laced with sharp-tongued comebacks for the town hypocrite. And really, when was the last time you heard anyone referred to as a "self-righteous biddy"?

But Golightly shows herself capable of truly tender moments, with the only concession to country style being a lone fiddle. Her voice has a slightly raspy, Stevie Nicks quality to to it that dispels any need for exaggeration. She is adept enough to dial down the twang for ‘River of Tears,’ which needs no affectations for the sake of character, and is improved by her gentle touch. Imagine how ‘Landslide’ could have been improved upon if Stevie only knew when to hold back.

Rather than coming across as buzz kill fillers amongst the clever, energetic tunes, tracks like ‘River of Tears’ and ‘The Only One’ have a melancholic sincerity that is both refreshing and heartbreaking. Both take a downtempo, minimalist approach that highlights Golightly’s vocals in overdubbed harmonies. It’s always impressive when the ballads on an album neither slow down its pace nor detract from the rest of the album. It’s a true testament to how well-rounded this album really is.