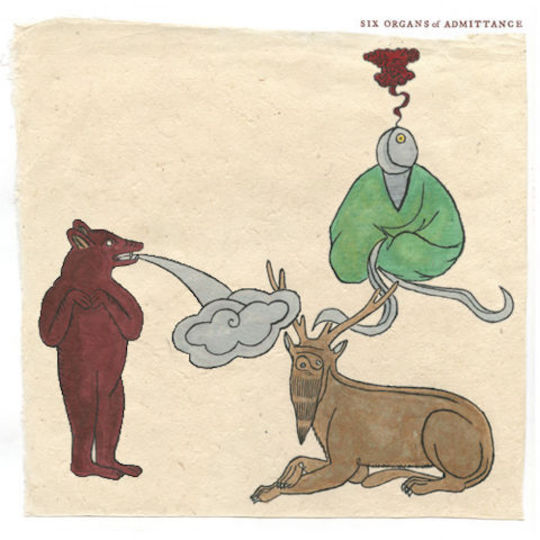 Ben Chasny’s Six Organs of Admittance were, reluctantly or otherwise, fully paid up members of the short lived ‘freak-folk’ movement of the mid-Noughties; what now seems a strange period where a group of musicians across the States, often with little in common other than a love of Sixties folk and psychedelia, came together to form a loose movement, memorialised in the compilation Golden Apples of The Sun. Devendra Banhart curated that CD, and yet as the movement progressed and diluted, the artists involved seemed ever more different. Kyle Field of Little Wings emerged, alongside Joanna Newsom, as the most vivid and lasting songwriter, Espers and Vetiver faded away, while Banhart himself seemed to become a preening caricature of himself.

Meanwhile, Ben Chasny’s music, unlike any of the other artists on the collection, had a particularly bleak, singular vision, one he continues to pursue to this day. Where Banhart’s songs had a cloyingly cutesy element to them, Chasny’s world-view is remorselessly melancholic. The truth of his America is that of the desert, the wilderness; his protagonist the lone traveller pitting his wits against nature. Six Organs’ music reflects this fundamental melancholy – their albums sway between sweeping drones and delicate acoustics, with Chasny’s own vocals occasionally hovering ambiguously in the background.

Chasny could never be accused of a lack of ambition – Six Organs have released roughly an album a year for the last decade – but you could say he lacks focus. Probably one of the most talented guitarists of his generation, often that talent fails to translate into songwriting nous; arguably only a handful of his own ‘proper’ songs, particularly the sublime ‘Words For Two’ (from 2004’s School of the Flower) could be said to be truly great. Whereas his instrumental guitar pieces, in the avant vain of John Fahey, Robbie Basho and Loren Connors, frequently achieve a unique kind of transcendence. Chasny’s best pieces - The Sun Awakens’s ‘Wolf Pup’, for example - are as delicately poised as water’s surface, clear and indefinably sad at once. For me, Chasny’s masterpiece is For Octavio Paz, a whole album of instrumental tracks beautifully reflective and poised in their simplicity (like Paz’s own poetry). It’s arguably one of the great over-looked albums of the last ten years.

Asleep on the Floodplain is billed as a return to that pared-down sound, and it is as close as Chasny has come since to capturing the simple beauty of For Octavio Paz. Opener ‘Above a Desert I’ve Never Seen’ is more frantic than anything to be found on that record, Chasny’s virtuoso finger-picking both impossibly technical and powerfully emotive. ‘Light of the Light’ and ‘Hold But Let Go’, meanwhile, are among the best lyric songs in the Six Organs canon, Chasny’s voice never overpowering a simple guitar line and melody in both cases, his gentle delivery reminiscent of Bert Jansch. The album’s high points, however, are its most reflective moments - the sad, droning organ of ‘Brilliant Blue Sea Between Us’, or the delicacy of ‘A New Name On An Old Cement Bridge’. Or maybe closer ‘Dawn, Running Home’, whose name recalls the title of the Jorge Borges’s story, ‘Funes, His Memory’. Arguably Chasny’s music owes more to authors like Paz and Borges than his now disparate ‘folk’ contemporaries. Such South American authors, with their emphasis on memory and nostalgia - and awareness of the fine line that separates civilisation from the desert - seem to echo Chasny’s own world view; on Asleep on the Floodplain it’s a vision as precise and piercing as ever.