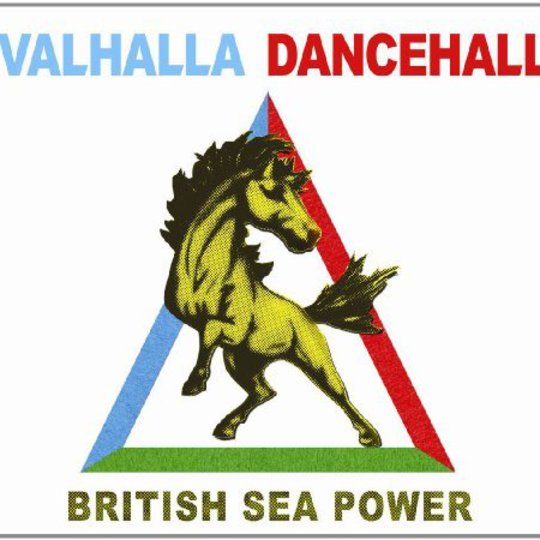 British Sea Power's reputation as indie-oddball national treasures is built as much on the eccentric subject matter of their lyrics (large seabirds, Antarctic ice-shelves, Dostoevsky) and their tendency for doing gigs in strange places (the highest pub in Britain, Cornish caves) as it is on their arsenal of post-punk indebted discordant rackets, poised anthems and weathered ballads.

However, the title of 2008's top ten-cracking Do You Like Rock Music? hinted at a group more concerned with the basics of their sound than their songs. Despite being mostly successful as a beefed up version of their earlier selves and featuring some of their finest moments to date ('Waving Flags', 'No Lucifer') it also numbered a few by-number rockers that lacked their usual lyrical and musical intrigue in the likes of 'Down On the Ground' and 'A Trip Out'.

The good news is that Valhalla Dancehall, with its infinitely more interesting - although very misleading (if you're really that gullible) - title proves BSP to be a group that are far from running out of ideas, slightly refining and augmenting their classic sound. In fact opening track 'Who's In Control?' picks up where the DYLRM?'s crude rockers left off, but fashions something infinitely more interesting and vibrant out of the same material, unhinging it with feral screams. The raucous sound is matched by the riotous sentiments of the lyrics: on paper lines like “Fuck, fuck, boy you stand, boy you stand and fight!” make for vague rhetoric, yet the timing in our current 'age of austerity' and student protests is thrillingly prescient, if perhaps flukily so. It's less esoteric and more directly expressed than in the past, but the lyrical eccentricities remain in plentiful supply.

'Stunde Null' is a case in point. The title refers to the 'zero hour' in Germany at which WWII ended; Yan declaring ”You've been on standby for half a century” amidst fuzzy bass and percolating synths before his characteristic upward inflection leads the song soaring into an nonchalantly tuneful chorus which is in turn pierced by jagged post-punk guitars. The electronic dabbling that featured on the preceding Zeus EP makes brief cameos on 'Stunde Null' and a few other tracks, but is only prominent on the excellent single 'Living Is So Easy'; its judgement-free depiction of a party that brings together the “rive gauche girls” and “banlieue boys” is a glamorous elegy burbling with melody and boasting the prize opening couplet “Well oh my god did she look cute/At the Dame Vera clay pigeon shoot”. 'Luna' shares the party references, although this time concerns one specific titular “strange girl” and musically is an even more delicately poised blend tinkling piano and gossamer guitar drifting atop clouds of vaporous keyboards.

One defining aspect of the record is the division of frontman/writer duties between brothers Yan and Hamilton, the latter responsible for Valhalla Dancehall's more expansive, less verse/chorus orientated tracks. The pick of these is 'Baby' a gorgeously spare drift of acoustic guitar and glockenspiel in cavernous surroundings of mid-distant drums and distant wails of musical saw, with the vocals of Hamilton and now full-time member Abi Fry in slightly divergent harmony. There is also the welcome reappearance of Zeus epic 'Cleaning Out the Rooms' where militaristic drum rolls cut through the orchestral swell like the bow of a Man O' War through the choppy waves. Unfortunately Hamilton's wilting vocals are somewhat overpowered, leaving the lyrics indiscernible. This is likewise the case with 'Mongk II' Hamilton's most bilious contribution, where the already distorted vocals are surrounded by corrosive static and searing feedback wails atop a scuzzy pulse.

Of course the Yan=direct/Hamilton=expansive equations isn't a strict dictum. Yan gets a ballad too in the plaintive piano-led swell of 'Georgie Ray', but it's extremely concise compared with Hamilton's 11-minute 'Once More Now'. Unfortunately, despite several moments of beauty throughout, the very length of the track weighs down the latter part of the record coming after 'Cleaning Out the Rooms', despite the goonish freak-out of 'Think Black Sail' providing brief respite between to the two. It means that come the pretty-but-purposeful Bunnymen-esque closer 'Heavy Water' the opening strains of 'Who's In Control?' seems a distant memory.

It's perhaps harsh to criticise where there really is no great noticeable dip in quality, despite the lack of a real standout track. 'We Are Sound' and 'Observe the Skies' are somewhat BSP-by-numbers, but are brief and certainly don't want for melody. Some will decry Valhalla Dancehall's essential familiarity, but on their fourth album proper British Sea Power are a band unique, complex and confident enough in their own right to remind us why we loved them in the first place whilst making modest refinements to their sound.