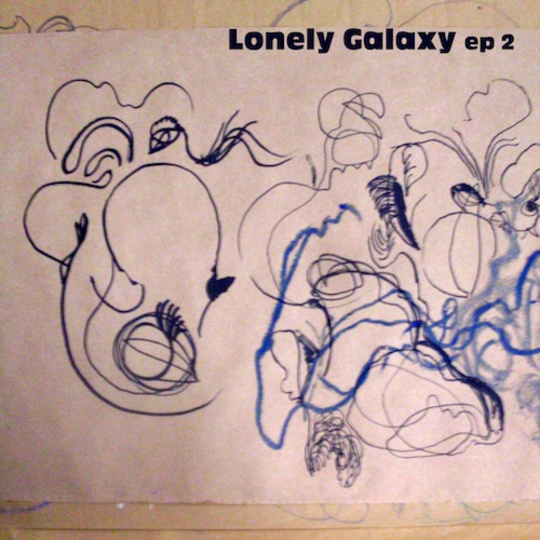 Young Harry Granger-Howell follows his well received debut EP1 with, as our Luke rightly prophesied, the numerically monikered EP2. It only seems appropriate that Lonely Galaxy should continue in this way given the material similarities in sound and form with that début EP. Predictability is not, of course, an accusation you can square at a young artist a mere eight recorded songs into his career; Lonely Galaxy is still setting his stall and in promising fashion.

Opener 'Bible Truth Depot' utilises the same tools as EP1 lead 'Have a Heart', with lightly plucked guitar notes atop a drone of organ, although musically lacking the gently persuasive swell of that song. While lo-fi bedroom craft is all part of Lonely Galaxy's charm, here the cheap organs just sound gaudy and in the presence of the trebly reverbed guitars make it sound like an alternative version of Interpol's 'Next Exit'. Thankfully Granger-Howell's vocals provide some sense of purpose, guiding the song both melodically and emotionally; even though the lyrics are mostly indiscernible, every wail and tremble of Granger-Howell's vocal chord hits a note on the emotional (if not the melodic) scale and the song gets more engaging the more erratic and desperate he sounds.

The cascading walls of guitar and simple piano chords that open 'Nutts' recall recent tourmate Perfume Genius, with whom Lonely Galaxy has drawn many comparisons. Both are earnest spinners of bedroom-forged loneliness and despair, but there are clear differences; Lonely Galaxy's preference for subtly effected guitars not only lends a rougher texture to that of Perfume Genius, but he also amps up the scale somewhat, more so on this EP than the first. 'Nutts' is almost anthemic, almost has the makings of a festival sing-along with its ”Da-da-da-doo-dah” chorus, except it retains the forlorn mood in the verses, with that subsequent chorus perfectly judged so as to simultaneously provide catharsis whilst lighten up the potentially overly melodramatic tone. Instrumental track 'Heavy' is much less accessible and feels a little insubstantial, but at the same time is a further expansion of the palette, all restrained piano twinkling glock and guitar interplay with a mood of star-gazing serenity that suggests Granger-Howell is acknowledging that is indeed a Lonely Galaxy and not just a forlorn bedsit.

As far EP2 is concerned however, it is the piano-ballad 'Modern Romance' which should act as a litmus test as to whether Lonely Galaxy are for you. Vocally and lyrically it's Granger-Howell laid bare, the unadorned words not obscured by lo-fi production and only rendered all the more affecting by the visceral delivery and gorgeous arrangement of cascading arpeggios and haunting strings. The lines ”The sheets are all fucking soaked right through, her dress is all faded, do you remember when it was brand new, but things fade and get replaced, things fade and people change”, spill forth with a thrilling incoherence amidst the stately music, Granger-Howell sounding like a pissed up Righteous Brother. It's the kind of unadorned emoting that you'll either find gut-wrenching or stomach-turning depending on your tastes, although the suggestion of inebriation in Granger-Howell increasingly slurred delivery is probably less divisive than they fey-indie-folk earnestness of Conor Oberst for example. Howell-Granger himself admits that “Some things should never be said”, but he knows fine well it's all the more fascinating when you do. It's hard to disagree with our earlier prognosis and submit that EP2 is a continuation of “something very good indeed.”

Find Out What Happens When People Stop Being Polite, And Start Gettin' Reel