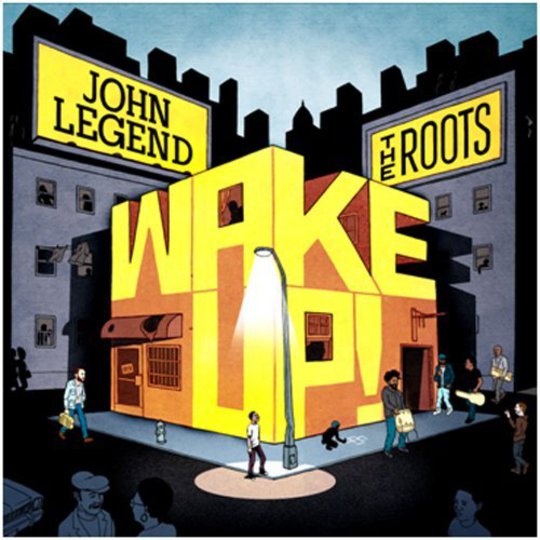 John Legend is a sharp cat. In a time where a strong black man singing about something other than bling and pussy is regarded as chart poison, he cuts a solitary figure as the guy who reminds us that, in fact, there is more to life than Akon and T Pain. Since the golden era of Motown, soul music has been on a long slide downhill, with odd blips along the way like D’Angelo doing their best to arrest the decline. R&B music today, particularly that pedalled by the male singers of the genre, resembles a bum grubbing around in the dirt trying to hustle a dollar. It’s a curious state of affairs when someone like John Legend seems like one of the most forward thinking guys around just for trying to preserve the standards of music released 40 and 50 years ago.

By that train of thought, it makes perfect sense that Legend should collaborate with similarly obstinate-yet-wonderful rap crew The Roots to cover a selection of soul classics aiming to inspire change. The old dignity of black music calling for engagement and spiritual consciousness from the brothers and sisters on the block has gone, replaced by the dancefloor hyms to money mentioned above. After President Obama’s election in 2008 Legend and The Roots saw a chink of light amid the darkness, and got inspired to put together some music to capitalise on the sense of possibility that historic event created. Like I said before, looking forward meant looking back for inspiration, but Legend himself puts it more succinctly when he says: 'These songs sound so relevant now. On most of them, you wouldn’t change a lyric. ‘Wake Up Everybody’ has four verses- the first one is a general statement, the second about education, third is about health care, and the fourth is about making a better environment. No editing needed.'

So, with The Roots effectively acting as his band, Legend takes on familiar numbers like ‘Wholly Holy’ by Marvin Gaye and Donny Hathaway’s ‘Little Ghetto Boy’ as well as few less well-known cuts like ‘Hard Times’ by The Babysitters and ‘Hang On In There’ by Mike James Kirkland (the opening bar of which is the sample for ‘I Did It Like This’ by Ugly Ducking, for those who are interested). The results are as good as the names involved would make you hope. Of course Legend is no Hathaway or Gaye, but he is far and away the closes thing to them around right now, and he never sounds out of place stepping in their shoes, which is about as big as compliments get really.

Initial spins of Wake Up! give the impression that Legend is being dragged out of his comfort zones somewhat by the rough funk that The Roots bring to the table. The punchy opening duo of ‘Hard Times’ and ‘Compared To What’ rock a kind of blaxploitation-era groove which appears lighter on melody than Lennon’s usual work. When Black Thought blasts off on ‘Hard Times’ there is just the faintest hint of relief as his muscular rhymes style seems to command the track more readily than Legend. By track three, ‘Wake Up Everybody’ all such concerns are gone however, as Legend bends the polemic to his traditional strengths on a smooth duet with Melanie Fiona before Common sends the track over the top with a spiritually-aware rap.

By the time Black Thought returns for ‘Little Ghetto Boy’, Legend is on a surer footing and this time dominates the track. His half-baritone riffs off the jazzy piano breaks nicely, helped no doubt by the slight drop in tempo. After this the guest stars end and Legend flies solo from tracks seven through twelve, basically not putting a foot wrong. ‘Humanity (Love The Way It Should Be)’ is a mid-tempo dancehall number, ‘Wholy Holy’ is a faithful yet not slavish cover of the Marvin Gaye classic. Legend and The Roots strip out some of the anguish of Marvin’s version; the context of addiction which surrounded the original is jettisoned in order to focus more on the message of unity. The album closes with its sole original composition, ‘Shine’, and it stands up as the equal of any of the tracks before it. A gentle, jazzy funk croon to soothe out the sores of the album opener, perhaps. This isn’t the best album John Legend or The Roots have made, but it’s not going to go down as the black sheep of either canon. Any niggles about Legend’s style seeming slightly disconnected with the faster, funk-led tracks melt away a little more each time you hear the album, and what’s left is a very decent attempt to bring back the kind of politically conscious messages which are currently AWOL in mainstream black music.