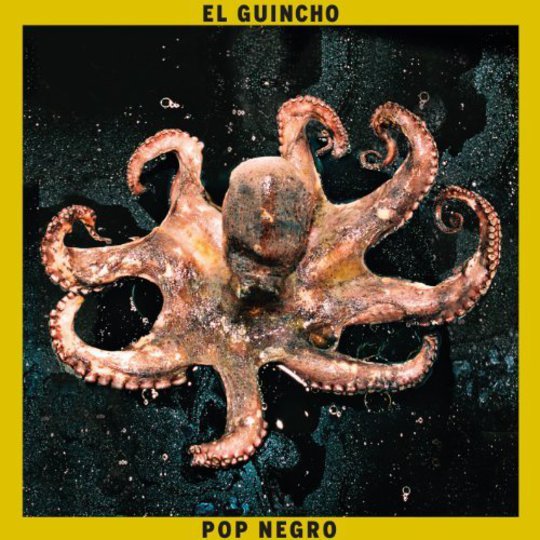 I am watching an interview with Pablo Díaz-Reixa, a man I know little about but who you may recognise as El Guincho. During said video, as Díaz-Reixa discusses his influences, a rampant hubbub wrestles its way to the foreground. Drums are falling over each other, and these drums are not the sort to say pardon; their brashness is marvelously unapologetic. Singers are yelling, whistling with utter exuberance. I fast-forward to the credits to locate the song - it is 'Cravo e Canela' by Milton Nascimento and you have to hear it, really. So first of all, First Of All, if you are yet to experience your I TOTALLY GET AFRO-TROPICALIA, MAN moment, I will put a link to 'Cravo e Canela' here, and you can go and bloody well listen to it. OK? Good.

Good? Well anyway, back to that interview and Díaz-Reixa seems nostalgic and carefree, almost child-like as he reflects on his 'really laid back' life in the Canary Islands. 'There's not much you can do,' he grins, 'Just like, play sports, go to the beach or go to music school'. Hmm. 'Play sports, go to the beach or go to music school'. Yeah. Thing is, it's hard to hold any disdain for this bright, cultured, attractive, musically talented young fellow and his curly locks. Because while his penchant for African, South American and Spanish folk music may betray a faint desire to return to those shores, it's also a celebration of everything he's discovered since leaving them. He's always shown an impressive determination to discover and harness great pop music - especially that which appeals to international audiences - and here El Guincho surpasses himself, summoning former TLC/Destiny's Child collaborator Jon Gass to the mixing desk... with, er, mixed results.

On El G's second offering, Alegranza, Díaz-Reixa proved that simply repeating a single chorus of upbeat exotica for six minutes yields results preferable to every piece of wanky prog rock, ever. As you may be aware that album was spot on, so, happily, Pop Negro covers new ground. Saying that, most of the record is, first and foremost, pop - just a profoundly skew-whiff interpretation of it.

Sticking largely to pop-familiar structures and revolving around hip-waggling choruses, these are the party's unabashed attention-seekers. By this I mean, even if you and The Rhythm have never really hit it off, 'anthems' (yeah I said it) such as 'Soca Del Eclipse' will likely compel you to seek out new ways to embarrass yourself. This, I hope you'll agree, is an idea to be embraced. A friend of mine, who happens to be a demigod of dance music (she went to Creamfields and everything), informs me that a 'snake-hips' technique would be the correct dance-floor etiquette for said song. In all honesty I have no idea what she's talking about, but this part of the review is now officially 'technical'. Look impressed.

Better even than 'Soca Del Eclipse' is album opener 'Bombay' - though perhaps not the clear-cut highlight, it does capture the quintessence of Pop Negro. The song's off-beat percussion and overlapping cross-rhythms throw traditional melodies off-balance; askew. The malleable Spanish language enables Díaz-Reixa's voice to function as another instrument, streaming elegantly over the rapids beneath it. And yes, at first it all seems a bit raucous; a bit steel-drum-fiesta-outside-your-house-at-six-in-the-morning, but generally the ecstatic 'vibes' (you see what this album is doing to me? It's turning me all Jo Wiley...) will osmose into your psyche, rather than grating on it. Elsewhere, syncopated handclaps beat out fidgety rhythms at a barely audible frequency, in a second verse that's crammed with subtle delights - many of which are revealed only upon repeated listening.

And funnily enough, it's these understated, almost obtuse elements that stand out, above their zealous, stadium-exotica counterparts. As with many bedroom projects it's particularly rewarding to focus on the minute details, allowing the bigger picture to blur on the periphery, like an impressionist painting. It took me a while to realise this but - do forgive the rank cliché - Pop Negro is more than just a party album. Don't get me wrong, it functions well as such, but it can also be soothing, transportive music; it can help rejuvenate your dreary day in England. There's a strong undercurrent of entrancing, psychedlic-pop to enjoy if you're prepared to listen hard enough. But if you're not into that sort of thing, if you're all about the tunes and the beats, it's still worth a go - I doubt it'll set your world on fire, though.