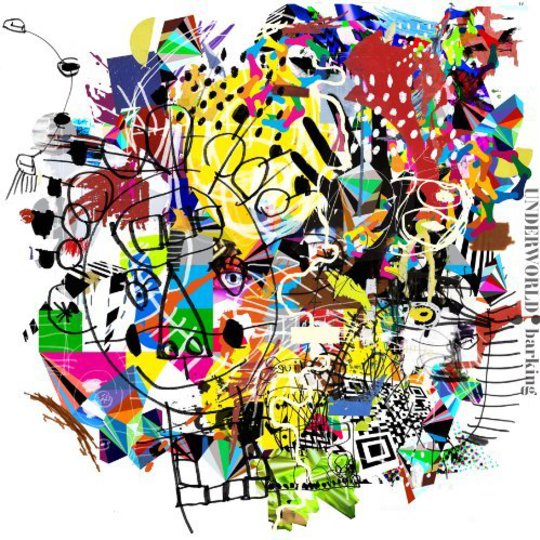 To give some perspective into just how long Karl Hyde and Rick Smith have been making music, in the year that they began recording, Joy Division had just released Closer (soon after Ian Curtis’s death), John Lennon was shot, Raging Bull had just come out and Iraq invaded Iran. Thirty years on and as a celebration of this milestone Underworld have, along with several contributors including D Ramirez, High Contrast, Dubfire, Appleblim and Al Tourettes, released Barking.

Standing at just over an hour long, Barking is, unsurprisingly considering its collaborative nature, a mixed kettle of sonic fish. While many of the tracks do have an Underworld thumbprint audibly placed front and foremost, some lack such a distinguishing feature, while others are clearly a tribute to the work of contemporary electronic music artists. ‘Always Loved a Film’, produced with the help of D Ramirez, tips its hat heavily in the direction of Deadmau5 with a prog-house trancey-techno intro, before morphing into a camp electro number which sounds like Shy Child re-imagined in a cheesy Ibiza setting. ‘Grace’, produced with Dubfire, is a gloomy and emotion-filled track which brings to mind Booka Shade’s ‘Darko’, while ‘Scribble’, the lead single off the album, produced alongside High Contrast, is drum’n’bass in its most poppy incarnation, with Hyde’s vocals swaying dangerously into Rob Swire territory.

Barking is hit-and-miss, and with Underworld's collaborative partners each featuring on multiple tracks, it is hard to know who exactly to give credit to and who lay the blame on. For example the best track on the album, opener ‘Bird 1’, which features a stomping 4/4 beat with accompanying hi hat that wraps itself around Hyde’s vocals, and which builds in momentum before exploding into a euphoric trance-y pinnacle, was made in collaboration with Dubfire. The second best track, the aforementioned ‘Grace’, just so happens to have been made with the same collaborator. Similarly, ‘Scribble’ and ‘Moon in Water’, both made with High Contrast, happen to be two of the weakest moments.

While each track sounds different to the one that preceded it, they all manage to fit together as a coherent whole. Barking is still a credible effort and a pleasant listen, but it is also unremarkable and, had it been released by artists whose fame didn't precede them, it probably would not have made any waves. With a career spanning three decades, it is unreasonable to expect Hyde and Smith to still be breaking boundaries, and to use their reputation as a stick to beat them is perhaps unfair. This record can be seen as a work of celebration – celebrating the fact that they are still producing music and paying homage to the new and current generation of DJs and producers – while residing in the comforting notion that they have already proven all that they have to prove. Or it could be considered a somewhat lazy effort, a work more poppy than anything they have previously produced and one in which they know will sell well. I am inclined to think that Barking lies somewhere between those two points.