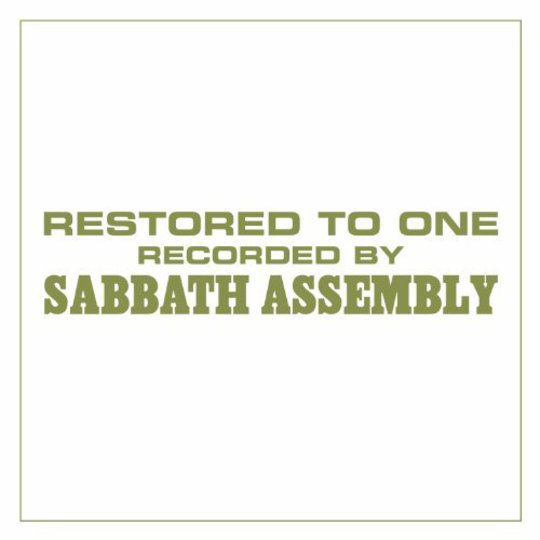 There is probably a decent book waiting to be written about the myriad connections between music and religious cults, and the various ways in which they overlap. Plenty of ink has already been sprayed on racist lunatic Charles Manson and his addled Beatles obsession, plus the equally addled Beach Boys’ overly close friendship with the figurehead; you might also know about Jeremy Spencer leaving Fleetwood Mac to join the Children Of God, a cult who once counted Christopher Owens of Girls among their junior number. Sabbath Assembly, a duo of musicians better known for previous ventures, are – it seems safe to assume – curious consumers of the burnt edges of underground culture, rather than authentically mind-wiped cultists. They’re definitely not members of the Process Church Of The Final Judgement, whose hymns they have set to curdled psychedelic rock on Restored To One, because it dissolved in the mid-Seventies (presently evolving into a large animal sanctuary near Utah, kind of awesomely). They are, however, all dab hands in the art of dressing up in crazy persons’ garms and causing audiences to zone out through extreme atmosphere.

The most recognisable presence on Restored To One is Jessica Toth, whose triumphantly witchy vocal can also be heard front and centre in Jex Thoth – a analogue-loyalist proto-doom band who cop the moves of Pentagram and Coven in equal measure. As such, Sabbath Assembly is less of a departure for her than Dave Nuss, who started out playing thrash metal and later founded the No-Neck Blues Band – the clattery free improv ensemble who I must admit to never having ‘got’. While his playing remains loose and untethered on these nine tracks, though, it’s in the spirit of olde tyme psych oddness rather than complete musical deconstruction.

Perhaps the most impressive thing about Sabbath Assembly is the manner in which they walk a tightrope between being thuddingly rockist and legitimately hymnal. More often, attempts to combine both these disparate worlds into one entity equate to pompous white rock bands hiring black gospel choirs to lift their paucity of inspiration up to the heavens, as it were. This is certainly not what happens here. Moreover, to sing the gospel of the Process Church requires one to honour the spirit of both Christ and Satan, this being the cult’s USP (the idea was that come judgement day, the two would bury the hatchet and work together in handing beatdowns to humanity’s chump faction). So track one is entitled ‘Glory To The Gods In The Highest’ – so far, so churchy – right afterwards, ‘Hymn Of Consecration’ starts with skeletally sparse Middle Eastern chords, the likes of which Richard Bishop has done commendable things with of late, and graduates to an itchy blues-rock trundle with Toth invocating: “May the water give me life / Purify me with the fire … I will meet your commands, Satan!”

Musically, Restored To One is not unique exactly – its DNA can be traced back to Jefferson Airplane, Amon Düül, Procol Harum and a bunch of other stuff from the late Sixties that featured weirdly cheerful organ parts. ‘Glory Hallelujah’ is the album’s apogee of cheerfulness, baseball-game keyboards underlining Jessica’s one-time-only adoption of a country-rock vocal style. The Middle Eastern tunings mentioned in the last paragraph return on ‘Judge Of Mankind’, which, shorn of vocals, could pass for an outtake from the recent, terrific Rangda album. Conceptually, though, this is a terrific and original idea, and while you’d be forgiven for wondering if Sabbath Assembly might want for a personality ­­– considering they’re singing words they didn’t write espousing beliefs they don’t practice – this doesn’t end up presenting a problem. Both members sound as immersed in the matters at hand as they have in past projects, and if this isn’t literally and actually the case, then you can take heart in the fact that dropping coin on this sneakingly great album won’t result in you funding the activities of a gaggle of robe-clad megalomaniac psychos.