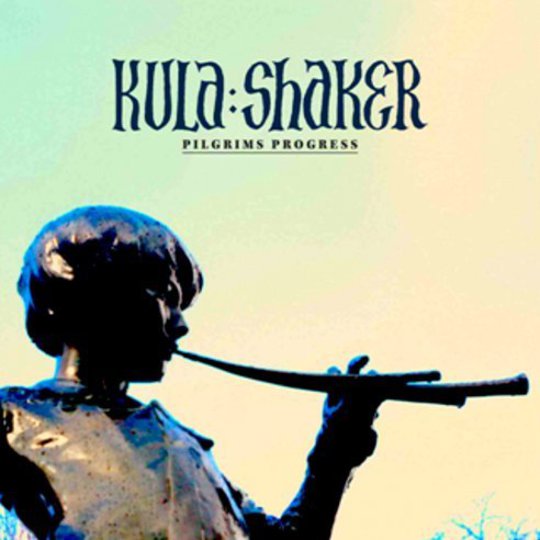 In 1997 I was ten years old and living in New Delhi. Too young and too far away to have any notion of the cultural context within which Kula Shaker emerged when 'Govinda' popped up on MTV - a curious anomaly in a sea of teeth-gnashing Bollywood songs. It was fascinating. Kula Shaker were turning mantras the likes of which had been so omnipresent to any child growing up in north Indian surrounds into believable Sixties-style psychedelia. At the time, I had no idea what 'Hare Krishnas' were but found these four odd English chaps wholly charming and sincerely appreciated the effort they put into making sure their Sanskrit was impeccable as they diligently differentiated between t, th, tth, thh, d, dh, ddh, dhh etc. etc.

It was a couple of years later that I learned that it was politically incorrect to be a fan - at least in the UK. Figuring my favourite musical country must know what it was on about, I gave them a fresh, more critical listen. And I STILL liked them. Make of that what you will but know that as an integral part of my growing up, there is no way I will ever lose my affections for KS.

Though - how can anyone not instantly love the band that made this song? That's just cold.

Pilgrims Progress is quintessentially Kula Shaker Deux, post Jay 'I’m with Oasis' Darlington's departure and with the addition of Harry Broadbent. The large gap between Avatars One and Two of the band has shown through in their recent releases. Strangefolk was a notable curiosity - it was definitely Kula Shaker, but it also wasn't quite. Avatar Two is more adventurous, supplementing their usual tendencies towards Indian spirituality with a sudden interest in Greek mythology and Shakespearean tragedy.

I don't think I've ever heard Kula Shaker quite this morbid, either. They've decided to let a song called 'Peter Pan R.I.P.' lead the publicity. A couple of ominously rumbling cellos nearly overshadow the voice delivering Barrie’s hero’s eulogy. It is a strangely endearing listen with the melody travelling to match the lyrics, cellos slinking back next to more respectful violins and an accompanying percussive jangle, only to take over once again at the close where the contrast with Crispian’s falsetto is more comfortable.

There's something terrifying about the third track as well - the way it starts with a comically chilling voice, that of a 'witch' apparently, speaking to a king. She gleefully reassures him of her intentions to suckle several young children before releasing a maniacal low-budget-Hindi-film laugh. On that perky (sarcasm) note starts the perky (not sarcasm) 'Modern Blues' – your typical light-hearted courtship-song (“I’ve got the modern blues for you, honey!”) that decides to use the witch-laugh as sporadic percussion. It would be great to be able to sit back and enjoy the old-school cheeriness of the track (it’s even got “baa-buh-buh-baa”s!) but that eerie opening leaves you a bit... you know... on edge.

Then 'Only Love' arrives on the scene and - oh! - it's Kula Shaker of yore! The one that impractically but SO earnestly spreads the message of love - the answer to all the world’s woes - as it twirls around a sunlit meadow encircled by a posse of exuberant hippie-types cheering it on. 'Only Love' also introduces the compulsory trained Indian vocalist, and the end result is a heart-meltingly sweet tune.

For all their foreignness, the Shakers are admirably adept in their sitar-tabla placement as demonstrated by the next track. 'All Dressed Up And Ready' skirts around a semi-elaborate acoustic finger-picking pattern supported what sounds like a double-bass, and then falls straight into a spinning psychedelic vortex flaunting a Sixties jangle very similar to the one that coloured the sounds of KS ver 1.0, moving from thoughtful and mellow to carelessly buoyant and energetic. Playfully innocent, like its predecessor, the smile these two songs plant on your mug starts to fade when 'Cavalry' sidles up to you. The name says it all really - this From-a-Soldier's-POV track is well-intentioned but lyrically weak and conceptually tired. And it sounds a more like it was recorded on the couch. The home-recording suspicion only grows stronger when 'Ruby' starts up. A pleasant song in its simplicity, with muted percussion, natural, gentle lyrics and a cello amping its attractiveness factor up a couple of notches, 'Ruby's only downfall is the mixing that leaves it feeling slightly raw; a little bit hollow and echo-y.

Fortunately, the tracks that follow are more expertly produced – they’re clear and their individual layers ‘pop’ smartly. A word or more must be devoted (pun?) to 'Figure It Out' - favourited immediately because of the lovely juxtaposition the dilruba and 'Hey Krishna' mantra offer the imposing guitar and voice, ostensibly soothing the aggression radiating from their western counterparts.

Pilgrims Progress is an album with a plan. That plan is to not have a plan. It follows a pattern that involves switching things around every couple of songs from morbid to cheery to serious to spaghetti western (see: 'The Brave Need A Maid' and ‘To Wait Til I Come’). It's like KS decided to find out definitively what they were capable of. And impressively enough, they pull it off. There are little embellishments everywhere, like the striking reverse keys in ‘Winter’s Call’ that tease you for a moment before vanishing behind a translucent power chord curtain. The exotic instrumentation is not as in your face as it is in their first two albums, and the influences are insanely varied. I don’t know what the current viewpoint is on Kula Shaker, but I remain a loyal fangirl.

A Tribute To Roky Erickson & The 13th Floor Elevators