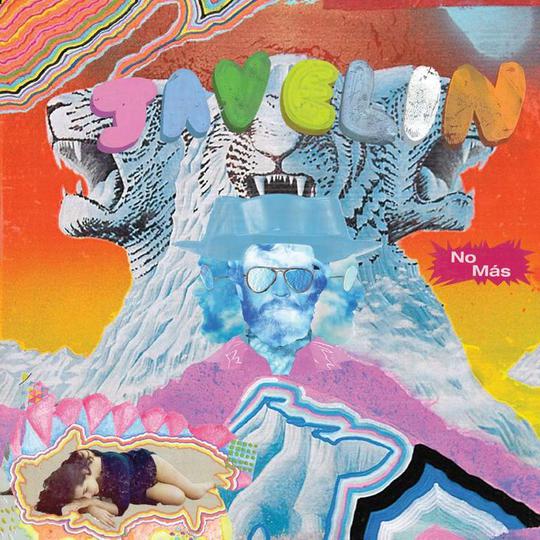 That pounding of hooves you can hear is the sound of impatient music fans charging toward their computers, demanding to hear new artists approximately 0.333 seconds after their names have floated out into the blogosphere. Take Javelin, for example. George Langford and Tom van Buskirk are two crate digging cousins from New York, who swiftly released an entire album of demos titled Jamz n Jemz in 2009 after their name bubbled to the surface. Now, less than a year later, we get their proper full-length debut, No Más, which includes many reworked versions of the Jamz n Jemz tracks. It’s almost as though someone sent back No Más in 2009 and told Javelin we needed to see how they sketched out the diagrammatical workings of the album before it was released.

Langford and van Buskirk roughly fit into the kitchen sink sampling lineage that includes work by Steinski, Coldcut and the Avalanches. But Javelin’s aesthetic is less of a full-blown clarion call to party and more of a slow-build mid-tempo segue into something else. It could either work as perfect going out music or as a pre-comedown cipher into the twilight hours. There’s little doubt that Javelin are obsessed with old school hip-hop of an ‘80s vintage, but occasionally they dip into other genres, such as their heavy borrowing from Stephin Merritt on ‘Mossy Woodland’ and the breezy heliumized pop vocal hooks of ‘Oh! Centra’.

The most immediate difference between Jamz n Jemz and No Más is a cleansing of the sound, with much of the lo-fi gunk and distortion removed and replaced with a buffed up sheen. Similar to the other Jamz n Jemz tracks here, opener ‘Vibrationz’ is the same but longer, with Javelin extending out their most popular song while still retaining the warmth and feel of the original. It’s resolutely nostalgic, and it’s no coincidence that their sound resembles some half remembered summer jam spooled through an old tape machine—like much of their work, Langford and van Buskirk filtered the stabs of house-y piano and analogue synth of ‘Vibrationz’ through the speakers of their expansive collection of old boomboxes during production.

Sometimes they head back to the skittish Javelin blueprint sound of yore via a number of songs that fail to make it over the two-minute mark, but for the most part this plays out like a collection of extended 12-inch remixes. When it works, it’s hard to imagine a more perfect soundtrack to the onrush of summer. ‘On It On It’ gives van Buskirk a chance to live out his falsettoed Prince fantasies over rattled beats and corkscrewing synth lines; ‘We Ah Wi’ and ‘Moscow 1980’ are compressed mini-motorik road trip soundtracks; ‘Tell Me, What Will It Be?’ is a sentimental journey back to the kind of sound De La Soul were reaching for in their ‘D.A.I.S.Y. Age’ era.

Occasionally, Javelin’s impulse to delve into the past gets the better of them and they lapse into parody. ‘The Merkin Jerk’ simply resembles a return to the quirky Moog territory of Pierre Henry and Michel Colombier’s classic ‘Psyché Rock’, while ‘C Town’ is a piece of Tipsy influenced lounge-esque kitsch that doesn’t add much to the body of work built up by the multitude of electronic artists who have dipped a toe into similar waters. Javelin’s music really works when they keep it simple and resist the urge to tamper by piling up songs with odd quirks and misshapen configurations. ‘Off My Mind’, for example, is a neatly skewed and scratchy pop song that wouldn’t have sounded out of place amid the gleeful experimentation of Beck’s Stereopathetic Soulmanure.

Javelin can resemble a band straining under the weight of their own (mostly) good ideas. There’s so much to take in, so many different avenues explored, so few genres that haven’t been picked up and squeezed of all their latent potential. By the time No Más gets to the elliptical trample through some of Motown’s greatest conceits in the shape of ‘Shadow Heart’, which is the thirteenth track (of fifteen) here, we’re encroaching on the kind of manic genre hopping of Since I Left You or Paul’s Boutique. Javelin don’t yet possess the same kind of wit and invention of their most obvious forbearers, but there’s enormous potential here, and the biggest compliment that can be paid to No Más is that it will sound best when reduced down to an audio tape and shoved into one of the boomboxes that Langford and van Buskirk so slavishly worship.

The Fall at Keele University, , Sun 02 May