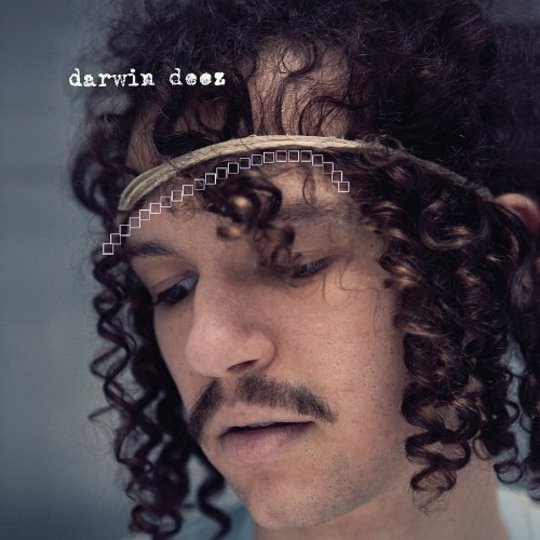 The amateur psychiatrist in me thinks that Darwin Deez might have a bit of a complex. His bio paints a picture of a man doing everything he can to be seen as ‘a bit different.’ Apparently the guy plays a four-string guitar set to his own ‘secret’ tuning and has a penchant for bursting into choreographed dance routines during live shows. Even more telling is that in all photos he can invariably be seen sporting a large jewfro, pencil-thin moustache and some form of sweatband.

Maybe it’s a case of over-compensation, as on-the-whole Deez’s full-length, full-band debut is a pretty straightforward example of modern New York-born indie-rock. If, as an experiment, you were to draw a Venn diagram plotting the musical styles of, let’s say, Vampire Weekend, Yeasayer and The Strokes and then tried to fit Darwin Deez onto it he’d always end up inhabiting the heavily shaded area right in the middle.

Not that this is necessarily a bad place to inhabit, a fact that, when Deez is at his best, he proves with aplomb. Take album opener (and 2009 breakthrough mini-hit) ‘Constellations.’ It’s a real simple affair: a poppy melody drawled over a few choppy guitar chords and drum machine beat. It’s a familiar sound and you’ll probably feel like you’ve heard it before whether you actually have or not. But that’s fine, because it’s a great slice of DIY indie-pop and that’s something that even the most cynical among us can appreciate.

The problem lies in that Darwin Deez rarely strays from this formula and, simple as it may be in theory, it’s tricky to pull off 10 straight-forward songs in a row. ‘Deep Sea Divers’ follows up the opener in a fairly similar, marginally more downbeat manner and just about gets away with it but by about halfway through third track ‘The City’ the whole routine begins to lose momentum leaving the songs desperately crying out for some new ideas.

It’s in this manner that the record continues; pretty much the same fairly average song played a number of times at slightly different speeds with little attempt at variation. ‘Suicide Song’ is neither the angst-fest it promises to be or upbeat enough for its title to be considered ironic; ‘Up in the Clouds’ floats along like it can’t really be bothered to reach its full potential and ‘The Bomb Song’ is mundane rather than explosive. ‘DNA’ raises standards a little, but flanked by similar, weaker tunes it doesn’t have the power to stop the album’s decline.

It’s only as the record reaches its end – track nine of ten to be precise – that things pick up again. In fact the tail end of the record is by far its high point. ‘Radar Detector,’ Deez’s recent chart-bothering single (number 62, fact fans) takes what ‘Constellations’ achieved eight songs earlier, speeds it up, breathes new life into it and creates a great song. It’s not exactly a deviation from the formula but suddenly Deez is playing with passion and conviction.

Final number ‘Bad Day’ keeps the bar raised, injecting a bit of funk into Deez’s normally straight-up rhythm section and, most noticeably, it's the first time he seems to be singing about something he actually cares about.

It’s difficult to tell whether saving these two best tracks to the end is a shrewd move on Deez’s part or a complete waste. On the one hand if they had been placed earlier on in the album’s running order then it would have rendered the latter half of the record almost entirely pointless. But then again, by making the listener wade through half an hour of filler to reach them, he may be preventing the less tenacious music fans out there from ever getting that far.

There’s an absolutely great EP somewhere amongst the length of Darwin Deez’s debut, it’s just unfortunate that it’s been distilled into a sub-par full-length. Love or loathe the decline of traditional record shopping this is precisely the sort of record that those ‘buy track’ buttons on iTunes were made for.