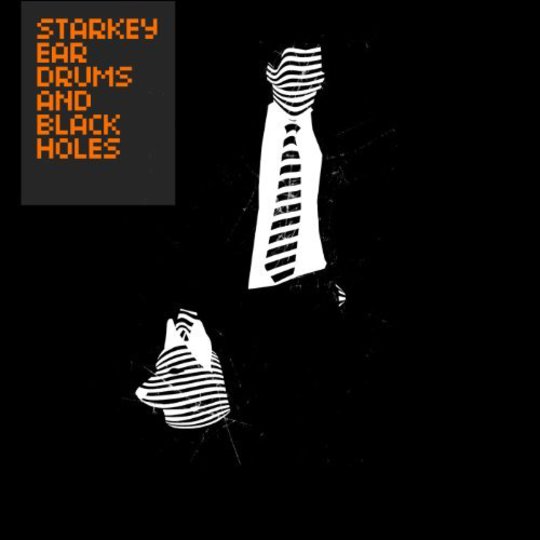 While many are suspicious of producers who assign their music its own genre tag - ‘street bass’ in this instance - it does make a certain sense for a dude who seems to be cribbing from dubstep, last-decade electronica, grime, G-funk, r&b and Baltimore club, without fitting into any of them for more than a minute or two. From Philadelphia, where him and his pals have spent the last six years or so throwing parties to showcase genres that would otherwise go unraved to in the city, Paul ‘Starkey’ Geissinger goes against the grain of American dance producers by cribbing from the last decade of British invention. Rest assured this is a bit more substantial than Snoop Dogg sniffing round Chase & Status, and other such unlikely linkage.

A title like ‘OK Luv’, which wordlessly opens the second Starkey album Ear Drums and Black Holes sounds like it should belong to a semi-throwaway grime instrumental from about six years ago. Perhaps Starkey is aware of this: you could almost believe it’d been rescued from such a purgatory, with its trilling Eighties keys, synthetic, dulled pads and video game fizz-noize. It serves to inform you that the producer is still keen to get in your face with barraging largeness, and that he can still do this with panache that more or less chases away what reservations you might have about bleach-blond flesh columns in Superdry hoodies shoving each other around in anticipation of “BIG FUCKIN’ WOBBLERS”. Nevertheless, there’s still a feel of aggression to cuts like ‘Multidial’ that other children of dubstep tagged as Innovators right now – Ikonika, Cooly G, Joy Orbison, Joker – don’t tend to approach.

This is a long old record at 66 minutes – Ephemeral Exhibits, his debut artist album from late 2008, was less than two-thirds that length – and one that a ruthless vinyl-saving expert could comfortably edit down. Still, the time has at least been used to demonstrate Starkey’s widening palette – there’s more variety, more light and shade than might have been expected based on earlier productions. Sometimes, as on ‘Spacecraft’, the light and shade trade blows with each other; the point where it turns from from a Rag & Bone Records-style bass assault into a low-lit sliver of neo-soul would be weird as hell in a club, but underlines the feeling that this is at least partly an album intended for home listening.

I interviewed Starkey around the time of Ephemeral Exhibits, which was an entirely instrumental album and felt like it shouldn’t be. Its creator said he’d have loved to get vocalists on board, but the album had been thrown together in a bit of a rush; Ear Drums... goes some way to making up for this by adding vocals to five tracks. Big names aren’t the order of the day. Texan undie MC Cerebral Vortex’s highest profile spot until this was on a Robot Koch EP (I know, right?), but he works well with the woodblock rattles and vulgar trance-rap synths of ‘Murderous Words’; likewise ‘Club Games’, which pits him against an autotuned Buddy Leezle and oily synth frottage of the type that spattered last year’s Hudson Mohawke album.

The London grime scene that Starkey has cheerfully repped for, albeit as an outsider, is afforded a tangible connection on ‘Numb’, which finds P-Money introverted and vulnerable, rather than primed for a clash: “I plug in my headphones and zone out to the beat of the drum.” Perhaps most intriguingly, if not excitingly, two tracks with mellifluous female voices give Starkey a chance to prove he can be more butterfly than bee (he has a not-too-distant past as a classical composer): ‘Stars’ is a showcase for the lush if Björk-ish vox of Anneka, who’s appeared on a few other Planet Mu releases, and Japanese singer Kiki Hitomi has an oddly transient presence on ‘New Cities’, flickering between the forefront and background of the track’s mutated synthpop.

Lauding Ear Drums... does not come without its misgivings. It’s too long, as previously noted; sometimes its dedication to DJ-friendly efficiency leaves it sounding more like unlamented nu-skool breaks flotsam than any of Starkey’s stated influences (you know, the ones that would maintain his tastemaker seal of approval). Perhaps a small part of us is reacting to the intrigue factor of an American working with grime and dubstep influences at all, before considering whether he’s using them well. And then you listen again, and it turns out that he is.