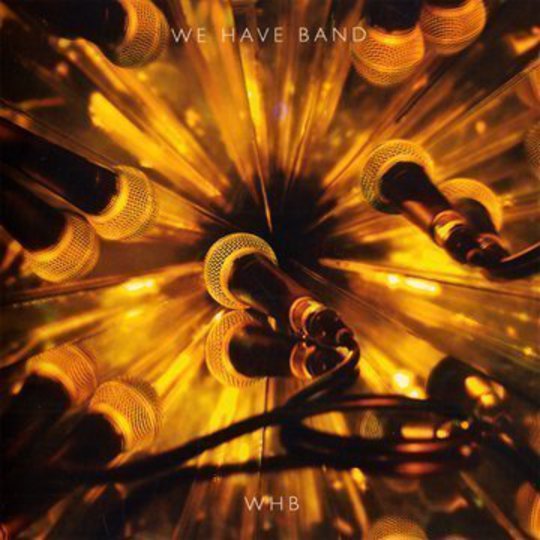 The problem with being a buzz band early on is that by the time you get round to releasing a debut album that buzz can be dead and gone and you can end up looking terribly unfashionable all of a sudden. This is particularly of concern if you're a dance-inclined act, where scenes and fads change so quick that it is singles and remixes that really define musical fashion. This is precisely the apprehension one may have about London-by-way-of-Manchester trio We Have Band. A buzz-band about two years ago, their singles to date have marked them out as dancefloor ready disco-savvy punk-funkers, while a dalliance with Kitsuné Maison (single 'Hear It In the Cans' featured on their sixth compilation) immediately invites comparisons to La Roux and, perhaps more appropriately, Chew Lips.

It is therefore an extremely pleasant surprise that the opening two tracks of WBH (take a guess) rather confound these expectations. 'Piano' creeps along seedily on a repetitive ascending, then descending, four note synth bassline redolent of late Eighties Depeche Mode, but is lent a graceful poise by the titular instrument and darkly cinematic strings lurking in the background. 'Buffet' paddles along gently on a ticking drum machine beat, tentative bass and guitars with a vaguely eastern psychadelic chime to them, before blooming in life with gorgeous washes of synth strings. The real revelation however, are the hypnotic vocals of Darren Bancroft, his low register voice having the urbane, but honest charm of Guy Garvey, something not readily appreciable on previous singles. These two tracks are something of a false dawn, however, with the majority of the album bearing greater similarities to the energetic disco-rock of 'Oh!'.

This is no bad thing either as evidenced by the hedonistic energy of recent single 'Divisive', a densely layered concoction of Rapture-esque punk-funk bass and percussion, a near relentless 'Zero'-esque synth pulse and vocal duties shared between the trio, coming together for a unified chant of "We're all divisive/You take me out this way." The aforementioned 'Oh!' is an irresistible slice of rattling punk-funk and perhaps best demonstrates the vocal abilities of the trio; Thomas W-P inhabits the verses in innocent boy-child mode giving the chorus over to his wife Dede and Bancroft to bounce "Ohs" off each other like a game of vocal Pong, with the range of vocal styles not dissimilar to Hot Chip. This sharing of singing duties can sometimes leave the songs feeling impersonal due to a lack of one definitive voice, but it also provides many of the album's highlights and indeed rescues some of the less musically captivating moments; 'Love, What You Doing?' is rather run-of-the-mill Noughties electro-indie in its standard issue octave straddling bassline and hi-hat shuffle, but the moment where the trio harmonise on the chorus is undeniably stirring as they form an androgynous chorus that recalls Dare!-era Human League.

Musically the main problem with WBH is over-familiarity. Almost every aspect of We Have Band's sound can be traced to another act from the past seven years. Obviously it's still easy enough to enjoy songs regardless of there being a precedent for them; the fact that 'You Came Out' kinda sounds like a Debbie Harry wannabe singing over LCD Soundsystem's 'Time To Get Away' and the fact that 'Hear It In the Cans' sounds like something The Faint did six years ago (albeit with less impressive vocals) won't prevent you from dancing either song deliriously. The problem is not so much that they wear their influences on their sleeves, but just that they cannot match these influences for personality, pathos or pioneering spirit.

That said there are tracks where We Have Band prove themselves capable of having an effect on more than just your feet. The way the ominous fuzzy verses of 'Centrefolds and Empty Screens' glide gracefully into the urgently euphoric chorus of serrated guitars and restless bleeps is simply beautiful and there's a tangible desperation in Bancroft's voice when he sings "For all the lies and all these needs, We've been around and all we see are centrefolds and empty screens, we've been around what do you mean.". Meanwhile, 'How To Make Friends' is We Have Band at their best; an exotic blend of tropical percussion tribal toms, funereal organ and astounding vocal interplay between the two male vocalists, W-P providing the gentle harmonies over which Bancroft bellows his heart out.

Ultimately, although WHB is record which is slightly lacking in the verve and originality that would inspire people to really take the band to heart, it is certainly an admirable collection of finely constructed electro-pop songs. On closing track 'Hero Knows' they state "We're not here for duration. While it would be nice to see where We Have Band can take themselves, WBH is a record for losing yourself to the moment, to the rhythm, to the beat, and at its best renders all concerns about influences and musical scenes null and void.