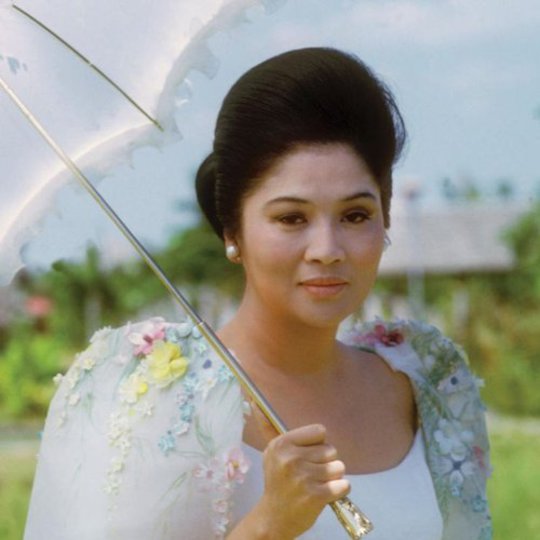 If David Byrne has never done anything quite like Here Lies Love before (I suppose a smartarse could draw some parallels to the cast recording of True Stories), it’s still fair to say that this record is exactly the type of thing expected from him. From the baffling fraughtness of early Talking Heads to converting London’s Roundhouse into a giant musical instrument last summer, Byrne’s career has defined by a very cerebral, very dedicated form of weirdness, one that seems antithetical to the notion of ‘wackiness’.

Thus Here Lies Love - a double album about the rise and fall of Imelda Marcos, partly written in the disco idiom, and featuring a quite mind-boggling array of special guests – doesn’t seem particularly unexpected, just the sort of thing that David Byrne does. What is rather eccentric is his choice of chief collaborator. Whatever you think of Fatboy Slim, you’re unlikely to hold him up as the world’s greatest disco producer. Certainly you’d think the New York-dwelling Byrne might have found somebody closer to home to trick out Here Lies Love with the requisite Studio 54 stylings (Marcos having been a fan of the NYC nightspot). Then again, you’d have to look back a very long time to find a David Byrne musical project that couldn’t be reasonably summed up with the adjective ‘tasteful’; he was never going to team up with Mike Simonetti here, more’s the pity. In any case, what we have here are 22 tracks that drift between the lush tropicana of Byrne’s ‘proper’ solo material, and a rubbery take on disco clearly somewhat indebted to the choppier rhythms of the new wave. There’s rarely a moment when anything threatens to blow your head off with innovation, virtuosity, or melody, but at the same time it’s accomplished and unindulgent, dynamic but restrained rhythms smoothly traversing an array of luxurious strings and punchy electronic swooshes.

And in some ways that’s the review there, as Here Lies Love’s concurrent failure and triumph is that neither the concept nor the eyepopping volumes of special guests have that much impact on the record as a whole. This is quite impressive considering the castlist consists of (deep breath): Florence Welch, Candie Payne, St Vincent, Tori Amos, Martha Wainwright, Nellie McKay, Steve Earle, Cyndi Lauper, Alison Moorer, Charmaine Clamor, Roisin Murphy, Camille, Theresa Andersson, Sharon Jones, Alice Russell, Kate Pierson, Sia, Santigold, Nicole Atkins, Natalie Merchant and Shara Worden.

If you actually bothered to read all those names, it’s likely they made more of an impression than they will on record. Mostly fluting-voiced female singers with an already similar range, Here Lies Love further homogenises its star cast, giving them Byrne’s lyrics to sing and casting them all as the notoriously crass former first lady of the Philippines. Well, probably: Byrne hardly offers a history lesson here. The lyrics dispense with a lot of the details of Marcos's life (no shoe collection), and don't try to capture her mannerisms, to the point it’s questionable why exactly female vocalists were so crucial. Instead the focus is on what Byrne appears to have decreed to be the fundamentals of her personality, namely a faintly sociopathic desire to be liked that led to her acting like a massive douche. If you are familiar with the specifics of her reign, then you’ll probably be mildly delighted/wildly affronted by such moments as the Natalie Merchant-sung ‘Order 1081’, a sublime whirl of strings that surely constitutes the best faux-power ballad about the benefits of illegally imposing martial law ever written (“got to stop all this confusion, gotta wipe away the scum, and the way to make it happen: order 1081”). For the most part, though, it all sinks into one big whole with comparatively little sense of narrative and few real stand-out turns. In some ways this is a blessing. Certainly it’s relieving that Florence doesn’t seize the opportunity to bellow her lungs out at top volume, and in general it’s infinitely more pleasant than any double concept album has a right to be. At the same time one can’t help but be drawn to the tracks that break the genteel air. For this reason Byrne’s two vocal turns are easily the best, the hissed, paranoid funk of ‘American Troglodyte’ (“Americans are surfing that internet, Americans are listing to 50 Cent” – not a period piece, then) and ‘Seven Years’, where his quavering croon finds itself impaled by Shara Worden’s icy keen, the most affecting guest turn on the record.

Ultimately there are only so many excuses you can make for the fact Here Lies Love isn’t an out there masterpiece, merely a somewhat outré easy listening album. But Byrne got the out there masterpieces out of his system decades ago. These days he’s a beloved elder statesmen figure who doesn't so much innovate as potter: Here Lies Love is exactly the sort of thing he ought to be doing.