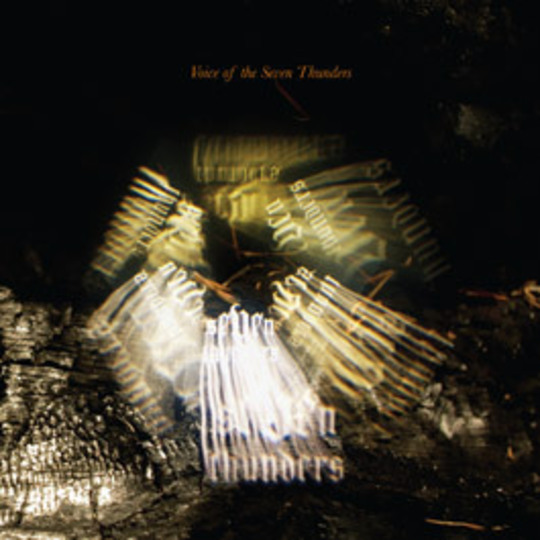 Bolton-based guitarist Rick Tomlinson couldn’t have picked a better name than Voice Of The Seven Woods when he first made an impression back in 2007; if ever there was a record that evoked the sound of a mysterious Tolkien-esque forest, it was his self-titled debut. All deftly finger-picked acoustics and hushed Nick Drake-like vocals, it was a bewitching listen, made all the more intriguing by the hints at darker psychedelic vibes that lurked around the record’s edges. It also sounded defiantly hand-crafted, the sound of Tomlinson, partner in crime Chris Walmsley and a couple of other wide-eyed enthusiasts weaving together their wispy melodies.

With no other studio release under that name since then, the arrival of a record bearing the title of Voice Of The Seven Thunders raises some questions: is this the same act? Why the slight but significant change of name? If it’s the same musicians, then what’s the difference?

The answer to these questions arrives appromimately 15 seconds into Voice Of The Seven Thunders as the deceptively slight ‘Open Lighted Doorway’ gives way to mighty THWACK of ‘Kommune.’ With a massive blast of drums, wavy Eastern rhythms wafting straight out of a worn copy of Houses Of The Holy, and the kind of fuzzed-up, in-your-face psychedelic guitar solos that would make ex-hippy dads swear ‘they don’t make em like that any more’, the second track takes your breath away.

And so it goes, with only the briefest respite from the psychedelic onslaught provided by the occasion acoustic interlude. If Voice Of The Seven Woods was music to sit idly by a stream by, Voice Of The Seven Thunders contains sounds to drive recklessly to – ‘The Burning Mountain’ virtually compels the listener to grab the nearest form of transport, hot wire it and race incessantly towards Mordor.

Of course, louder, faster and heavier doesn’t necessarily mean better when it comes to accomplished folk musicians, and there’ll probably be a couple of fans initially disappointed by Tomlinson’s turn towards rock’s startling dynamics. They’d be wrong to feel that way though – he returns to the beautifully sparse, fluid acoustic stuff on ‘Dry Leaves’ before revving the engines once again, whilst towards the album’s close ‘Cylinders’ finds Tomlinson borrowing from electronic and ambient worlds to create an epic piece of musical texture.

And, after the initial shock, there’s plenty of beauty to be found beneath the muscular dynamics. Tomlinson’s playing is an absolute joy to hear, whether you’re nodding slowly or thrashing your head around wildly, and the band he’s got billowing up a storm behind him aren’t half bad either. Whether it’s Seven Woods or Seven Thunders, this particular guitarist is brewing up something extraordinary amidst the hills of Lancashire.