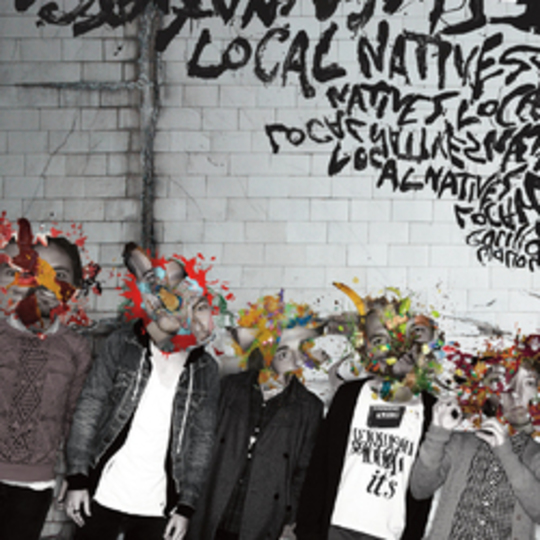 Californian five-piece Local Natives count themselves lucky; lucky that they were able to play at this year’s South By Southwest festival, lucky that “some dude” happened upon the bike shop they were playing in, lucky that he liked them enough to stay for their set and lucky that this “dude” turned out to work for the NME.

Luck is a subjective concept though.

There are, for starters, the obligatory comparisons and copy-cat claims. I’m not sure I’ve seen or heard a description that doesn’t utilise the words 'Fleet' and 'Foxes' at some point within its commentary. And yes, I’m aware that in saying this, I too am conforming to that trend. At any rate, not to mention the slur against Local Natives’ originality, it seems to me that this buzz band of SXSW ’09 have a hard act to follow before they’ve even begun.

Personally, I like to think you make your own luck. In the words of Ray Kroc, founder of the McNightmare fast food franchise, “Luck is a dividend of sweat. The more you sweat, the luckier you get.” and while six odd years of hard graft and a DIY approach may seem like natural dedication when you’re committed to your art, no outsider can deny that Local Natives have sweated. A lot.

Despite this, somehow Gorilla Manor feels easy. Pristine and mature, it clouts the listener with a thudding barrage of vital guitar hooks and layered percussion; a dynamic product of accomplished creation, which sounds both radiant and wretched as it traces around themes of love and loss. Lyrics open windows on brief moments in a person’s life, often with a sweet perceptiveness that makes you smile. Polished and considered, this does not feel like a young band’s debut.

Opener ‘Wide Eyes’ drives forward optimistically as each band member joins the fold. As a five-piece of multi-instrumentalists, this, like many of the songs, feels brimming and complete. Insistent and purposeful, a rousing spirit develops chapter by chapter, breaking down part way to the simple rhythm and satisfying crack of sticks against drum rim, before building once more to a pounding climax.

Announcing itself with wolfish cries, the second song, ‘Airplanes’, reminds me that, serious as they may be about their ambitions as a band, this is still a bunch of young friends living out a dream. As Kelcey Ayer (guitars, synth, vocals, drums... ) admits, their exacting standards mean they can be “pretty picky” when it comes to production, but they also relish the process and can equally be “super-silly” at times (bless his cottons). That youthful outlook exudes from each track and you know this is about more than money and fame.

Urgent, adrenaline-upping single, ‘Camera Talk’, is undoubtedly the song which has inspired people’s Vampire Weekend, calypso comparisons. Meanwhile their own take on Talking Heads' ‘Warning Sign’ and the slightly off-track, Cheers-bar tune, ‘Who Knows Who Cares’, show different moods and styles bleeding into the album, all the time maintaining a common thread of Nativeness. In fact this is part of the album’s charm. A jumble of contradictions, the songs have light and shade, they are glossy yet capture a sense of the energy in live shows, and while the album may well appeal to parents (I took mine home with Crosby, Stills, Nash and Young in mind), it also captures the contemporary, particularly on some of the more jagged guitar tracks, like ‘Wide Eyes’ and ‘Sun Hands’.

‘Cubism Dream’ is a charming example of Local Natives' storytelling, unwrapping a tale of cross-continental romancing, perfectly framed by Taylor Rice’s crisp, clear vocals and delicate piano melody. Similarly the potent multi-part harmonies on ‘World News’ and ‘Cards and Quarters’ invoke indulgent emotions of nostalgia, melancholy and hope amongst a stream of striking images, and I can’t help admire the effortless vocals as they chorus “Steal away, you and me, to a cave, made of sheets”.

Considering the highs and lows of the album, I struggle to identify specific tracks for marked praise or criticism. With repeated listens, each has grown on me a little more. But let’s make no mistake about it; this is no niche, underground marvel. Local Natives revel in traditional song writing with a twist of lime, and the result is a stirring album tinged with a touch of pop. Reportedly taking as much time to arrange harmonies as write the music, Gorilla Manor is a definite labour of love, and you know what they say; you get out what you put in. Though it may not be revolutionary, for me, this album is a little gem.