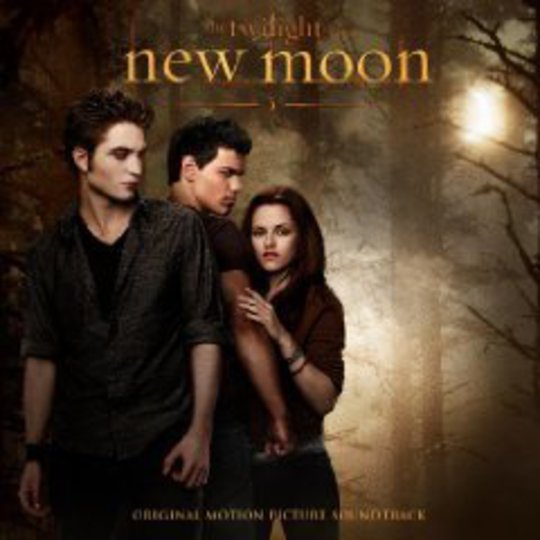 It would be foolish to attempt to dismiss the influence and commercial success of the Twilight franchise; whilst prominent writers such as Stephen King have questioned Stephanie Meyer’s abilities as a novelist and various critics have written off the film adaptations as moronic teenage pish, the modern day love story between the willowy Bella Swan and brooding vampire Edward Cullen has certainly captured the hearts of a generation that needed something neoteric to feast upon after Harry Potter.

New Moon, the second film in the series is basically a story about yearning for lost love; to reflect this, the film needed a fitting soundtrack. So music supervisor Alexandra Patsavas was once again brought on board for the project after assembling the commercially successful accompaniment for the first film. Patsavas, a seasoned music supervisor, is the lady responsible for using Snow Patrol’s ‘Chasing Cars’ to amp up the tearjerk levels in the trailer for the extremely popular American Hospital Drama Grey’s Anatomy. She also selected music for The O.C., turning a lot of teens onto all the hip indie bands that performed at The Bait Shop. Essentially if she picks a song from your band and features it on screen then you are going to make a hell of a lot of new fans.

Remember that scene from Garden State when Zach Braff is sitting in a waiting room and Natalie Portman manically coerces him into listening to The Shins? We all know what that moment did for The Shins. Music is becoming an indelible part in film, both as a plot device for bringing together characters (ala 500 Days of Summer) and a illuminating force that markets the film to a media savvy, somewhat cynical audience (Juno). The movie soundtrack is once again under the spotlight.

I remember picking up a copy of The Lost Boys soundtrack when I was a kid, and fondly recall just how well the music reflected the atmosphere of the film, particularly ‘Cry Little Sister’ and Echo and the Bunnymen’s glorious cover of ‘People Are Strange’. Patsavas has done an admirable job on the New Moon soundtrack, assembling a mixture of heavyweights and hungry pretenders to capture the ‘sombre’ mood of the film.

Unsurprisingly a band Patsavas featured on television - Death Cab for Cutie - open with ‘Meet Me on the Equinox’, a track written specifically with the film in mind. It sets the pace well, and sums up the distance, and depression between two lovers, but come on, isn’t this a bit too much for a teen romance? Perhaps, though Twilight might prove to be the Romeo and Juliet of our time. *Cough* *Cough*

Let’s focus on the hits.The Killers’ ‘White Demon’ is a million miles from the usual new-wave Las Vegas pomp and glamour; Lykke Li’s bathroom lament ‘Possibility’ is haunting and Thom Yorke’s ‘Hearing Damage’ is a lesson in isolating electro despair. All of which inspire melancholic thoughts, and again fester a tone of loss, regret and separation; relatively unknown Band of Skulls serve up the delirious, bass heavy, yet delightfully sparse ‘Friends’. Emily Haines soundalike (seriously, she’s uncanny) Anya Marinas beautifully ponderous ‘Satellite Heart’ and the stirring, echoing duet ‘Rosyln’ between Bon Iver and St. Vincent are both polished efforts that add a touching minimalism to the collection that is further garnished by Black Rebel Motorcycle Club’s campfire croon ‘Done All Wrong’

Even the weaker tracks, such as the ropey glam cabaret remix of Muse’s ‘I Belong to You’ and the sub-par Strokes impression ‘Monsters’ by Hurricane Bells fail to disrupt or damage the momentum and flow of the soundtrack. When it reaches its final moments, the drama steadily builds from Sea Wolf’s enchanting ‘The Violet Hour’ to Editors closing with the stunning weepy piano ballad ‘No Sound But the Wind’.

When a soundtrack works this well, with each track slotting naturally into a strongly cohesive body of work, you begin to wonder about the clamour that is sure to come from bands and singer songwriters to put their work forward towards featuring on the next film's soundtrack. For the likes of Anya Marina and Band of Skulls, the opportunity to sit at the big table next to Thom Yorke, Grizzly Bear and The Killers could be a career altering moment, particularly when potentially these artists are not just soundtracking a popular movie franchise, but the early romantic forages of an entire generation of blood thirsty teens.