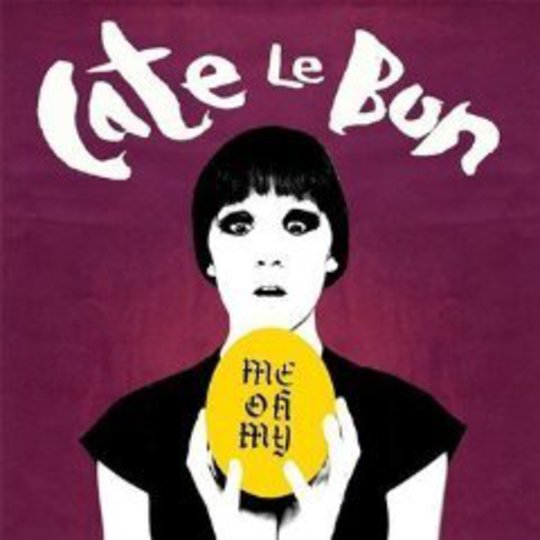 Musical endorsements are a funny thing. For every worthwhile effort put out there it seems we get Alex Turner inflicting Miles Kane on us, or even worse Kanye West’s patronage of Mr Hudson. Gruff Rhys, however, is a wise old sort and has decided to put his supportive arm around the shoulder of Cate 'I'm not related to Simon' Le Bon, a Welsh folk singer the press must be lining up to label ‘quirky’. She’s not quirky (people who befriend monkeys are quirky); however Le Bon is a wistfully entrancing talent and Me Oh My is a gentle but rewarding listen.

Fans of last year's magnificent Neon Neon album Stainless Style will already be aware of Le Bon’s work, as she provided the vocals to the slinky highlight ‘I Lust U’. The robo-slut croon shown there is not evident in the slightest on Me Oh My however, replaced instead by a delicate wave of rustic meandering and log fire balladary. Le Bon’s voice is a strange thing to summarise, in that it seems to shirk the expectancy of melody and harmony, flirting with those concepts but choosing instead to skip off into the middle distance on its own path. As a result the listener is left with a head-scratching initial listen, as a lack of recognisable signposts leaves little desire to revisit Me Oh My. However those who do venture back time after time are rewarded with the opening up of an artist who is unique and charmingly off centre.

Searching for a killer chorus on Me Oh My is a thankless and nigh on impossible task, but hidden amongst the genteel whimsy and idiosyncrasies lie a series of intriguing musical injections. From the intergalactic synths on the title track to deconstructed glam guitars on ‘Shoeing The Bones’, this is an album lifted by musical moments of inspiration. This device is best used on the frantic freakout three quarters of the way through the penultimate track ‘Burn Until The End’, which takes the ennui of just another ethereal ballad and injects it with a shot of rebellion.

Me Oh My is an album stuck somewhere between experimentation and traditional folk that benefits from both camps but is held back by refusing to have a firm footing on either side. As displayed with the Neon Neon, Le Bon has a strong and melodic voice, but the hooks are nowhere to be heard on this record. Instead the onus is on the instrumentation and general atmosphere of the songs which both excel and impress in equal measures. Neither a disaster nor a triumph Me Oh My just needs a dose of direction and style to become truly enjoyable. Gruff Rhys has backed a good one, now he just needs to show her the way forward.