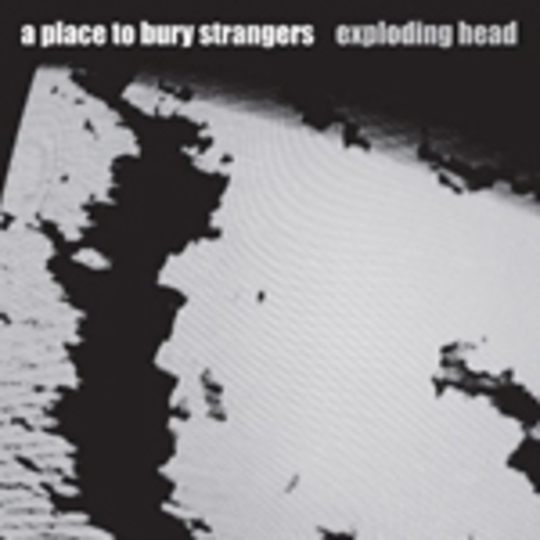 Whether or not there's a touch of irony in New York noise trio A Place To Bury Strangers naming their second album after an inherent medical condition that causes loud noises to emerge within one's own head, they certainly manage to live up to their reputation as the loudest band in their native city. That little feat, thankfully, is merely the tip of the iceberg, as Exploding Head isn't just a lesson in abstract noise, or as the band themselves like to call it, 'total sonic annihilation'. Instead they've raised the ante considerably from their first, eponymous long player, concentrated their efforts on writing several insanely catchy melodies and delivered a record that fulfills the promise shown by those early recordings. And then some...

One fact most commentators tend to gloss over when talking about Exploding Head's predecessor is that it was largely a collection of demos and outtakes, cobbled together over a three-year formative period in the band's history. Indeed, when Oliver Ackermann finally disbanded his previous outfit Skywave to launch his groundbreaking - and ultimately lucrative - effects pedal sideline Death By Audio, the last thing he probably expected was for his latest musical pastime to garner a wealth of critical acclaim, mostly acquired via cyberworld word of mouth. Although initially released as a one-of limited edition vinyl pressing, A Place To Bury Strangers proved to be one of the underground's most sought after albums of 2007 on both sides of the Atlantic, culminating in last year's re-issue and eventual worldwide record deal with Mute. With such a rapid, unplanned rise in status comes the heavy burden of expectation, but where many of their peers have buckled under such pressures, A Place To Bury Strangers appear to have taken it in their path and thrived to the point of excellence.

While some of the reference points will no doubt live with the band until they decide to call it a day, Exploding Head is a distinct progression in terms of both songs and sound. While some may have been surprised when the band announced they'd be working with a producer for the first time, the decision to employ Andy Smith - best known in recent years for his work with Paul Simon - seems to be something of a masterstroke, as there's no doubt his deft skills in the engineering department had a significant impact in determining Exploding Head's eventual sound. That is none more evident than on the album's centrepoint and ultimate stand-out moment 'Dead Beat', a song which has actually formed a focal part of their live set for a good 18 months or so. Set to what sounds like a Beach Boys melody from their surf-infused era, 'Dead Beat' builds and builds into a colossal rage, Ackermann insisting "stop playing with my heart" as the final third threatens to explode all around him. Where previously the song would have been overpowered by a combination of reverb and feedback infused gadgets, here it's allowed to breathe, even to the point of a potentially radio-friendly chorus.

And it doesn't stop there. While opener 'It Is Nothing' announces its arrival amidst a dense wall of noise, it soon gives way to a subtle verse that reaches a brutal vortex not too dissimilar to recent tour buddy Trent Reznor's latest offerings. 'In Your Heart' delves into the type of territory Andrew Eldritch might have entered if he'd recruited Kevin Shields rather than Wayne Hussey to play lead guitar on First And Last And Always. The closest Exploding Head gets to its predecessor comes in the form of 'Ego Death', the oldest track on the record and another long-term staple of the band's live set (previously entitled 'Gimme Acid'). Here, the band's penchant for carving industrial dogma into elongated slabs of white noise come to the fore, the end result not too dissimilar to 'The Falling Sun' from their first album. One major source of inspiration that also tends to be overlooked over when analysing A Place To Bury Strangers work is that of The Cure, yet here their love for Robert Smith and co's Seventeen Seconds and Faith are evident on the floating melancholia of 'Keep Slipping Away' and bass-heavy, tremelo-laden dichotomy of 'Everything Always Goes Wrong'. Although most of the focus tends to revolve around Ackermann and his aural gadgets, the often-ignored rhythm section of Jono Mofo and Jay Space come to the fore here, particularly on the latter, where the pounding drums alone could easily trigger a repeat dosage of the title's syndrome.

Ultimately, throughout its ten pieces, Exploding Head is a much more diverse collection than A Place To Bury Strangers, and far outweighs the shoegaze revivalist criticisms their detractors have labelled them with. What's more, A Place To Bury Strangers have managed to strike a perfect balance between noise and tune, and as a result created one of 2009's most ingenious records.