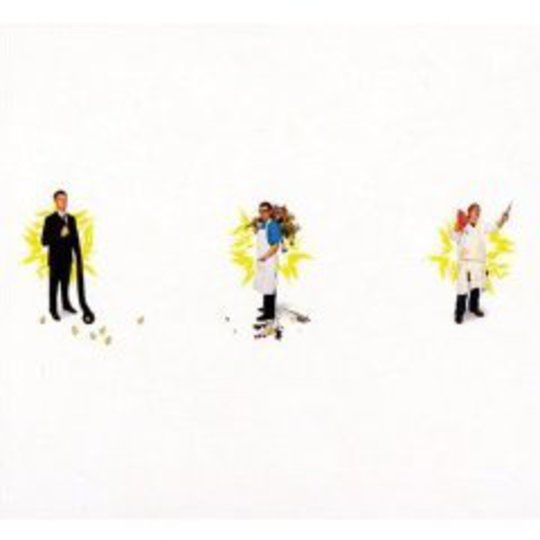 It is the historical mission of rock and roll to destabilise families. 'We Are Family' was a rallying call to those estranged by heteronormative parents, the likes of The Broken Family Band revived a vision of peripatetic familial musical artistry, The Danielson Famille dramatised carnivalesque manichean borders in the dark hinterlands of the North American family. Pop music at its best is an arena where alternative plans and configurations are performed, and the authority of what precedes us is tested.

But at the backend, behind the fantastical promises of the stage, in the carpark of realworld arrangements, heritability and lineage still figure large in popular music. The Zaks, Seans, Ziggys and Rufuses are testament to these persistent conditions of production. They fuck us up our mums and dads, and as they do so they give us their milieu, as natural and ingrained as some unwanted oaken heirloom.

The son of avant-jazz polymath Anthony, Tyondai Braxton studied composition at a prestigious US music school, as a teen going on to play the Wesleyan campus in 1998 with John Zorn - the same university at which his father still holds a Musicology professorship. The fringe experimental beginnings of Braxton Jr's career solidified with the forming of Battles, where his textural nouse could sit next to the Don Cab heritage of intricate guitar work; Warp's marketing heft along with those tortured chipmunk vocals could allow 'Atlas' to gain Skins-soundtrack entrées into mainstream consciousness.

But it's Central Market, his second full solo release, that sees him coming of age in a manner that befits the familial myth. With assistance from The Wordless Music Orchestra and Young New York City Ensemble, Braxton's album reveals itself as a mindful epic of extended forms. Seven compositions, each with their own ambitions, each licked through with alternating current, charged with sensitive ebullience, where electricity and acoustic instrumentation combine to create contemporary classical and primitivist electronica to illbient and dubstep.

'Opening Bell' opens the account with a spry collection of woodland motifs. Bird effects like errant twitter updates tweet over bulging programmed bass, light pianos haltingly repeating a Steve Reich-like minimalist refrain. Strings and woodwind chirp, lasers fire off volleys behind them. As the energy gets ramped up it and the digital effects become more pronounced it sounds like Peter and the Wolf wandering accidentally into Tron, getting twisted by the mainframe, coming out all ironic in an ECT'd daze.

Each piece staggers through swiftly shattered symphonic movements, like Kid606 on BBC2's Maestro, conducting with a laser pointer. Everything is on endless shuffle, and the margin of order to chaos often feels slight. 'Uffe's Woodshop' recalls Stravinsky, with its awkward melodic extensions and schizophrenic contrapuntalism. Sometimes the album gets glued in Wagnerian fury as on 'Platinum Rows', sometimes with the mobile spontaneity of Prokofiev or Bartok. Battles style vocal samples are employed in a manner that directly recalls forgotten Goldsmiths minimalist Andrew Poppy, who occasionally surfaces like scurf in Max Tundra samples, trademark Gregorian barks like neutered choirboys being kicked in the orchestra hits.

Towards the close, recognisably rawkish sensibilities emerge. 'J. City' heralds its rock dynamics with the reverse reverbed guitars of Primal Scream era Kevin Shields, a liquid base for a wonky halting beat and the only unchopped vocals on the album, throaty and soaring like Creed screaming King Crimson lines from a windswept hill. 'Dead Strings' contains heavy synth bass ascensions and spitting breakbeats within the looming presence of ponderous dubstep dusks, and Van Dyke Parks-esque strings lay down an ambience of a creepy Disneyfied noir.

Throughout the album, the drama of low culture vs high culture peforms its hoary dance. The ambivalent nature of 'the cinematic' always throws up questions of category, and this album covers that territory. Certainly if you strip out the gameshow lasers, Radiophonic workshop fundaments and comedy kazoos, you could have a canonisable contemporary classical piece. The primitivist mooings and bleeps, whilst threaded through the piece with structural sensitivity, can appear like decorative pieces of angelica in stark opposition to its classical meat and potatoes.

Stravinsky once said 'Art demands of the artist full consciousness before all else' and this mantra of cerebralism holds true enough for Braxton. Certainly there are ludic squawks and ironic textural messings, but throughout the sensual is held down by the structural, and the album comes across as an effort of immense thought and mind. And it is this, and also his patrilineal circumstance, that epithets like 'mastermind', 'auteur', 'genius', will be used to describe Braxton's helming of this difficult album. In cinema the 'auteur theory' of individual authorship was first expounded in the magazine Cahiers du Cinéma, as part of a sub-cultural initiative aimed at elevating cinema from a popular artform (Sartre giggling in the backrow at a Western) to one deserving of critical attention, government cash and national film institutes. While perhaps won in cinema, this battle is still very much on in music. Braxton's contemporary epic has the hallmarks of a high and low cultural crossover, joining the dots between Stravinksy, Delia Derbyshire and Battles. Like his father in jazz before him, Tyondai is furthering the cause of the pop experiment.