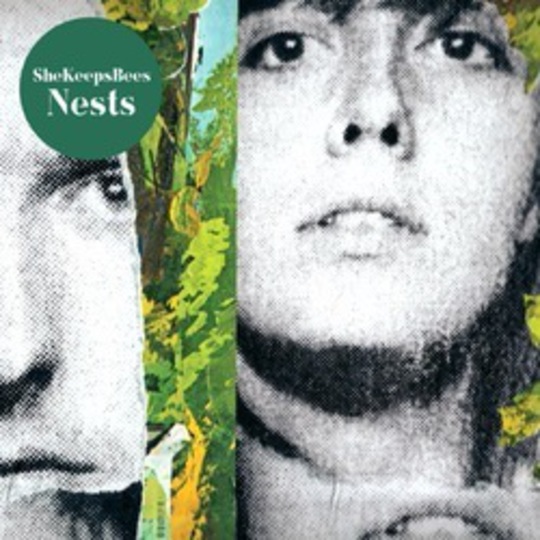 She Keeps Bees. She Keeps Bees. She Keeps Bees. She. Keeps. Bees? Putting their name aside (and perhaps their name is to blame on their location: Brooklyn) She Keeps Bees are one of the keepers (pun intended) from the BK bunch. Having formed in 2006, She of the Bee-keeping would be (on voice and guitar) Jessica Larribee, with her friend/producer/boyfriend Andy LaPlant on drums. The band themselves liken themselves to a bit of Howlin’ Wolf, PJ Harvey and Millie Johnson, but the very nature of SKB (a boy/girl duo) will automatically cast people’s minds to the hallowed White Stripes and the early Kills. You can hear the connection in the sparse, dirty tunes that are more than subconsciously driven by the energy and the tension between Jessica and Andy (or Jamie/Allison, Jack/Meg). They barely emerged from the bedroom long enough to release their first mini-LP, 2006’s Minisink Hotel (available as a bonus disk with the Rough Trade edition), which was actually recorded in a bedroom. Their four-track EP released earlier in the year, Revival, set the stall for their raw, DIY ethos and Nests continues their foray into sinister, powerfully raw blues rock.

At just under 27 minutes, Nests is nothing if not straight to the point. Its most obvious strongpoint is Jessica’s voice. She has amazing control over her vocals, able to simultaneously be fiery and reserved, seductive and vaguely crude – her voice is what breathlessly invites you into their dingy world. She ably plays a lot of similar vocal roles, different enough but all vaguely connected, from the punishing Fiona-Apple-esque siren on ‘My Last Nerve’ to the faux-romantic, drizzly-sweet on the outside, bitter on the inside ballad of a woman scorned on ‘Get Gone’, right through to the sparse, gospel ringleader of ‘Bones are Tired’. She plays ‘em all with ease befitting someone with rather more than an album and a bit to their name.

‘Focus’ begins with a brooding riff that we’ve all heard before, but if it doesn’t command your attention, well, I can’t help you because I fell for this foreboding jam hook, line, and sinker. ‘Gimme’ is the most blatantly sexual song on the album, Jessica at her fiercest, sultry and intriguing as she growls, “Gimme gimme gimme gimme / Give it to me daddy”. Annoying as some couple-bands can be, She Keeps Bees play it fairly cool – letting their chemistry and the inherent intimacy speak through the songs. ‘Wear Red’ is the most old time-y jam, kind of a campfire song – little bit psychy, lot of blues. It would be good for any kind of camping trip, complete with whiskey, to some Joshua Tree-style psychedelic desert. ‘Ribbon’ is as simple as it gets on this album, but the no frills approach mixed with the gospel-garage vocals is gold. It’s the perfect summation of She Keeps Bees: intricate without being unclear, stark without being uninteresting, and ultimately, a band to keep around.