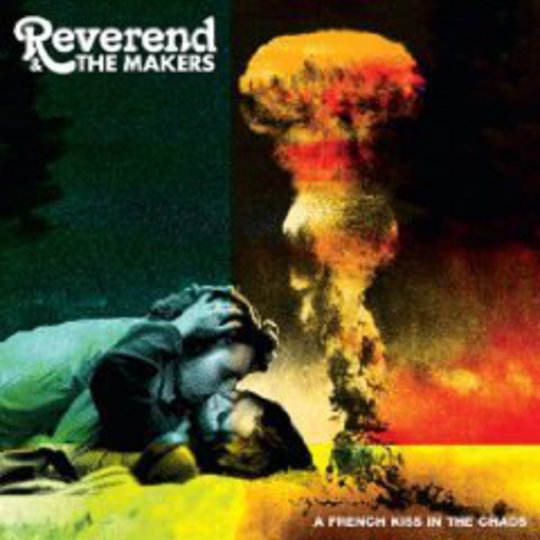 If the 'Reverend' Jon McClure is to be believed, then A French Kiss In The Chaos, Reverend And The Makers' second album, will also serve as their swansong. Last year he claimed he would quit the music industry which is making him "tired" and "ill" after making "a record that's truly artistic, which is the Reverend And The Makers album, that's artistically interesting." The Reverend has also decided to get serious, eschewing tales of provincial youth in favour of pontificating upon topics such the far right, global warming, and the media. Unfortunately the self-appointed sage of Sheffield is more likely to see eyes roll than eyebrows raise with this album dominated by uninspiring lad-rock clichés, crass political statements and empty platitudes.

Take opener 'Silence Is Talking': the instantly recognisable brass refrain of War's 'Low Rider' is tacked on to a bloke-rock standard of Stone Roses baggy beats and the sort of guitar drones Oasis try to pass of as 'psychedelic', complete with Beatles-indebted sitar. It undoubtedly sounds like it could have all the makings of a summer smash, although it's a little frantic in its execution. However, for a man who so desperately wants to "instigate debate", McClure takes this opportunity to say...well, nothing at all really. There are some vague allusions to "the man" screwing us over ("the political official might have fiddled it a little/but unfortunately nobody knows"), but the mantra "feeling love is paramount" is the sort of meaningless drivel which would sound sappy in a Coldplay ballad. It's infinitely more nauseating when bellowed as some kind of revelation of divine proportions.

Even where Reverend And The Makers succeed musically, they are repeatedly tripped up by McClure's lyrical shortcomings. A perfect example is the urgent guitar’n’glockenspiel gallop of ’Hidden Persuaders’, which has a thrilling in-the-shadows stealth and a colourful horn section - even if it sounds a little too much like McClure's buddy's band, The Last Shadow Puppets. Unfortunately the Reverend can't also emulate Alex Turner's way with words. While the fact that he has attempted to write a brief treatise on the subtle power of advertising is admirable, the chorus hook-line "you're free to do what we tell you, you're free to do as we say" is the sort of insight you'd expect from a 14-year-old who is just developing a political conscience, not a former politics student in his late twenties. The verses, meanwhile, are a jumble of cumbersome accusations aimed at the advertising industry with forced rhyme aplenty ("persuaders/infiltrate us/it's contagious"; "it's outrageous/the entertainers/fashion dictators") often only pulled off with considerable mispronunciation.

'No Woods Just Trees' and 'Professor Pickles' show that the Makers know their way round melodic muscular funk and warbly organ-led psychedelia, although they are marred by forced rhymes ("he leaves us/it's Jesus") and ridiculous alliteration ("Professor Pickles prescribing me Prozac pills"), respectively. ‘Long Long Time’ is an irritatingly dull and plodding piano ballad which recalls Embrace (yeah, that bad) whilst ‘No Soap In A Dirty War’ is the pompous attempt at gritty social realism the title suggests, its chorus refrain of “and I don’t want to get married in the same church as you all/and I can’t sleep in this bed with you anymore” coming across as particularly condescending.

It has almost become a cliché to say it but there is no doubting McClure's heart is in the right place, as evidenced by his involvement in Instigate Debate and Love Music Hate Racism. Unfortunately, good intentions provide little mitigation when execution is downright terrible and it is even more unforgivable when you are intent on "having something to say". Nowhere are McClure’s good intentions more evident than on anti-BNP song ‘Manifesto/People Shapers’ which he gave away for free back in June in the same week that the BNP won two seats in the European Parliament. Musically it is actually one of the slightly less derivative tracks, with its slow poundings toms and some atonal guitar noises which almost sound like The Mars Volta. However, as before, a slew of clumsy schoolboy political statements exhibit McClure’s naivety: “I don’t want your propaganda or your leaflet through my door/It seems that your friend hatred just don’t live here anymore”, “since when did it get passé to have something to say?” and not to mention the echoing, rallying shout of “bring it!”. Surely it would be better if the BNP just didn’t “bring it” at all?!

Ultimately, if Reverend And The Makers’ own manifesto was to make 'a record that's truly artistic' and 'artistically interesting' before retiring from the music industry, then they are going to have to give it another shot because A French Kiss In The Chaos is neither artistically interesting nor indeed very good. Unfortunately, on this evidence it seems the Reverend may never possess the talent to match his ambition, meaning he could make another five albums without fulfilling the promises made in his 2008 manifesto. Perhaps it would be best if this album was a French kiss goodbye.