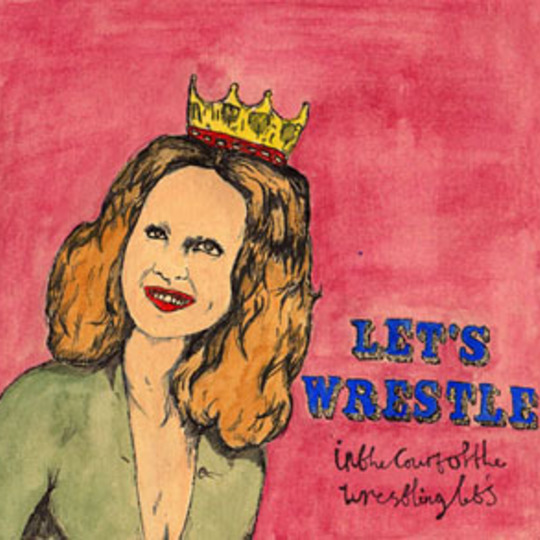 There's something just that smidgen more earnest about Let's Wrestle. More earnest than who? Well, most of their contemporaries, for a start. Bands who clearly appear to be influenced by the Americano school of guitar rock yet do not so obviously ape it. 'Taking the good and adding the English accent' is what you could say. You could also call it good, ol' fashioned punk rock. Let's go for both with the emphasis on the latter.

Regarding the English accent, there's way more than a certain charm to the lyrics, notably in the way they seem to catalogue the thoughts and inner feelings of twenty-somethings with no real job, no real direction, but a degree of pleasure and acceptance in that very fact. Let's Wrestle make music for both the recently graduated, and the 'never went to university'. It's equally for those whose arts degrees are fast becoming worthless and those whose eyes rarely see the inside of a book. But, something more primary than that, something of infinitely more importance – these fellas know how to write a tune.

These are songs which soundtrack desolate, heel-dragging, shoe-scuffing walks on pavements through discarded take-away food cartons and newspapers. 'My Schedule's “When I get home I'll put on the kettle and I'll forget and I won't make the tea” epitomises much of this ethos.

The shoulders-slumped, slouching, slacker, slobby moments are matched and balanced by more than enough obvious gaiety. 'We Are The Men You'll Grow To Love', 'In Dreams' and 'Song For Old People' – with only 'Atlantis', an interlude, in between – don't so much bounce as pogo incessantly. The first and the last in that run have enough terrace-fodder “ba-ba-ba-ba-baaaaas” and “do-der-do-do-der-do-ders” to move even the stiffest lips into a grin, surely. Heck, even 'I Won't Lie To You' could tag on to the end of that trio, and added to them it may even be the finest.

Yet there's a sound in the production which is meant to be raw, but at the same time deliberate. Not in a cynical, calculated way. In a way that makes you think they recorded everything in an empty village hall is pretty cool. Taking a kit sound straight out of the Spectorised Ramones record End Of The Century, the tubs resonate, for once, more than the peculiar lyrics of the Princess Di fanatacist in 'Diana's Hair'.

With 'In The Court Of The Wrestling Let's' everything in the previous 15 tracks gets not only turned on its head but dropped on it. From a great height. It eschews melody. The guitar work almost borders on wankery. Space-rock elements of Sixties psych don't so much creep as stomp leaden footedly into your lugs. Does it feel a little out of place? Yes. Finest four and a half minutes of Let's Wrestle's brief career? Absolutely fucking yes.

Here would normally be where the phrase '“but this is not without it's flaws' gets shoe-horned in for what is usually known as “journalistic and critical balance”. Well, yeah, this is clearly not a perfect album, but first records aren't all about deliverance as much as anticipation. 'Rough round the edges' is as much of a compliment as it is an insult for bands of this bent, in any case. In The Court Of The Wrestling Let's holds enough promise to not beat down on the guys too much. Perhaps it's five tracks too long for a debut, but you'd struggle to pick which to cut, which, I guess, means it isn't too long at all.

If their first full-length has taken the art and craft of the three-minute guitar-pop song as demonstrated, then is the only way up? It'd be a saddening thought to think that Let's Wrestle have peaked already.