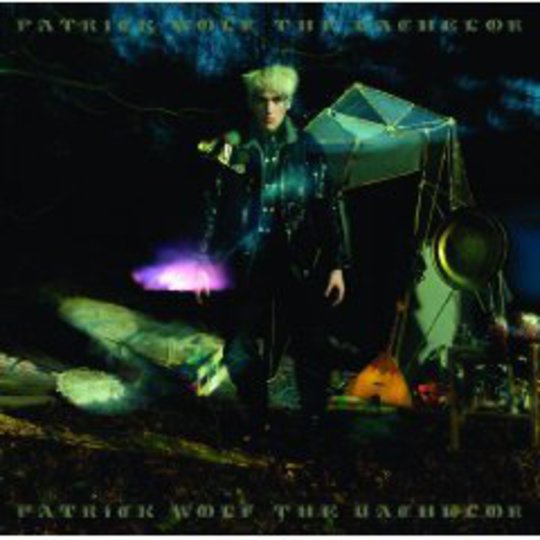 'Hate was just a failure of the imagination' - Graham Greene, The Power And The Glory

You know the rap. Patrick Wolf. Twenty-five. Blonde, currently. Generates unprecedented hyperbole – both positive and negative – in even the most measured of commentators. A photographer's field day. Morphed from an excluded, hyper-attuned kid fiddling with an Atari computer given to him by Capitol K into a flame-haired celebrity prince and guest Burberry model in a handful o' years. Rabid fan following. Even more rabid hate faction.

A truism: if your art is hated, you're doing something right.

Patrick Wolf was an inspiration to many kids my age – I was 19 when he was 22 – precisely because he'd grown through everything they – and we – were dealing with: playground abuse, the feeling of that morning when you wake up and realise your parents can do nothing to protect you.

Difference was, he'd cut loose. Out of misery and adolescent rootlessness, he had created this lyrical demi-world – one versed in folklore and in thrall to the British wilderness – in which to cocoon himself. It was our world, still, but with less of the screen glare; one seen, instead, from the carriages of sleeper trains ('Teignmouth') and the edges of cliff fells ('To The Lighthouse').

Patrick Wolf was an isolated kid who demonstrated to other isolated kids that being an outsider, being a loner, could be a powerful thing. On the cover of each of his four albums, he is stern, proud and independent, from the street urchin of Lycanthropy (2003) standing braced against judgement – the disproportion of his clothes and the prostrate camera angle creating this sort of child-giant – to the eccentric ringmaster of The Magic Position (2007), from the pale, aloof stare of Wind In The Wires (2005) to this cyber-knight avenger-...thing on The Bachelor. What he did for those who followed his lead, y'see, was prove that they could turn their liminality into bravery, their victimhood into victory.

And so, of course, a lot of people hated him – still do. Hate him. Because, simply, it's easy to resent those who break away and come back, stronger.

And no, his music – jostling with precocious ambition and cinescreen wipeouts – isn't for everyone. Admittedly, The Bachelor is by far his most grandiose and ostentatious effort to date – to the point that it occasionally teeters on the brink of embarrassing melodrama.

But his music is often the least-cited reason for Wolf-hatred, and actually – from personal experience – it seems that a deeply reprehensible seam of inverted class snobbery mines its way through the heads of many who rip him to shreds; 'cause there's something some people just can't stand about a plum-voiced boy of indeterminate sexuality from the better part of London dancing around half naked in capacious pantaloons and advocating and the spirit of being your own saviour, being your own hero. They're those same bullies, grown older (but not up).

Anyway. This is getting political. Let's talk about sounds.

If Wolf's discography has charted an ongoing struggle to settle, to sprout roots, then The Bachelor may be the first real indication that he's finally synthesising his lifelong displacement with a kind of acceptance, a sense that he – or whoever it is that he's singing about – is beginning to belong.

The Magic Position was supposed to be a record that rejoiced in 'home' – but, by the time of its completion, Wolf couldn't have been further from that ideal. 'Bluebells' and 'Magpie' – stark, ruined songs – undercut the album's Technicolor jamboree with deep-seated dissent. Their loneliness was even more crippling than anything on Wind In The Wires or Lycanthropy precisely because of their irridescent neighbours, the likes of 'Accident & Emergency' jangling away like a crass gaggle of sniggering kids in the background.

With The Bachelor, then, he set out to truly confront his origins and heritage through music. He pleads with lives cruelly cut short ('The Sun Is Often Out'), reminisces with his parents ('Thickets', 'Blackdown'), gambols and clatters and looks to “the open road” with his sister and cousins ('The Messenger'). No longer the rogue hermit-heretic of Lycanthropy or Wind In The Wires – who romanticised the spiritual homelessness of the tearaway – he is, here, the self-acknowledged epicentre of a living dynasty to which he owes time and care, and from which he cannot run.

'Home' does not necessarily signify happiness or comfort, however, and The Bachelor annotates the fluctuating, ambivalent relationship that we share with our idea of 'family'. 'Blackdown' begins as an apologetic, diaristic address to his ailing father; then, two-thirds of the way through, it shatters loose of its guilt and launches into a bristly, burgeoning denouncement of regret, bodhráns racing, the Irish whistle carousing, bodies huddling into one heaving, whooping midnight mass. Elsewhere, he tussles antlers with folksinger Eliza Carthy, her rough, bolshy vocal arguing with his stubborn “I'm not gonna marry/In the Fall/And I'm not gonna marry/In the Spring”. Throughout, the actress Tilda Swinton voices a kind of maternal but distant tough-love. 'Thickets' ties itself in knots, sees our perpetrator on the verge of running away all over again; “Mother, what have I become?”

But if The Bachelor is a tribute to the redemptive power of a family unit, of the necessity of re-learning your history, it is also a damning tract against the many terrors of an increasingly machinistic and techno-logic world that threaten to disrupt such re-found harmony. “Awake young minister, there's a message to be delivered/Awake young passenger, awake your country,” presses 'Count Of Casualty', Wolf demanding we rip our safety nets out from their plug sockets and remember how to walk without cables. “DRII-II-IIVE!” snorts 'Battle', a swaggery rock riot – musically, it's the album's low point, but lyrically, it enunciates the record's entire manifesto: to step down from our screens and blink ourselves back to reality. The message is, consistently, to do something real, something tangible, something you can hold onto with two defiant fists, something burning with the shrill smacks and slaps of all hands on deck ('Oblivion').

Wolf's music has always held itself in reverence of a wild, untamed Mother Nature; and while The Bachelor is less organic and unfettered in its sonics than, say, the snap and crackle of Wind In The Wires, its message – to preserve all the things a broadband connection cannot provide for us – is clearer than ever. Love or hate him, it is difficult to begrudge this young man for continuously writing a much-needed hope and zest for renewal into the script of a world we're all too ready to damn as broken.