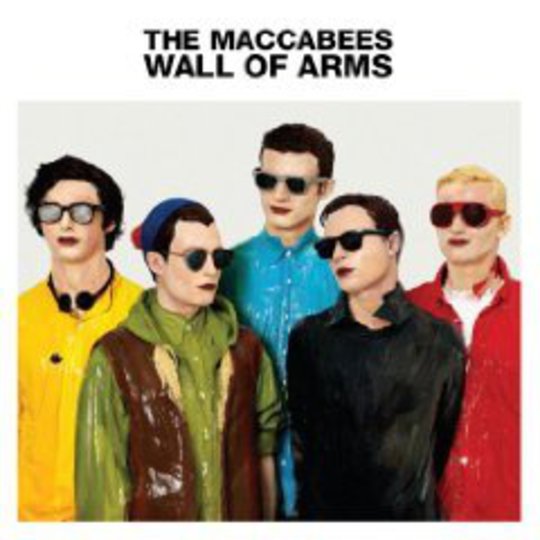 For the on the up British indie band, the most common method of embiggening one’s sound involves quite a lot of coke, a minimum of one orchestra, and probably some lyrical references to your new friend and equal God/Jesus/The Messiah (see The Verve, Oasis, Stone Roses et al). Typically the results are horrendous, and get described in such hateful clichés as ‘life affirming’ by awful idiots who need to subject themselves to all of ‘Champagne Supernova’ to confirm what Descartes pointed out rather more pithily back in 1644.

It’s nice to then note that self-consciously epic as it may be, The Maccabees’ Wall Of Arms is more in line with the nervy, nerdy yearning of Arcade Fire than the second album bloat that so often sets in; stately and majestic, but emphatically not arrogant or presumptuous. However...

Production duties are handled by Markus Dravs, whose CV tellingly includes engineering Arcade Fire’s Neon Bible. Now, bearing in mind The Maccabees’ debut Colour It In was quite Britpoppy, and was helmed by famous Britpop producer Stephen Street, you perhaps see where I’m going with this.

Opener ‘Love You Better’ sets the pace – a guitar line that billows and expands, giving way to pulsing keyboards and a slow build to brass-driven climax. Moreover, Orlando Weeks’s voice is blown up to MASSIVE proportions, more echo than the Grand Canyon, right at the front of the mix, grandiose universal sentiments about love bleeding from his every utterance. Compare and contrast to ‘Good Old Bill’, 'Love You Better's opposite number on Colour It In: the crescendo is altogether more indie disco, it features the phrase ”like it or lump it” and a lyrical reference to pork pies, and Weeks’ south London whine is heavily pronounced. He doesn’t not sound like himself on Wall Of Arms. It’s just that he doesn’t not sound like Win Butler, either.

Not that this is a terrible thing as such. ‘One Hand Holding’ lashes straight into a massive wall of wordless vocals that never quite let up, whipped into urgency by a liquid maelstrom of frantic keys and lithely surging guitar, Weeks repeatedly barking “why would you kill it before it died?” It sounds impressive, and is beautifully constructed, but there’s the nagging sense that it trips the Pavlovian response in those who enjoy the better music that it’s influenced by than by, rather than being singularly brilliant in its own right. Or to put it another way: it’s impressive and all, but it’s hard to pick out anything about it that sounds distinctively Maccabees.

Song after song breaks your heart with the care and feeling that’s been put in, but it's hard to be swept away - for all ‘Young Lions’ immaculate swell from delicate, reverby intimacy to huge, holler-along cascade or ‘Dinosaurs’ sobbingly pretty rise and fall, you can’t shake the feeling both probably ought to have come with the prefix ‘Neighbourhood’.

Wall Of Arms is emphatically not bad, it’s just that it frequently feels like The Maccabees are working in an idiom they’re in thrall to, rather than in control of. Weeks' climactic cry of “we will dance my love” on ‘Kiss And Resolve’ is so freakishly close in melody and sentiment to Win’s intonation “I hear you sing a golden hymn” on ‘Neighbourhood #1 (Tunnels)’ that it’s tough to hear more than homage.

Of course it’s more Arcade Fire-like than Arcade Fire clone, and you could comfortably sling in a little Echo & The Bunnymen, Head On The Door Cure and Wolf Parade by way of further comparison. Certainly there are times where influence is thoroughly transcended – the title track’s refrain "those who keep me company, they are a wall of arms around me" is possessed of a sweet humility that’s all their own, while 'No Kind Words' goes the opposite direction, its implacable forward momentum propelled by Weeks' black mutter of "if you got no kind words to say you should say nothing more at all", dispatched like a death threat.

Those moments are in the minority, though. Really, what you’re left with is an accomplished album, delivered with passion and feeling, that’s easy to acknowledge as pretty good – to admire, even – but hard to be seriously moved by. Still, I can’t quite bring myself to be too cynical; I don’t know if The Maccabees’ newfound sense of transatlanticism is necessarily laudable, but it’s certainly interesting in a mainstream Brit indie band – it confirms them as artists of breadth, if not quite as much depth.