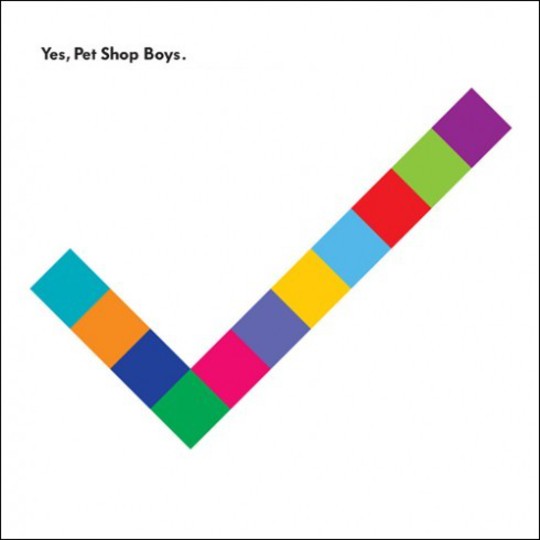 Neil Tennant and Chris Lowe's interest in pop stardom would seemed to have rather waned over the Noughties, a decade in which they've drifted away from the mainstream to potter around with guitar albums (Release), soundtracks (Battleship Potemkin) and politics (Fundamental).

This is perfectly reasonable: The Pet Shop Boys are very old. It befits them. Or it did until their performance at the The Brits, an almost obnoxiously tune-packed medley that so comprehensively pwned everything else on offer that you couldn’t help but get your hopes up for overtly pop tenth studio album Yes.

Probably you can blame Kylie - certainly the Pet Shop Boys do. The duo wrote some songs for their former collaborator, got blanked, huffily declared they’d never work with the aging pop princess again, and decided to write and record a bunch more Kylie-style tracks themselves and make her RUE THE DAY. Something like that, anyway. Whatever the case, you wouldn’t catch everyone’s favourite middle-aged hotpant aficionado singing ‘The Sodom And Gomorrah Show’, and that’s the thing – Kylie's best songs come from a knowing blankness of personality, while the Pet Shop Boys' come from a knowing assertion. Here, Tennant has done a virtual volte face from Fundamental, biting wit replaced for vague platitudes about love and fame, big, empty sentiments over big, empty tunes.

Ironically the singer is also the closest the same tracks come to having a saving grace - the only thing stopping the formulaic hi-NRG of ‘Did You See Me Coming?’ ("you don’t have to be in who’s who to know what’s what") and drippy ‘Vulnerable’ ("I am no-one’s stepping stone, but I couldn’t live life in private, alone") evaporating into clouds of their own banality is that strange, wry whine of his. Put an over-emoting talent show winner in his place, and you’d be in actual hell.

It's par for the course on an album where the overwhelming mass of tracks – perhaps seven out of 11 – are trite, gooey and laboured, hollow lyrics set to fruity gushes of soft-focus, over embellished synth layers. It may end up being a smash with the How Do You Solve A Problem Like Maria? crowd, but it ain't going to galvanise a new generation.

There’s are definitely exceptions. Though the sparse, New Orderish twinkle that opens Xenomania-produced single ‘Love, Etc’ makes you pine for more minimalist days, the sheer chutzpah of its lurch into swaggering terrace roar carries the day; ditto ‘All Over The World’, the one moment on Yes where banality is actually turned to advantage, the lusher-than-an-AA meeting chorus "this is a song about boys and girls, you hear it playing all over the world" both sending up and vindicating lyrically vague pop anthems. ‘Pandemonium’s tender analysis of the Dohery/Moss affair comes attached to the album's most appealing melody, while ‘Building A Wall’ is just awesome, an imagery-overloaded freakout of Cold War era nostalgia – "there’s nowhere to defect to anymore!" yelps Tennant, breaking out sounds like the world’s poshest Johnny Rotten impression.

It’s not enough to make Yes good, but it at least reassures you the Pet Shop Boys haven’t lost it as such, and only a crazy person would suggest Latitude is going to be anything less than incredible. It’s just a shame to have squandered the momentum of the Brits by turning in a weaker album than the lower key Fundamental; a good two decades after the event, the Pet Shop Boys have well and truly entered middle age.