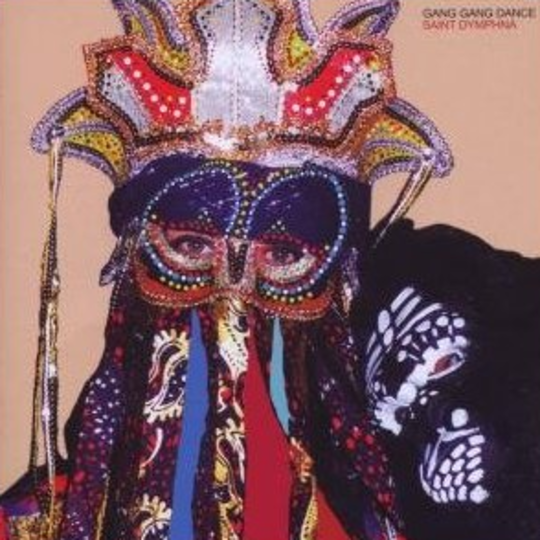 Gang Gang Dance have long flirted with ideas of populist structures and hip-hop rhythms but on their latest record - and the first distributed by Warp - they have successfully channelled those previous experiments with free-form percussion and texture into their most focussed, coherent record to date.

It's evident throughout - notably on tracks such as 'First Communion' and 'House Jam' - that the Brooklyn-based group have expanded their sonic palette since last proper full length God's Money, which seemed to sway uncomfortably with its sparse, unpredictable arrangements whereas Saint Dymphna offers genuine moments of hope and salvation amongst the unrest.

Elsewhere, detached MIDI programming and untreated synths bring to mind The Knife's stunning Silent Shout LP although, courtesy of some superbly busy drum work and effects-laden guitars, it still sounds only like Gang Gang Dance: ever different, always the same. Obligatory 2008 shoegaze comparisons can be drawn at points ('Vacuum' takes the woozy lead line from My Bloody Valentine's 'I Only Said', reverses and slows it down to a crawl replete with hissy, major key synth stabs), and hints of Battles (the nest of keyboards, treated guitars and crisp percussion on album opener 'Bebey').

Hiccup-y vocals hang back in the mix, all tongues and vowel sounds, fearlessly skipping octaves like Elizabeth Fraser of Cocteau Twins fame, occasionally shifting into focus to deliver phrases and statements before things become less lucid and clear again. Primal, a phrase often used to describe their previous albums, is still apt for this one, with vocals eschewing any concept of verse-chorus-verse and only being used, like any other instrument, as and when required. At times doe-eyed and eager, at others conversational and restrained, Liz Bougatsos possesses a remarkable range of expression, and the record seems a lot less otherworldly and strange with her as our guide.

Saint Dymphna is also the first album which makes overt the influence of grime and dubstep on the Gang Gang Dance sound. 'Princes' features Tinchy Stryder, and displays a mutual appreciation with the two-step beats and swift MC-ing complementing the swooping, ethereal vocals perfectly. It’s a refreshing change to the 'token guest rap star on a verse of white indie band' horrors that other supposedly forward-thinking artists have dreamt up in the past.

This, then, is the sound of a band who pool seemingly disparate influences into a unique sound of their own, a USP which in this day and age is often a cliché - and usually complete guff. Gang Gang Dance, however, have found their voice in a world of retro revivalists and fly-by-night trendhoppers. It’s whatever they want it to be, and it’s awesome.