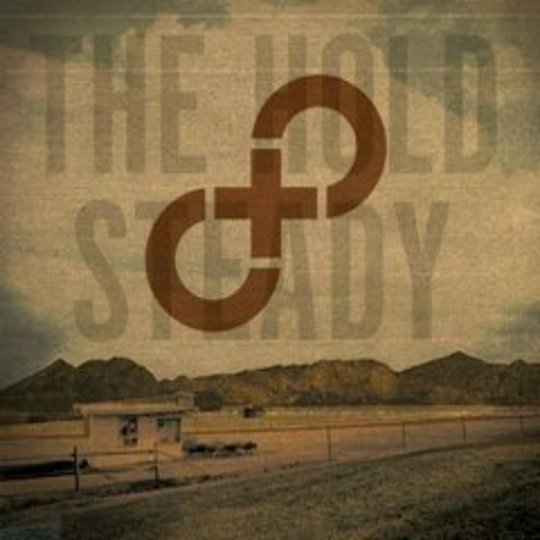 Every* Hold Steady *song is pretty much the same: a man caught the wrong side of 30 hollers “Remember that one crazy broad from last summer?” over the sound of a bar band trying to discover the mid-point between The Replacements and John Cougar Mellencamp. Someone gets drunk, someone else gets high, lather rinse repeat.

Every Hold Steady album is pretty much the same as well. It must be deliberate. I’m not talking about the constant callbacks to other albums (observant HS fans will notice the repeated use of the lines “There’s gonna come a time when she’s gonna have to go with whoever’s gonna get her the highest” and “When the chaperone crowned us the king and the queen” on here). No, I mean the way that they frontload the shit out of their LPs, so on first listen you assume that they’ve finally blew it and dropped off one-third of the way through.

Like on here, like on every other album they’ve ever released, the singles are early doors. So here, in the ‘Chips Ahoy!’ / ‘Cattle and the Creeping Things’ spots, you’ve got ‘Constructive Summer’ and ‘Sequestered In Memphis’. The former seems to be a deliberate nod to those who just go “Springsteen” _when they listen to HS and refuse to develop any further thoughts on the matter, a ‘Darkness On The Edge of Town’-esque driving anthem dedicated to the joys of getting fucked up in your youth: “Me and my friends are like / The drums on ‘Lust For Life’ / We pound it out on floor toms / Our psalms are sing-along songs”, complete with John Bender middle-eight denunciation of the “grey walls” of detention. The latter is classic HS, insistent bar rock with, yep, one of those damn crazy broads that keep making the band’s life such a misery (“In bar light she looked alright / In day light, she looked desperate”_).

The album is unlocked by the title track. The big line about this album is that it’s about Growing Up, as if the band were just providing the soundtrack to Boys Meets World _or something. It isn’t. It is an album about dealing with dealing with growing up. Follow? Look at it this way: for around a decade now, rap music has been desperately trying to work out what its 35-year-olds can do. They’ve had two options, either the “Get off my damn lawn” hectoring of Ice-T and KRS-One, or ‘Kingdom Come’’s unique branch of _“Exactly the same fucking songs as before, except now in a blazer” steez. Finn, word to Anthony Charles Lynton, has found a third way. He’s playing the role of scene elder who isn’t 100 per cent comfortable with what’s going on these days, but knows he’d be an utter fool to fight it. Yeah, the scene is “too druggy”, yeah the kids are “too skinny”, but there’s still anthems to drop and the album is about the joys you can find alongside the grind.

What else is there? ‘One For The Cutters’ drags a harpsichord into the mix to tell a tale of a girl so dangerous she even “parties with townies”, over what sounds a little like the music from a Edwardian dance party. ‘Joke About Jamaica’ takes a fantastic opening line (“They used to thing it was so cute when she said ‘Dire maker?’_ / All the boys knew it was a joke about Jamaica / She’d always find a ride back home from the bar”) and goes on to tell that depressing story of a groupie slowly losing her looks and her reason to live, a similar tale to album closer ‘Slapped Actress’, a retelling of the John Cassavetes movie _Opening Night, in which Gena Rowlands plays an actress who realises that with age comes ugliness.

And there is, yes, an argument to be made here that The Hold Steady are misogynistic, that the guys on this album find great wisdom with age while the chicks just get crow’s feet, but that’s too simplistic. The story of The Hold Steady has always been, from day dot, a celebration of actually getting up and getting angry and doing stuff, which is why on every single album the guys getting drunk are having a whale of a time and the dudes getting stoned are at rock bottom. Aggression versus acceptance.

It’s just a Hold Steady album at the end of it. They’ve never let us down so far, and they’re not liable to do it any time soon. They turn critics into gibbering wrecks unable to write proper reviews and leave us forced to just string together our favourite lyrics like a damn teenage girl scribbles Tokio Hotel choruses onto her bed headboard. But, y’know. Hairier.

So that’s Stay Positive then. An album that, like The Hold Steady themselves, is some straight-up grown man shit.