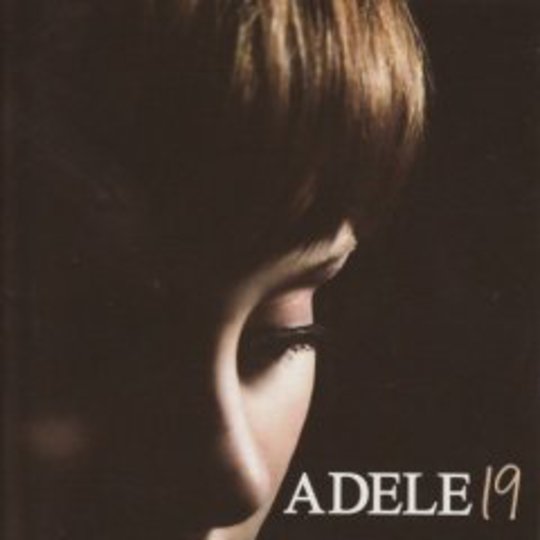 Straight up, that last single, the one about the pavements: belter. Bullshit, but belter. Stuck in the head for hours, days, weeks; spinning about, knocking everything else heard on the radio in the last few months clean out, splattered up the sides of lifts and the platforms of tube stations best never loitered in. See, your successful pop single needn’t be good, it just needs one almighty hook at its core to stick like dog-do to a box-fresh trainer. And ‘Chasing Pavements’… bloody hell. You could raise the Titanic with that monster given massive chain links enough.

Not that an almighty hook was necessary, entirely, to send the song towards the top of the charts; the staggering buzz about Adele (Laurie Blue Adkins... such a great name) as 2007 moved sluggishly into a new January – same grey skies, same dreams likely to be shattered but four months in – was fuel enough. It was a winner weeks before it slipped onto record store shelves, and likewise this, the hardly make-or-break debut. 19_ will be number one on Sunday. It will sell thousands each week from now until the summer, when a glut of surprise packages will spring forth from the festival season and briefly play kiss-chase with more boys and girls than they were previously accustomed to. Then, unless she’s on the Glastonbury bill (like she won’t be), there’ll be the slightest of slumps. Come November, the special edition: remixed tracks, fleshed-out takes on her stripped-back acoustic numbers, a cardboard sleeve. Money will be made, a second album is a certainty. A knocking here will not affect a thing, as the rails are too straight and the engine too heavy. Not that I’m saying here that _19’s due a dismantling of the most acerbic kind.

But, in all honesty, 19_ is not the maximum-rating masterpiece the predictable few have made it out to be; opening the _OMM this month to see such a review, well – you could have bet on five stars back in November and not seen a penny now, such were the odds stacked against a slating there. And it’s hard – really, really hard – to hear how anybody could consider this a flawless achievement. First out of the blocks is a syrupy love song, delivered warts and all by a young vocalist yet to fully grow into her pipes (potential, sure, but the girl’s occasional lapsing into a painfully forced wail leaves her some leagues beneath the often-compared Amy Winehouse), only an acoustic guitar to guide the barely sixth-form poetry to a close (a fair criticism, given our protagonist’s age). ‘Daydreamer’ is clumsy, a blindside in store for the great many in love with Adele’s brace of preceding singles – the first will come under the microscope in a few seconds; the second, well, it’s still echoing about your brain as you read… these… should I… words… give up?

No, of course not. There are great – okay, much better – moments to come, providing you can get past the way Adele drags the word “waiting” into a ridiculously manysyllabic monstrosity of the English tongue. ‘Best For Last’ isn’t one of them, but at least it speeds the pulse somewhat, a jaunty bassline provided by Adele herself bobbling playfully beneath those strong vocals, here restrained enough to let the singer find a natural comfort level. She overdoes the “Yeee-eeea-aaaah yeah yeeeeahs” rather, but the recording sounds as if she’s a smile plastered all over her face. ‘Cold Shoulder’ nicks a few tricks from Massive Attack’s ‘Unfinished Sympathy’ but doesn’t fully slip into irritating imitation thanks to brisk percussion and silky production from Mark Ronson. His touch works magic, transforming this sullen servant girl into a glamorous princess; it’s truly fairytale stuff when compared to the very next offering, ‘Crazy For You’, which switches to type – the same type that opened proceedings with such shoulder-shrugging indifference.

Adele’s best song yet, ‘Hometown Glory’, is 19_’s closing track. There must’ve been a temptation to place it towards the beginning, perhaps immediately before _‘Chasing Pavements’ (which lands at three of twelve), to pack the first half with hits for the regular punter with a short attention span and an itchy ‘skip’ finger. But the song’s natural home is here, at the end of all things. Anywhere else, it would have rendered everything after it irrelevant. That piano, still, pokes at the heart, daring it to burst; Adele’s speaking from her own bruised one here, her voice vibrant, cracking from word to word but affectingly so, unlike elsewhere when such exposing of her limitations merely rankles. The strings are subtle, not daring to intrude over the top of their master’s voice; this is something single number two failed to rein in, albeit possibly for the better commercially speaking. Then, silence. No fussy fanfare of an outro to see the album out, no final flourishes to have the listener stunned senseless. They’re not necessary. The past four minutes have done a perfect job of that already.

The preceding thirty-nine? A mixed bag, and no doubt. The co-writes – not as many as you might’ve expected – generally boom from the speakers. The self-penned efforts are bare-boned, erratically excellent but frustratingly blighted by Adele’s penchant for going beyond her capabilities as a vocalist. There are questions regarding authenticity, and what’s from the soul and what’s got all eyes on the wallet – she is BRIT trained, remember, and presumably perfectly capable of ‘playing’ Adele while the ‘real’ Adele Laurie Blue takes a back seat ride to a five-bedroom place in Hampstead. But questions only lead to further questions for the time being, so the best thing to do is either enjoy this for what it is – a debut album full of flaws, but bristling with possibilities; number two could be a stunner – or simply ignore it best you can. Turn a blind eye, a deaf ear.