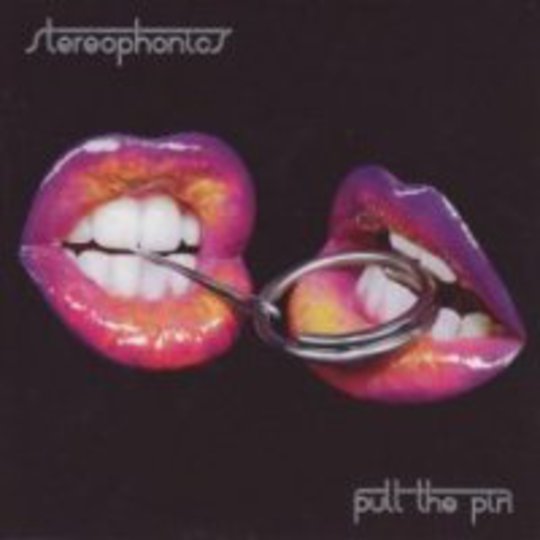 When you’re better recognised for getting bloodied up on London streets than for your song writing talents, it’s time to toss the towel in. Kelly Jones: we’ll tolerate this as a swansong, but dare to show your rock chops again after its promo cycle’s come to a muted climax, you’ll be suffering from more than a grazed elbow.

Of course, you haven’t clicked through to this page without expecting a relative mauling of Pull The Pin, and I’m pleased to report that your prediction is spot on the money: this, the Stereophonics’ sixth studio album – some achievement for a band so thin on ideas from the outset that children’s television-spawned novelty singles are over spilling with creativity by comparison – is so tried and tested of formula that the listener barely even registers the twelve songs hidden behind some of the worst artwork of the year. It’s bland, white-washed; it’s a million miles from the collection of angry, politicised songs its makers were talking up in pre-release interviews.

The music is forgivable, of course – we’ve happily let Foo Fighters go about their business without too many gripes for over a decade, and Stereophonics’ knack for a half-decently realised pop-rocker from time to time remains intact – but the vocals… still nobody has nudged Jones and offered him a little education in the best way to make an impression without sounding as if a diseased cat’s being garrotted in his throat. The lyrics, too, are entirely inane throughout, never more so than on lead download single ‘Bank Holiday Monday’, a song so without charm it almost has you craving a 3 Colours Red reformation.

‘Pass The Buck’ is a hella-catchy composition delivered early on – it’s sure to be a single at some stage – but four or five songs in the incredible lack of variation in the output of this Welsh (ish – 66 per cent) trio begins to grate in earnest. Stuck for inspiration? Turn everything down and go acoustic: ‘Bright Red Star’, the song in point, is an abomination of a Rod Stewart-tuned ballad with one of the least-sincere vocals in the history of modern rock.

The longest song – the epic of the piece – arrives last, of course: ‘Drowning’ finds our Kelly claiming he’s drowning (in the manner of a cat, drowning – most things this man has to say echo the tones of a distressed pet). A pulse drops away as the track fades – we can only hope it’s representative of this man’s desire for further infliction of pain upon a nation who got the fucking message back in 1997.

Absolutely without spark and wholly forgettable, Pull The Pin is, hopefully, the last hurrah from one of Britain’s most perennially over-rated excuses for a rock and roll band. The sooner these three men actually listen to their own music, the sooner we’ll bid them a warm farewell on their journey to doing something, anything, else. Kelly Jones, pub landlord. Has a certain ring to it, no?