In Our Bedroom After The War 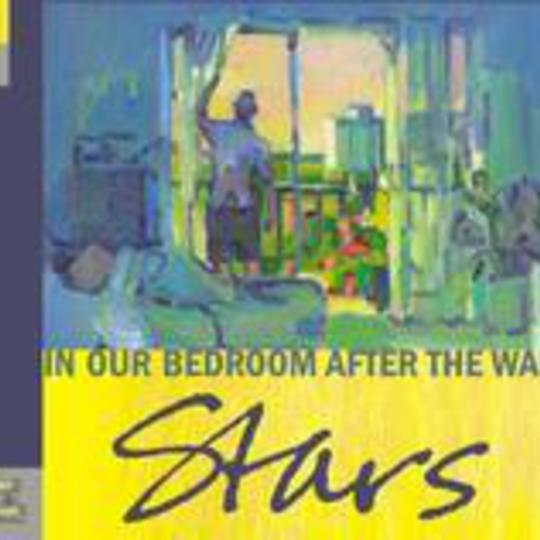 Stars** are a band who take pop music very seriously. Clearly believers that melody and poise can be as giddy an art form as any gallery showing or highbrow conceptual sculpture, In Our Bedroom After The War_ feels like the conclusion of a journey towards the summit of mount indie pleasance.

The climb begins well with the maudlin duet of ‘The Night Starts Here’, as co-vocalists Amy Milan and Torquill Campbell jostle for room, each imploring us that “The night starts here, forget your name, forget your fear”. She is coquettish, he more theatrical; the scene is nicely set. What follows though, is the album’s money shot: the soaring pure-pop of ‘Take Me To The Riots’ is a joyfully Lou-Reed-echoing summation of the exciting seediness of an anonymous night out in the big city. The immediate counterpoint is the gossamer balladry of ‘My Favourite Book_’, which is reminiscent of Emiliana Torrini at her most summery.

What follows is a almost-perfect lesson in how to make thoughtful, mid-tempo baroque-pop whilst sidestepping the danger of growing a flabby middle. It’s all seductive piano ballads and elegant non-coffee table ‘mood’. ‘Barricade’ is a lovely Rufus Wainwright-esque solo piano ballad with Torquill in fine voice; ‘Window Bird’ sounds like a White Album _outtake; and ‘Personal_’ is a lovely smoky torch song.

The final third of the LP carouses into view with the jet-propelled ‘Bitches in Toyko’, but the best is saved to nearly last with Torquill’s ‘Life 2: The Unhappy Ending_’, which seems to channel the spirits of Edith Piaf, Morrissey and The Divine Comedy all at once.

Given the added aesthetic lustre ladled onto In Our Bedroom After The War, it’s paradoxical that they’ve been shunned by some for allegedly losing a certain musical lustre. It’s those disenchanted fans’ loss though; as Stars have produced the most well-rounded and broadly horizoned record of their career.