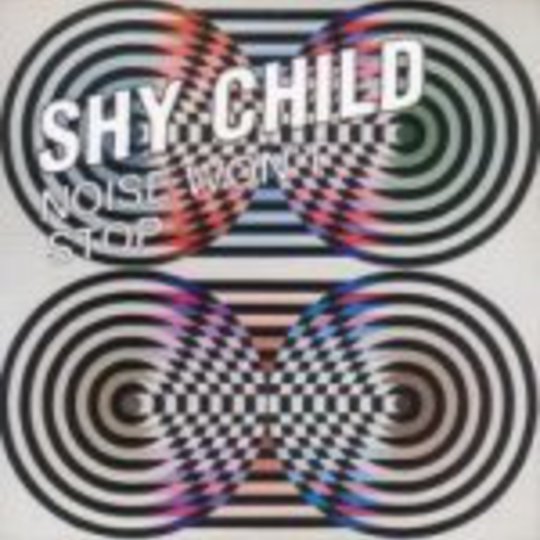 Shy Child obviously aren’t afraid of irony. By entitling their third full LP Noise Won’t Stop, the Brooklyn duo have knowingly set themselves up for a fall. To pun-starved hacks it’s the musical equivalent of walking into a tracksuit-clad crew of delinquents wearing a floral dress and suggesting the bulky guy at the back’s cap is a little effeminate. Or, to put it bluntly: this record is due one monstrous kicking.

Yet the anticipated beating never comes. Instead, Noise Won't Stop simply looks you straight in the eyes before puffing out a double-barrelled chest, flexing its throbbing muscles and screaming at the top of its lungs: “FUCK YOU!”

Pummelling straight into frantic electro-clash opener ‘Drop The Phone’, the seething velocity is as abrasive and chaotic as Primal Scream’s XTRMNTR. Crass, bolshy beats screwdrive through your eardrums and gnarl away at your insides until every nerve-end trembles to its psychotic jazz-funk incessancy. This seething vitriolic storm barely passes before the tumultuous air-raid of ‘Pressure To Come’ explodes into a barrage of twisted sirens and juddering synths that screeches like a rabies infected Daft Punk frothing all over Shout Out Out Out Out.

Noise Won't Stop isn’t just a relentless tidal wave of sonic floor-shredders, though – Shy Child display an intriguing penchant for experimentation. It doesn’t always succeed, as ‘Summer’’s disastrously limp acidic balladry proves, but when it clicks Noise Wont Stop creates more friction than a night on the tiles with your embittered ex. The title track’s tribal rhythm is a frantic, lust-driven slice of hip-hop-fuelled shuffling that blasts through the airwaves like a Timbaland-shaped battering ram, whilst the slithering keys of ‘Kick Drum’ gyrate so wantonly against Pete Cafarella’s Prince-on-pills shrill you can almost feel the clammy flesh nuzzling seductively against you.

But, like many of their shape-shifting luminaries, Shy Child are partial to momentary lapses in concentration, with ‘What’s It Feel Like’’s lifeless Balearic Isle ambience sitting unsteadily amongst the album’s tumultuous backdrop. But the drab atmospherics are washed away as ‘Cause and Effect’’s glow-stick swinging, disco-punk finale has you writhing furiously to its hip-shaking euphoria, leaving you wishing it could be prolonged for just one minute more.

And that’s the irony, y’see: the noise did stop. But, by god, you wish it hadn’t.