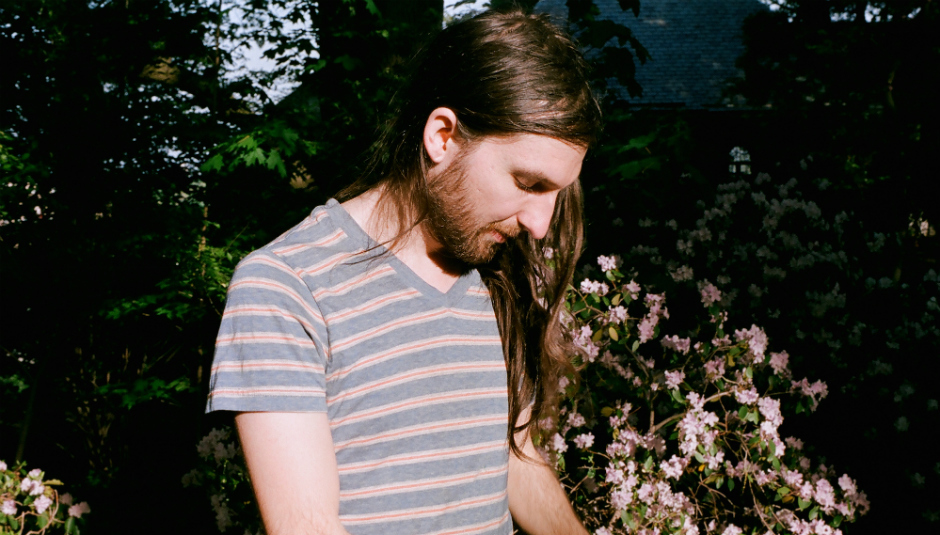 Jordan Lee’s music has always had a power that belies its gentle nature. His previous album as Mutual Benefit, Skip A Sinking Stone, married his trademark wide-eyed melodies with hints of a darker underbelly. His latest, Thunder Follows The Light, fully confronts that darkness, while also retaining some of the awe at nature that permeated his early work. Thunder Follows The Light also brings Lee’s political side to the fore and arrives at a time of unprecedented global change – where our climate increasingly seems to echo the extreme and unpredictable rhetoric espoused by our politicians.

That atmosphere has felt particularly febrile in New York, where a brutal heatwave settled over the city for much of the summer. And when it ended earlier in the week (“I’ve finally taken the air-conditioner out of the window”), it seemed like the perfect herald for a new record, especially for an artist so fascinated by the weather. So what’s the long-range forecast? We spoke to Jordan about matters both meteorological and philosophical.

DiS: Let’s jump straight in with the title of the new record, Thunder Follows The Light. I guess we’re not exclusively talking about weather here, right?

Jordan Lee: [laughs] Yeah, definitely. I try to come up with provocative titles that can be open-ended on what they mean. I was drawn to the phrase pretty early on, and it started to mean different things throughout the writing process. So at one point, I was thinking about how lightning can light up the whole sky for one moment – a lot of people think of thunderstorms as unpleasant things, but when that flash of light happens, for one second you can see the whole landscape around you.

The big moment of realisation came when I started paying attention to lightning and thunder happening at different times – getting the sense that so many things have been set into motion with climate change, and political things – that we’re living in this era of inevitability. I think that’s what’s making everyone feel so strange right now.

That idea of one thing naturally, and inevitably, following another is really interesting. Do you think we’re living in the gap between those events, that the ‘thunder’ is still to come?

That’s how it feels to me – and it’s kind of a terrible way to think because it doesn’t give us any agency as humans. I try not to think about it too hard because there are so many things as humans that we are in control of – me personally, as well as humankind. But that feeling of hopelessness is something that a lot of people are dealing with.

I guess one way of looking at it is: everything that’s happening at the moment is really awful, but perhaps there’s some comfort to be taken from a potential change?

A lot of the sounds you create are dream-like, relaxing, comforting – but are you trying to achieve more than simply comforting the listener with your work? I think there’s a distinction to be made between ‘comfort’ and ‘shelter’ in this case, isn’t there, particularly given the weather theme?

That’s an interesting question, and there’s definitely a distinction to make between those two things. My pet peeve is when someone just says “everything’s going to be alright” in a delusional type of way…

I think a lot of people are doing that at the moment!

JL: [laughs] there’s a lot of power in fully acknowledging bad situations – then trying to figure out a way to be hopeful or positive in a way that’s realistic. I consider myself a pretty optimistic person, but I still want to look for knowledge and have that optimism rooted in reality. When I was working on this album, I was working on songs that gave a hopeful message within the storm.

It can be dangerous, too – comfort encourages complacency, which of course links back to the political situations we find ourselves in now.

You’re right – the best song to talk about in this context is ‘Storm Cellar Heart’. I’d been living in weird places for a long time, and I finally got an apartment that didn’t have anything wrong with it, with good roommates… right as so much political turmoil was happening in both of our countries. So I felt a little guilty for how nice it felt there! The song ends with the line “Is it storms that help make the heart grow?” I was thinking, how long do I hide out before I start challenging myself again?

This is your third full-length record – are you beginning to refine your studio processes a bit, or do you prefer to make a completely new start each time?

It’s a completely new start – I need to have a spark of inspiration. But there are things I’m learning about myself, and things that come to me a lot faster now – even just technical details. I record the albums myself, so learning which microphones sound good on which thing… it’s nice to not have to guess so much! With Skip a Sinking Stone, I remember starting with sounds and trying to sculpt things from there – but it was really maddening and time-consuming. With this one, I started out with songs I could just play on a piano or a guitar, and then fill it with these bells and synthesisers after the fact.

So within each album, is the theme the origin point of the music, or do you have existing material that you’re then able to shape around that theme?

For me, the first thing has to be the theme. Usually it’s a broad idea, and it can shift and mutate, but I work on a really conceptual basis – otherwise, I get in a little over my head. I could just pick up a guitar and play anything in the world! Before I even play a note, there needs to be a purpose.

I wanted to ask about the song ‘New History’, which is about expanding our idea of history beyond what we’re taught. Do you think there’s a place for music in that way of thinking? Absolutely. I think there’s space within every profession, but especially musicians – they have so many different roles, but one of those is as storytellers; knowing your history is so important. I didn’t go to university and didn’t care about high school too much, so I try to research things that are interesting to me. The big political shifts that are happening in the United States, this heated rhetoric, where it’s like: “Facts don’t exist anymore!” That idea really disturbs me. So anytime something was being debated, I would try to research the hidden history of it. In the past, I enjoyed reading poetry and stuff like that, but lately, I’ve been trying to find a thick book written by someone who’s approved, with footnotes, talking about a subject in depth.

‘Depth’ is absolutely the right word here – I feel like on both sides of the Atlantic our politics are operating on such a shallow level. It’s important to remember, especially now, that there are other ways of thinking which are more nuanced.

There’s a really good example of that: in New York City, there was a budget crisis in the ‘70s, and the banks tried to privatise everything and break up the unions, it was a really heavy time. But the city was able to come up with a plan and not get totally changed. Someone wrote a book about it and compared it to what’s happening in other cities right now – it’s a story that says, “This is what happened before, and this is how people fought to keep their rights”. It’s really powerful to have some context for what’s happening now; it’s almost like you can see the future. With the news cycle that’s happening here, I wonder, why aren’t we hearing from people who understand what’s happening, rather than all this speculation?

I love that album.

It’s political without being obviously so; it seems to actually capture the sound of disintegration in society.

I was really impressed with how they pulled that off – and I’ve not had a chance to read the lyrics much – but you’re right, the sonic landscape on that record is so overwhelming.

So do you think there’s a space for music that doesn’t necessarily have a lyrically political message, but still communicates something that places it in that bracket?

That’s almost the dream – there are some people who are able to pull off overtly political music really well, but I think for the majority of us it sounds pretty cheesy – especially if you say something exactly specific to the time. Instead of feeling topical, or powerful, it takes all the power away from it. Right as the presidential elections happened here, a lot of bands felt the need to say their politics or change their songwriting… because there’s this other weird phenomenon where if you don’t use your Twitter to speak up, someone will say: “It’s evil to be apolitical right now”. My friends and I struggle with that a lot – like, if we retweet this one thing, does that mean we’re good people now?

Exactly – you’ve done you politics for the day…

But another thing I think about a lot is, the other way to be political as a musician is thinking about your business practices, and who you choose to work with – how you set up your band, making sure you’re not taking advantage of anyone. I guess that’s a lot more behind the scenes – but Brooklyn feels like a small town, and you can pretty quickly get a sense of who’s trying to build community, and who’s trying to rocket their way to the top.

Thunder Follows The Light is out now via Transgressive. For more information about Mutual Benefit, including forthcoming tour dates, please visit his official website.