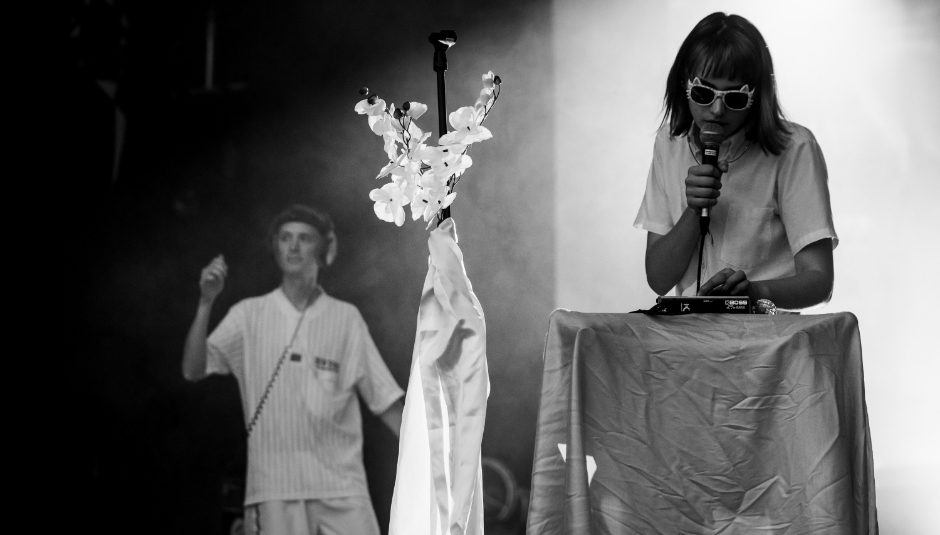 For a country with such rich musical history, Poland is overdue a major international breakout act. The 21st century has seen artists such as Behemoth, Jacaszek, and The Car Is on Fire gain a level of underground following, but perhaps now is the time for someone to make a bigger splash. Enter Coals, the dark wave duo from Silesia that have already played buzz-inducing shows at festivals across Europe and North America.

Formed in 2014 by Kasia Kowalczyk and Lukasz Rozmyslowski, their debut album Tamagotchi arrived in 2017 via AdP Records. It is from afar a collection of accessible dream pop concoctions that would fit easily into the dominant alternative culture, but on closer inspection, there is something more sinister at play. Rozmyslowski’s production is far from clean, dabbling as it does with feedback and the disruptive effect of incorporating elements of noise into a prettily arranged tune.

On the day that they played a rousing set at OFF Festival in their hometown, we spoke to them about where their name comes from, how they categorise themselves, and how they overcame a crippling phobia of speaking on the phone to become confident performers on stage.

DiS: Does this feel like a hometown festival for you?

Lukasz Rozmyslowski: Yeah, because this is the capital city of the region, Silesia. But we are not actually from Katowice, I’m from a place close to Tychy, which is well known for Tyskie beer.

Kasia Kowalczyk: And I’m from Gliwice, which is really close to Katowice. I’ve got a grandmother here, so I feel very connected to this city.

[As we begin to ask the next question, Kasia’s phone goes off…]

KK: I am afraid of talking on the telephone. It’s my phobia.

Really? For your whole life?

LR: I hate phone calls, also. My heart rate goes up high when the phone rings.

KK: I was really shy for my whole life, now not so much. Maybe I’m accustomed to it now. I much prefer to write messages to people.

I would have thought for you to have that phobia, then to sing on stage would be the most difficult thing of all.

LR: It used to be. For me too, when I was a young man, I was very afraid of the stage. When we had to go on stage and talk into the microphone, I was always so afraid.

KK: Yeah, me too. I really didn’t like doing shows for the first two years. But now I treat it like the theatre and I have become an older person on stage. I’m really excited about it now, it’s my life. But the early shows, the debut steps, were really stressful for us.

LR: I used to have to pee five times in the last hour before every concert.

You definitely can’t tell when you’re on stage now.

It’s interesting that your whole stage setup is white, and yet most people would probably more associate your music with the darkness. And you’re called Coals.

KK: It’s not our ideology, though.

LR: We used to only wear black, but don’t stick to one thing anymore. For the next show we might feel differently and everything will look different.

KK: And maybe next year we’ll only play black metal!

I went to the Guido Mine today in Katowice. This is a famous historical coal mining area. I assume that’s where the name comes from?

LR: Yes. My two grandfathers and my father were coal miners. But I’ve never been to the mine!

KK: My grandfather too! I really like the industrial atmosphere in the mining area, I would love to live there, but my boyfriend says that it’s a really dangerous region, so we live in Krakow.

LR: Yeah. We first saw each other at a film school in Katowice. I had finished high school and we were going to university. This was four years ago.

Most bands don’t feel that their music belongs in any category. Is there a description of Coals that you’ve read that you agree with?

LR* One of our friends, who is also the booker at OFF, described us as ‘shy rap’. Kasia used to be very shy on the stage.

LR: He also wrote that we have elfic vocals and dirty beats, which I really liked.

KK: Some people call us typical indie pop, like Daughter, Florence + the Machine or The xx, and later they are surprised when they see our concerts. Sometimes people compare me to Dolores from The Cranberries too.

LR: These are very straight connections.

KK: These are bands that were high school fascinations for us, it’s the past for me. But they’re still nice comparisons.

LR: When we started, it used to be nice that they would compare us to bands that we like, but now…

Do you think that people aren’t giving you enough credit?

KK: Yesterday I met a guy that has a tattoo of the title of our song ‘VHS Nightmare’ on his chest.

LR: Someone in Lithuania also has a tattoo of us standing next to a car. Crazy cool.

The album came out last October. Where are we at with thinking about a second album?

KK: Maybe next year. Because of all the shows we’ve been playing, we’ve delayed the creative process. But I’m really excited about the future.

LR: The pressure now is quite high, because the last album was well acclaimed. We had a lot of good reviews of it – on the site Rate Your Music, they classified us as chillwave and we’re in 12th position of all time for that genre. We are above Toro Y Moi and it’s crazy, because I like his album.

KK: The next album has to be even higher!

LR: Maybe we need to change the genre.

KK: We’re finished with our tour for the moment and we will have more time to think about the next album.

LR: Plenty of times, we’ve had plans to write some stuff together, and then our manager has told us that we have two more shows to play this week, so hopefully there will be some clear time in the future.

Do you have some songs written already?

KK: You don’t remember that one? That was one of the ones we did.

LR: I don’t even remember them all, I’ve made so many recordings.

KK: So we can’t really talk about it yet, it’s too early.

LR: The guys from the management will put the pressure on soon though. Last time it all went well. We did it all with a DIY vibe, so people can feel connected and so that it’s authentic. That goes for the stage show too.

Tamagotchi is out now via AdP Records. For more information about Coals, please visit their Facebook page.