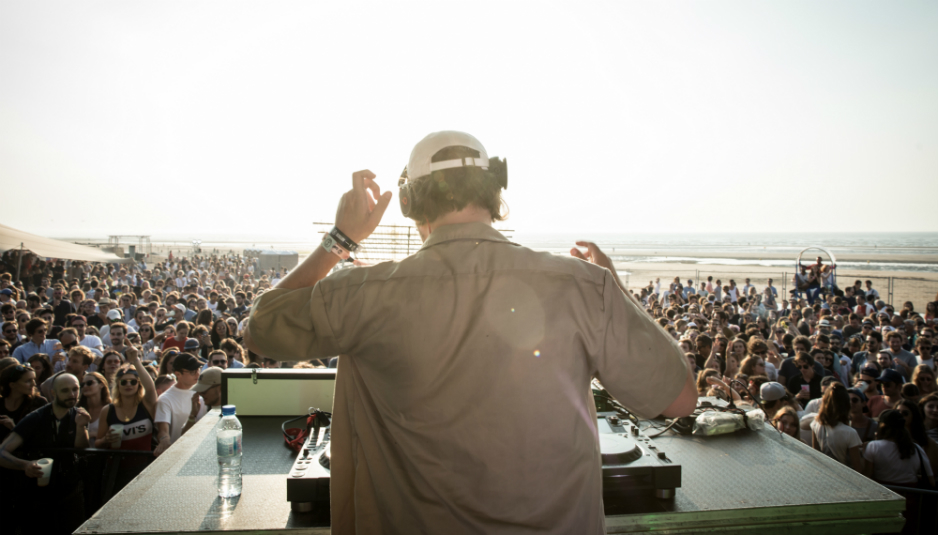 I started reading Anthony Bourdain’s memoir, Kitchen Confidential, on the ferry to Cabourg, Mon Amour. By chance, he detailed a childhood trip to Cabourg in the 1960s. It didn’t bode well, as the sadly deceased Hunter S. Thompson of the kitchen described the town as “a bleak, chilly resort area in Normandy, on the English Channel. The sky was almost always cloudy; the water was inhospitably cold.”

Fortunately, Cabourg in 2018 is vastly different from that of Bourdain’s reminisce. Firstly, the sun shone the whole time we were there and the water was temperate for anyone used to the English Channel. And secondly, this little Calvados town, just 115 miles from Portsmouth as the mouette flies, is now one of France’s chicer seaside resorts and a haven for Parisian weekenders. The whole town is decked out in grand le belle époque architecture which gives it a gothic Disney vibe and – this honestly isn’t lazy reporting – the main drag had these crepe stalls that made the whole place smell like pancakes day and night. It was incredible.

The festival itself is unusual in that – other than the Scene de la Dune stage – it takes place on the actual beach. This meant we felt the sand underneath our soles whilst dancing to a set from HAAi (pronounced “hi”) that pulled from techno to calypso rhythms via an ecstatically received ‘Blue Monday’. Australian-born HAAi is the resident DJ of Brixton club Phonox and, despite being a man who traditionally gets bored during any DJ set that doesn’t involve Toto’s ’Africa’, I couldn’t rest my feet. A florid sun started to descend towards the end of her set and, with that pinky orange glow illuminating the distended tide of Normandy’s infamously vast beaches, it was one of those festival views you’ll just never get at Reading.

The line-up draws mostly on European artists and, before setting foot on that toe-warming sand, I’ll confess to not being familiar with anyone on the line-up other than Brighton’s Dream Wife (who, tragically, I had to leave before seeing). But the sounds were skewed towards party-sparking electro, disco, pop, and summery hip-hop.

Before HAAi we caught a rap two-piece called Cabellero et Jean Jass, who were firmly in the latter genre though were harder onstage than their louche, laidback flow suggests on record. The main stage was open to the elements but, were it to have a roof, it would have been booted off by the bass of the soundsystem which was seriously meaty considering flats were just over the promenade.

Another treat was L’imperiatrice, a frankly unfairly unattractive six-piece who are flying the good flag of French disco. There are some deep licks for all those who prefer Random Access Memories-era Daft Punk and it’s kind of feel-good music that probably won’t win them any praise in the end-of-year lists, but if you’re at an actual beach festival in actual France you’d have to be a curmudgeon of the deepest and most stubborn degree not to flash some teeth during ‘Agitations Tropicale’.

The festival itself is focused on music with none of the experiential peripherals that – for better or worse, depending on your penchant for participatory theatre – are a part of so many modern festivals. It has two stages that take it in turn to stage sets for a crowd that could have been bussed in straight from Paris’ trendy Le Marais, with all the vintage football shirts, white knee socks, and John Lennon sunglasses demonstrating that 2018 summer hipster style is truly mode sans frontiers. Honestly, you could have been in London’s Peckham, Barcelona’s Raval or Amsterdam’s De Pijp, though the behaviour at Cabourg, Mon Amour was probably more restrained than either of those infamously wobbly European hipster districts.

Our favourite act of the weekend was Angele, a weeny pop chanteuse who – in true pop 2018 style – hovered somewhere in the sweet spot between Dua Lipa and Lorde. Whether she was bounding around the stage or rooted to her piano stool, her sweet lamentations singled her out as a foreign pop star to challenge the titans currently topping the world’s biggest festival bills. I watched a young lad with purple hair twirling around us in raptures throughout her set; he shouted every word, punched the sky and seemed transported to a higher state of happiness.

It wasn’t that unusual a sight for the weekend, with a crowd that had come watch music and party gracefully in a setting for which idyllic seems too straightforward a word. Safe to say, Cabourg’s bleak and chilly days are firmly in the past.

Cabourg, Mon Amour takes place in Normandy, France. For more information about the 2019 edition, including dates and tickets, please visit their official website.