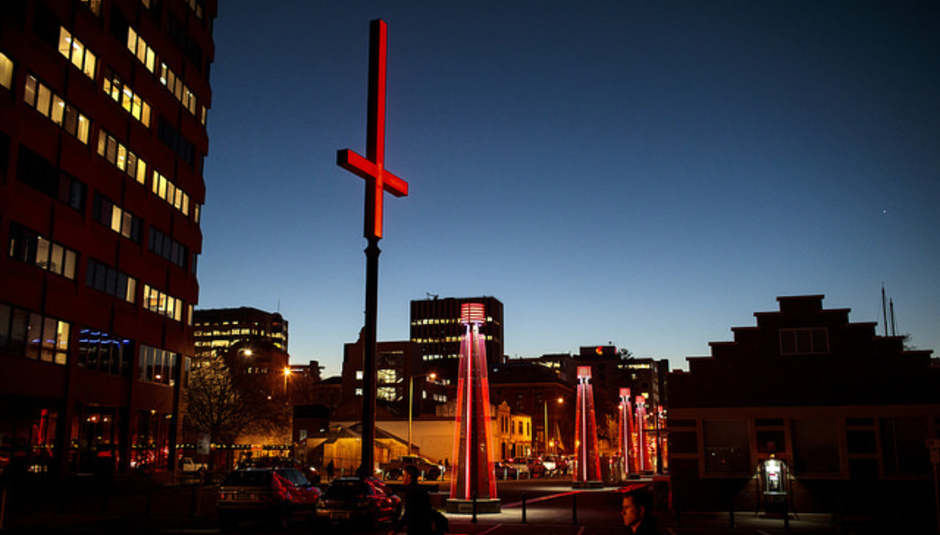 The first thing a visitor sees on hitting the tarmac after the plane touches down at Hobart Airport is one of apparently thousands of neon signs, beckoning you toward the dark side. It creates a sense of anticipation, and immediately makes you aware of the extent to which Dark Mofo festival keeps the city - and visiting tourists - in its thrall.

During the festival, this red glowing motif is found all around Hobart, Australia’s remote southernmost island city. There are moments in which the festival’s hold starts to take on cultish proportions, taking over most of the public spaces of Hobart, turning them into venues, art spaces, dance floors. It starts in typical ways, as art films screened in old churches or community halls, like Angelica Mesiti’s silent looped film ‘Rapture’ in the so-called Black Temple Gallery or the Detached Gallery near the wharf playing Jeremy Shaw’s ‘Liminals’, a black-and-white-film of a kind of art collective of young people swanning around expressing themselves noisily in formation movements. Over in the Domain House, a permanent installation of Lou Reed’s guitars and amps called ‘Drones’ is fairly self-explanatory, visitors invited to play with the intense beam of vibratory feedback by coming and going from the space as they please.

The party night ‘Night Mass’ was an even more extreme manifestation of this appropriation of space. Right in the centre of the CBD of Hobart, an entire street was blocked off and multiple venues, building sites and alley ways transformed into bonfires, bars and dance floors, a complex catacomb of different spaces decorated with open fires and broken glass as people partied on scaffolding covering building sites, or found their way upstairs to plush themed bars. The chaos seemed part of the effect, but even though good bands and DJs apparently played, it was almost impossible to have any idea what was going on. Performances by hard techno producer Vril, Indigenous hip hop artist Baker Boy, and dark ambient producers Demidike Stare, whose music has the hypnotic effect of a freight train crossing over tracks at night, where all received with excitement but hard to find, like exotic birds in a overpopulated parkland.

The lazier and more confused inevitably found themselves stepping over scaffolding outside, drinking a beer around a bonfire. For anyone from mainland Australia this already feels like crossing to the dark side, where the many rules that have resulted from higher levels of overall development and gentrification make even entering some of these venues feel like a transgression. These rules which make any kind of public activity so difficult on mainland Australia seem to have skipped Hobart, perhaps because in the past everything has. But a lack of economic development appears to be the enabling condition of this kind of debauchery, as the locals appreciate the tourist dollars and the entertainment, and the outsiders keen coming, consistently attracted by one of the most interesting festivals in the country, pulling unique talent which rarely visit Australia and even encouraging them to try new work.

Surrounded by his companion stuffed animals, wearing as many colours as he can put together, Charlemagne Palestine played a long set in E on piano and the resident organ at Hobart Town Hall, much in the spirit of Dark Mofo, turning everything into a kind of gleeful game.

At Mac2 a large wharf space on the harbour foreshore the curated evening ‘Borderlands’ featured a lineup featuring pioneering artists like Pan Daijing, William Basinski, Roly Porter and MFO and Merzbow. LA based avant-garde composer Basinski played rumbling drone with sweet melodies which pierced straight through at contrasting frequencies, long and sustained, changing only incrementally, producing the impression of travel through a vast landscape.

Basinski also leant his hand to an orchestral performance of his Disintegration Loops, performed by the Tasmanian Symphony Orchestra and arranged by Maxim Moston. The TSO’s orchestral arrangement of this ambient masterpiece, essentially the repetitious fading sound of decomposing tape, created a feeling of renewal and disquiet.

Tanya Tagaq’s ‘Retribution’ used the audience’s biased ideas of what is considered unusual to provoke the audience. Her urgent inuit throat singing with string and drum accompaniment started with spoken word, with emphasis on the final consonant and her ssess, indulging in the words, “squander”, “suck”, “sweet”.

Back at Borderlands, where Basinski asked us to sit down, Pan Daiing said we should stand up. After the somnambulance of the previous night’s acts it seemed a vigorous change, quickly enabled by layers of blistering noise curled up into tiny rhythms, unwinding and folding in formations that were both even and disruptive. Her music was totally absorbing but with moments of respite, such as while her operatic singing voice sought to overcome the dark pall she had cast us all in.

Her set was followed later that night by noise pioneer Merzbow, whose kind of sandpapering back and forth effect set at multiple frequencies, in different layers, music so totalising that it pushes you back into the black hole which Basinski pushed you out of.

Hobart is probably the only place in Australia where a festival like Dark Mofo could launch and succeed. It depends on the vision and patronage of the rich eccentric David Walsh, who like the stubborn child of a wealthy baron has returned from his world travels with a taste for art and debauchery, building an extravagant art gallery and staging events which embarrass his parents. Maybe that’s the cause of the open argument between him and the Lord Mayor of Hobart over the curatorial content. During the festival the mayor responded to complaints about the inverted crosses on the waterfront by threatening to cut off funding and disinherit the entire event for generating an 'unhealthy culture'. Walsh apparently responded as any wayward rebel child, telling him to shove his money because the festival would become boring if government had any input.

He’ll get away with it too. In a way Walsh’s success comes from the fact that he is Hobart’s only developer. Without competition he has free reign to transform some spaces into bizarre and exclusive luxury enclaves, and to leave others caked in rubble. Hobart is a beautiful city which appears to respond well to this contradiction, but I wonder if giving Walsh endless power and dominion might be a little dangerous? Not because it results in inverted crosses on the harbour and a city soaked in red neon, but because there is no one to stand up to him? Dark Mofo is definitely one of Australia’s interesting and generative festivals, one which has transformed Hobart from a conservative remote town into an attractive destination for international artists and a decent home for local talent. But that said, if every cult needs a leader, it must also survive their inevitable demise.