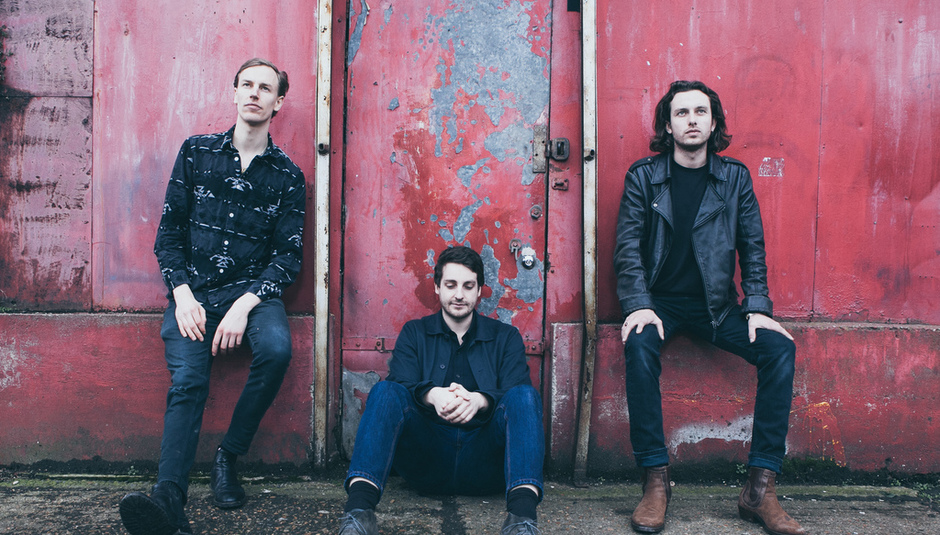 "Now is the time for a change": DiS Meets Desert Mountain Tribe

The last eighteen months have been something of a mixed bag for London based three-piece Desert Mountain Tribe. Having put out their first album Either That Or The Moon to a wealth of critical acclaim back in the spring of 2016, the ensuing period hasn't all been plain sailing.

Original drummer Felix Jahn left the band shortly after recordings had finished for their eagerly anticipated second record, then a combination of delays with the mixing and vinyl distribution forced the album to be put back nearly six months later than the band had originally intended it to come out.

Finally released at the start of June, Om Parvat Mystery represents a marked departure from its predecessor, the band taking a more experimental approach that's divided both fans and critics. However, having listened to the album on repeat for a good few months, it's fair to say we're definitely in the "affirmative" camp culminating in a Drowned In Sound affiliated show in Nottingham in September.

In the meantime, they're currently playing a run of Rough Trade in stores around the country which is where DiS caught up with them.

DiS: You’re playing a bunch of Rough Trade in-store shows to promote your new album Om Parvat Mystery. How have they been so far?

Philipp Jahn: Tonight’s only the second one, but last night in Bristol was great considering the weather being so hot and World Cup football on television.

What’s the reception been like towards the new record so far?

PJ: It’s been very mixed. Some people really like it and some people don’t. I think some people were expecting us to make a heavier, louder record than the first one. I don’t know. I wouldn’t say they didn’t get it, they just didn’t like it. Those that did like it have been really positive about what we tried to do. Personally, I’m very satisfied with how the album turned out.

The last time I remember you saying your intentions with this record were to remove the psych-rock tag many people automatically associated with the band.

Jonty Balls: I don’t even think it was that. That wasn’t really an issue. We set ourselves a target to write nine songs in a month and that’s exactly what we did. There was no plan to get away from anything. If it came out trippy as fuck it would have been recorded trippy as fuck.

PJ: We’ve always experimented with how we write songs and I think that side came out a lot more on this record. Nothing was ever set in stone. There was no pressure on us when we went in the studio.

JB: Take ‘High Drive’ for example. That song was written when I came home from the pub at eleven o’clock one night so I recorded it on my iPhone. The structure remains the same as it is on the record. Some stuff worked and some stuff didn’t.

The album was recorded last summer and mixing completed before the end of 2017. Was it your intention to release the record earlier than it eventually came out? If so, what caused the delay?

JB: Yeah, we’d have liked it to have come out before now.

PJ: I don’t know whose fault it was. It took us a long time to get the mixing done. Then we had to wait ages for the vinyls to be pressed, which was ridiculous.

JB: Before the summer would have been great, but then I don’t really think it matters what time of year you release an album as long as you’re happy with how it sounds.

I guess from an industry perspective it can have a bearing on things like radio play and festival bookings.

JB: I totally get that but we’ve never thought about those kinds of things when we’re writing or recording.

All of the songs were initially recorded with your previous drummer Felix Jahn, who left the band shortly after. Were any of re-recorded with the new drummer Frank Van Der Ploeg after he joined in August?

JB: One song, ‘World’. We were putting overdubs on some of the songs and ‘World’ was one which just didn’t sound right. It had the potential to be our big, skyscraping Verve moment but something about it didn’t feel right. Then we listened to the latest Noel Gallagher record and got a few ideas off that, so we started looping reversed guitar instead of the main riff which went on for about three-and-a-half minutes and eventually built up from there. It sounded great so we carried on with it.

PJ: It went on for about ten minutes initially, so we ended up having to cut it back again for the album.

JB: The original drum beat didn’t work on that version, so we asked Frank to jam along with it for ten minutes and see what happens

Would the original version made it onto the album had Frank not come along at that time?

JB: I don’t think it would have. We were really struggling with the original. Technically the song was there but it was boring as fuck! I really love cliche anthems like ‘Bittersweet Symphony’ and I honestly think ‘World’ could have turned out something like that, which is absolutely great. It’s one of my favourite songs, but once Frank became involved and we started mixing the album it took on a whole new meaning.

PJ: If Frank hadn’t got involved I don’t think it would be on the album. We ended up having another mixing session and that’s how this version came about.

Frank, how did you become involved with the band?

Frank Van Der Ploeg: I met Philipp first through an audition we did for a band. We didn't know each other but had mutual friends. The guitarist was leaving the band I was in at the time so Philipp came along for a jam.

PJ: This was about five years ago.

FVDP: It was a long time ago. I was working at the Amersham Arms at the time and Philipp came into the bar with Felix, their old drummer. Possibly Jonty as well?

JB: I remember being in the smoking area that night because I walked up with Felix.

FVDP: So I got to know them including Felix, then got a message saying he was going to quit and asking if I knew of any other drummers or whether I was free. I'd quit my band literally the week before so I agreed to join them.

Your first show was at Manchester Psychfest in September. Was it quite daunting making your debut with the band in front of so many people?

FVDP: We had one rehearsal before because Jonty was in Spain so I literally had ten days to learn the set. It was pretty nerve-wracking but also very exciting.

Has the dynamic changed within the band since Frank joined?

JB: Not really. He's just a great drummer, as was Felix too. They both have slightly different styles.

PJ: They're both really loud and powerful but Frank's style is a little more jazzy.

JB: He plays open-handed. He doesn't cross his hands.

Will Frank be involved in the writing process going forwards?

PJ: In the future, definitely. We haven't really written any songs since recording the album. Maybe in a couple of months time after we finish touring we'll sit down and see where it goes.

You're touring again in September. What can we expect from the setlist? Will you be playing all of the songs off the new record?

JB: We've learned what we can. Some songs are going to be difficult to replicate live without an extra member or two on stage. They possibly can be but it would probably end up sounding mediocre and I don't think that's the way to do it.

PJ: We just need an extra guitarist as some of the songs are quite experimental.

JB: We wanted to make them sound as best as we could and the only way to do that was to add layers. We wanted to experiment with completely different instruments.

PJ: So the set will be a nice mix of old and new songs. Whatever works best when we play it live.

Are there any old songs that probably won't feature in the set this time round?

PJ: We haven't played 'Feel The Light' in a very long time. 'Eros In Space' as well. That's another one we never really enjoy playing anyway.

Will there be any guest vocalists on the tour such as Najma Akhtar who sings on the album?

PJ: Hopefully Najma will make an appearance at some of the shows. She sang with us at the album release party which was amazing.

JM: There was a period of time when it worked perfectly, so i don't know what happened.

PJ: The set will be something like 50% off the new record, 40% off the old one and the rest from our EPs.

You're playing the Fuzz Club Eindhoven event in August. Will there be anything special in the set for that? A cover for example?

PJ: I think we're just going to do an energetic, 2-in-the-morning kind of set. We've never really been into doing covers. It's difficult to know what to play. If we did a cover of a really famous song so everyone can sing along it wouldn't be cool, and if we did a really obscure b-side or something people would say we were being pretentious.

JB: What we should do is a cover of 'She Sells Sanctuary' by The Cult. We managed to learn the whole song in five minutes in rehearsals once and it worked. It was only recorded using three instruments anyway. There's four members but only three play instruments. One guitar, one bass, one playing the drums and a singer. That was it.

With the advent of the PRS Keychange initiative to rightly readdress the gender imbalance that currently exists, particularly on festival lineups, do you think it could have an adverse effect on all-male bands in the future?

PJ: It's very difficult to be a band in the current climate anyway. I think it's great the PRS are doing something about female musicians being treated differently, but it's tough out there for anyone in a band right now.

JB: They should have introduced something like this a long time ago instead of continuing to sign awful male bands.

Has your outlook on being in a band changed in the past five years since Desert Mountain Tribe first got together?

JB: Not for me. Now is the time for a change. We're putting the effort in. We just need to reevaluate.