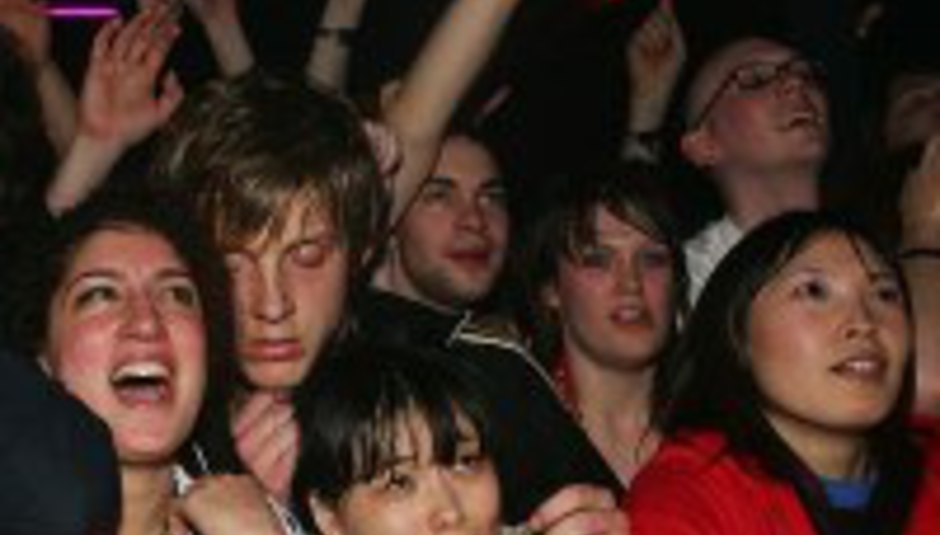 DiS was at The Camden Crawl last night, getting the fuck on down with Peaches Geldof and her posse. We tried texting you, our batteries died.

Not wishing to blow our own trumpet anything, but our show at NW1 was like, tooooo-tally the best, a packed house going absolutely mental for Foals’ typically pin-sharp headline performance. “This shit’s bananas, B-A-N-A-N-A-ANAS”, they bawl when they appear onstage, and they couldn’t have been more prescient if they’d have predicted a riot, frankly, given the carnage that ensues.

A frisky stage invasion rapidly becomes an onslaught but Foals just carry on regardless, or at least until their set-up gets knackered and they’re forced to take a quick breather. Who’d have thought partying and math (rock) could happily co-exist in the same sentence?

And this was just the icing on the cake: earlier we’d been lucky enough to witness the poised, Belle and Seb-esque pop musings of Malcolm Middleton, the Art Brut-ish witticisms of Ox.Eagle.Lion.Man, and the blissed-out shoegaze loveliness of The Kissaway Trail, who sounded like Arcade Fire trapped in an Appleseed Cast. In between, we also managed to inflict the new Battles record twice over on unsuspecting revellers. That shit’s so hot right now.

But remember that DiS sees all, so we also found time for another couple of hot dates with the night, or more specifically The Earl Of Camden, where Steve Lamacq had a couple of aces up his sleeve in These New Puritans and Xerox Teens. The former opened proceedings with members Jack Barnett and Tomas Hein playing stripped-down two-piece percussion-focused performance that featured both unheard material as well as twisted incarnations of previous aired tracks. Xerox Teens, or xx Teens as of this morning, impressed with their usual dose of trumpet-fuelled punk. They’ve slowly built a heady batch of tunes. This evening ‘Onkawara' is their finest moment.

Over at Oh! Bar we got manhandled by some over-zealous bouncer-types, who wouldn’t let one nice lady in while she was eating a sandwich, and watched Fear of Music, probably think they sound like some cool artrock band, but in truth were more akin to that tedious whine of Placebo. Sod it.

A lovely evening, then. Now we’re all sat twitching over coffee mugs in eerie anticipation of another evening’s debauchery, which will be ably assisted by the likes of Kid Harpoon and I Was A Cub Scout. We’ll text you yeah?