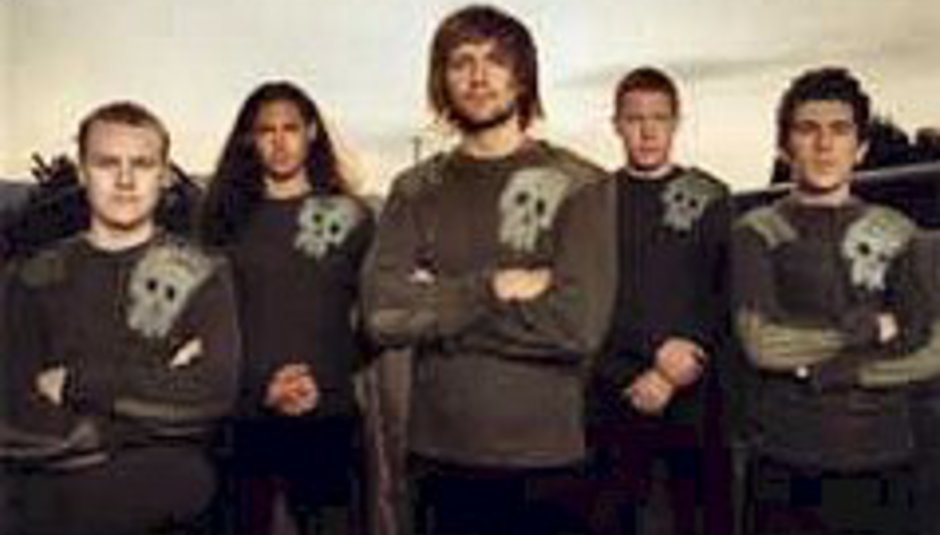 by [redacted] November 22nd, 2003
This year has seen Welsh Rockers Jarcrew tour their arses off, sign a deal allowing them to be fulltime rock’n’roll stars, and continue to hone their skills of mashing up musical styles. DiS thought it was time for a little recap of their story so far, so grabbed their chatty drummer Rod (a former window cleaner, believe it or not) for a few words.

Like many bands, Jarcrew formed at school, despite completely different tastes in music (“Black Sabbath is about the only thing musically we can agree on”) and even films. “None of us really got on, either,” says Rod, “Kelson was a bit of a pisshead and had his group of mates, and Ben and Rich had their groups of mates. I dunno how, but we just came together. I think we were all lookin’ for something and found it with each other. We’re all awkward people deep down and kinda drew into each other like a bunch of magnets.”
Did you ever play a gig there?
“Yeah. There were three of us and we played after the first school band, who were really popular. Everyone was dancing and watching them. Then we came on, and everybody left!”
Were all the teachers standing at the back?
“I dunno if it was even teachers. I think the cleaner was cleaning up! It was like a dinner dance, a school prom type thing, it was really embarrassing.”
After you left school, how did you manage to juggle the band between college and work?
“Kelson, worked in Tesco, which was a bit of a nightmare; we’d be coming back from gigs at five in the morning and dropping him off at work! He’d be so tired. It’s kinda moral-bashing, but he kept on keeping on. It’s a good laugh at the end of the day, like going out with your mates and getting drunk.”

The band initially found an outlet for their music with Cardiff-based label Complete Control (“They were just going to do a single then said Sod it - do you want to do an album? And we said Fuck yeah.”). Writing some of the some of the songs two weeks before heading into the studio out in the country, they knocked out debut album ‘Breakdance Euphoria Kids’ on a miniscule budget, in just five days. The result, released in July 2002, was a clash of five personalities, tastes and styles, from tight punk to disco beats and the kitchen sink. It’s a very patchy affair but does include the mighty ‘Paris and the New Math’.
The band don’t have anything against its re-release, though: “At first we thought, I dunno. We were living in a bubble and the only people who heard our record were our mates. You’ve got to realise there are more people out there who haven’t heard your band, and we want as many people to hear it as possible. It’s been re-mastered. They’ve beefed it up a bit and made it louder.”
Whenever you were playing before did you ever think ‘Oh no, we’re never going to get signed, things aren’t happening,’ or were you a bit more optimistic?
“This is probably going to sound like I’m lying but we never ever thought about it. We had other things in our lives… we knew we were going to get signed sooner or later, deep down, but we didn’t make an issue of it.”
When did Gut Records jump on board?
“It’s been a gradual thing. The A&R guy, Harry, would come to see us play and we get on really well with him. He’s just about our age and into the same bands as us. We grew closer and closer and stuff. They kept on waitin’ and waitin’, and we kept on waitin’ and waitin’ for the right time. We had a lot of growing up to do; our personalities, the way we looked, and by getting a record deal we thought all our problems would be solved. They tried to explain that it doesn’t work like that and you have to work your arse off.”
They were commenting about the way you looked…?
“Nah, we just tried to get better live and make more of a show of it. Trying to get tighter and everything, new songs and stuff.”
A lot of the songs you’re playing at the moment aren’t on that album. How do people feel about that?
“I think it’s cool. We were getting really bored of playing some of them cos we’ve played them so many times. We’ve had to put new songs in otherwise we would’ve gone insane. There’s no certain sound coming through on the new songs, we just write as many as we can and decide whether they’re good six months later, then rewrite them, balls them up a bit.”
Indeed, the band already have new tracks recorded since the re-release of their album (now just simply titled ‘Jarcrew’), with a view to releasing a ‘stop gap’ single in the new year: “As much as I love the first record, it could’ve been so much better. Some of it sounds like bits stuck together. We’re trying to make things now which are really flowing, simpler, more precise and focussed.”

Jarcrew have, it appears, done their growing up in public. Rod cites the band’s support slot on Mclusky’s tour earlier this year as a big turning point. “We learnt so much,“ he explains, “about ourselves and our place in the universe. I know that sounds stoopid, but we did, man! Especially Andy (Falkous, Mclusky’s singer/guitarist), he seems so focussed with everything, his lyrics and stuff. Really strong, simple and powerful, kinda like a laser beam or something. It makes you think about what you’re doing yourself. I don’t mean we tried to copy him; just in terms of really grabbing the songs by the throat, that type of thing.”

Through his teens as a regular NME reader (“it was my gospel”), he had an idea implanted in his head of what a band should look like. “It’s a kinda romantic view on music,” he admits. So, whose idea was it to wear those army jumpers?
“It was just a mistake! We wore all black for ages… it was kinda that emo thing – tight black t-shirts – and we wanted something different. A couple of the boys used to be in the cadets and remembered those wool jumpers with Velcro on the shoulders and elbows. We decided to spray a skull on the shoulders. They weren’t quite right to begin with because we tried making them too detailed. As you probably know, we used to wear red shirts with black ties, which became a bit of a nightmare with The Hives and when we supported the Icarus Line. They’re vice versa – black shirts with red ties. I thought, Aww, man!”
It seems they like to dress up others too: “One of the bands we toured with on the Biffy Clyro tour, Crackout… I dunno if I should name names, but their sound guy is a cockney punk guy who plays in Alabama 3, and he had something to do with Ozric Tentacles and plays in a band called The Cunts… Amazingly, we managed to convince him to dress up as a sailor. We went to this army store. For some reason I’ve always wanted to buy a sailor suit - a childhood ambition or something like that. I was quite comfortable in it. This guy put it on and we took a photo and laughed.”

I see. I'm quite sure that Jarcrew are more than capable of getting up to more naughty business than this, and that there’s something he’s not telling me! But I’ll let it lie just now. Maybe they’re saving it for the book. How about a nice parting shot instead, eh?
Seeing as you’ve learnt a lot about your place in the universe, what advice would you give to new bands? What should they concentrate on?
“Their confidence, definitely. Once you’ve got that, it’ll come through with your friendships, the band, and how you present yourself onstage. People can see those little cracks, and those cracks will get bigger, so you’ve got to really, really, really love what you’re doing. You can’t try to be something you’re not.”

‘Jarcrew’ is out now on Gut Records.