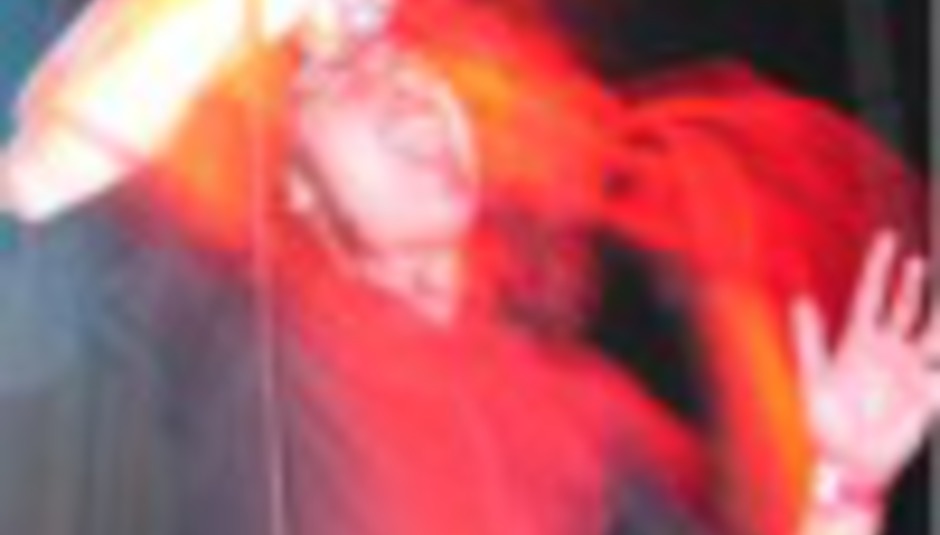 Leaving the past behind

Leaving the past behind

by Raziq Rauf July 26th, 2003
From the ashes of seminal Texan punks At The Drive-In rose two blocs: The Hair and The Rest. It wasn't a union to form ever again and so they went their separate ways. The Hair always seemed to be the spine of the group and continued to experiment, refusing to conform to any expectations or ideals. The Rest, however took the direction of either giving up entirely or going all guitar rock on our collective arse. The Hair have come to be known as The Mars Volta over time and display their keyboard noodlery and epic prog leanings with astounding grace and aplomb.

2002 saw Omar Rodriguez and Cedric Bixler bring their band over to the UK for some small shows but it was this year they were showcased in fine fashion on tour with the Red Hot Chili Peppers on arena stages the world over. This summer saw some more shows and an appearance at the MOVE festival in Manchester during July. I was given twenty minutes to talk about Irishmen and girls' pants with the mighty ‘froed one - Cedric Bixler - in a rather too plush London hotel…

Their debut album, ‘Deloused In The Comatorium’, was released this month on Universal Records and holds a very strong message within. Cedric explains that, “It deals with a friend of ours who killed himself about six years ago. He jumped off a bridge. Prior to that he had overdosed on morphine and had been in a coma for about a week. As he was one of the people responsible for a lot of the ways we are musically, philosophically and spiritually this is our present back to him.”

While it was very much a rites of passage beginning to The Mars Volta’s career, developing the record took a lot of collective thought especially as much of the content relied on Cedric’s imagination: “Because he was in a coma we never knew exactly what he was going through so I took the liberty to fictionalise things he was thinking of. So it deals with taking bits and pieces of his real life and putting it in a fictionalised setting instead of dragging a lot of names through the mud. The title deals with the people who treated him like a beggar - someone who had lice. It was a necessary exorcism and it’s a gift for him. If you believe in purgatory then he might be lost out there, then this might be our lighthouse for him.”

The message on the album more or less remains just there. Taking an entirely different angle on their live shows, Cedric explains how their performances are merely spontaneous exhibitions of their music, “We don’t wanna play the album to death because we’ll get bored. Our drummer never plays the same parts, I forget the lyrics, I like to ad lib. We just have the courage to play three songs in a half hour!” They almost sound like hippies, but when compared to his former, infinitely more energetic and arguably much more exciting band, Cedric is reflective: “I guess that’s just our self indulgent side. The more a band caters for its audience the more dull they really become. The more of a parody they become. We play for ourselves and let people watch. They get more than just the album. The message when we play live varies a lot. There are older people coming to our shows now. I relate to older people more than I do to younger people. I met some lady in her 50s who came from Finland who said, ‘I enjoy all the jamming. Please extend them longer’. She must’ve come from a different era.”

Another aspect of The Mars Volta that differs vastly from the previous career path is the touring. While ATD-I paid heed to the benefits of lengthy and near-constant nationwide and worldwide tours, now it is a much less frequent occurrence: “The touring was one of the added ingredients that led to our demise. Sometimes when you’re in a band, the hype is rolling and the machine is going; you forget to take a vacation. It’s definitely a conscious effort to tour less or we will follow in the footsteps and make mistakes.”

The demise in question was littered with uncertainty, at least on the part of the public. With the announcement of a hiatus, many fans were expecting a break, not a break-up. “It was just a way of telling people we didn’t wanna do interviews and tell people about it. Everyone else in the band knew we quit. It’s like telling your kids that mommy and daddy are just gonna be separated for a little while.” Bless ‘em for sparing our feelings so. “It was a messy break up. We spent five or six years in a van with everyone. There’s people you relate to and there’s people you don’t relate to and being in a shotgun marriage like that you realise what you don’t like about someone and you don’t wanna spend the rest of your life touring with them. We don’t talk much and if we do it’s this awkward politeness.”

How much did Jim Ward sell-out or did he just continue to rock?
“When we wanted a break from ATD-I, Jim went to a concert and talked to Bono. The previous time we talked to Jim he was just like, ‘I wanna go home, I wanna get married, I wanna be away from this too.’ Then he meets this small Irish man and gets convinced to go touring again and we were just like, ‘You are so full of shit!’ That was when we knew he sold out. It takes Star Power to motivate him. I think that’s why we’re different and that’s why we have two different bands.”

Jim signed to Dreamworks and you to Universal. Which is worse?
Universal owns DreamWorks! The more evil. The more obvious choice!

Despite the clear animosity held toward the Sparta frontman, a common link remained between the bands in Jeremy Ward. The cousin of Jim, Jeremy was the effects specialist in The Mars Volta but sadly passed away earlier this year. The band decided to continue and are unsure as yet of any effects: “This is only the third gig - we have to wait for a full US tour. We have yet to see what it’s like without Jeremy. I know that he would’ve wanted us to keep going and that what happened was a mistake and he had a lot to look forward to. He was in the middle of writing a book. There’s not a lot of people like him. The way Hunter S. Thompson described his lawyer, who was from El Paso too - Jeremy was one of God’s own prototypes, not meant for mass production. God took him back.”

When quizzed upon the possibilities of future success, Cedric is conservative in his aspirations, “I can’t see the albums selling millions. I wish the albums would have the same effect as ‘White Light, White Heat’ did for me. Velvet Underground’s first albums didn’t sell very well, but everyone who had one made a band. I enjoy walking round my neighbourhood but we do get people coming to our door asking for us. But they’re not intrusive, they’re not paparazzi. We’re not stars. We come from a punk rock world so people understand and have that respect. If we hadn’t toured for five years and eaten shit then people would approach us differently. We are in a sense a working class band and people latch onto that.”

What is your favourite cheese?
Soy cheese, even though it’s been questioned as not being completely vegan because it has caesium added to it, but I’m not some vegan Nazi so long as its not cheese… It’s better for my throat because the promoters in the states buy you pizzas and it works against you because the following day you have all this phlegm build up. People may disagree but I guess it’s just kinda weird that you drink something from an animal instead of from your own mom.

When did you last have your hair cut?
Couple of days ago in this hotel. Someone told me I look like Kirk Hammett [Metallica guitarist] and I don’t really wanna do that. I just needed a haircut.

Do you buy your trousers in kids sizes? Why don’t they fit?
They’re girls’ pants [ladies’ trousers]! It’s a pain in the ass to go into the store and get laughed at cos nobody wants to make these pants for guys right?! One place we go the guy’s really stoked that we have the courage to go in and buy girl’s pants [ladies’ trousers].

The Mars Volta will be performing at this year’s Reading Festival on the Radio 1 Stage and somewhere in Leeds around then too. Read about the album 'Deloused In The Comatorium' here.