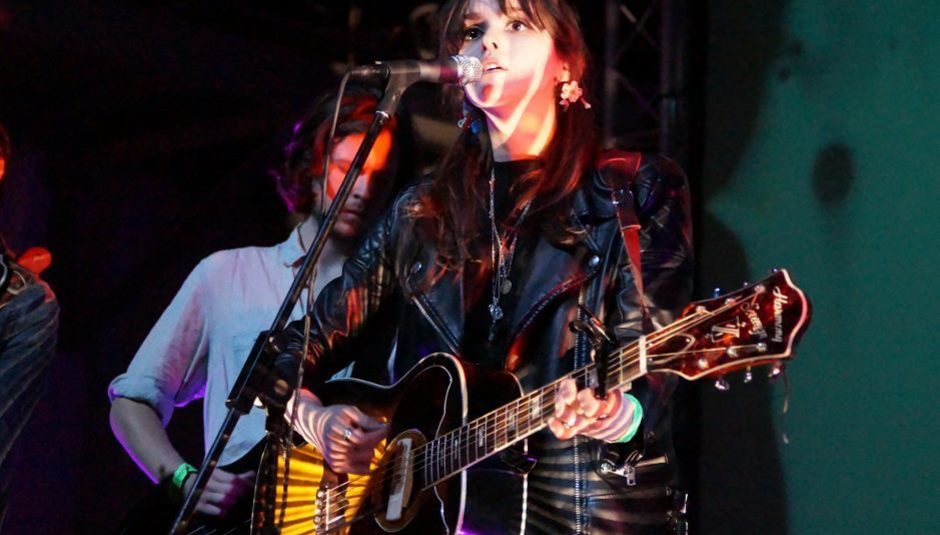 While Bill Shankly and The Beatles may have been responsible for putting Liverpool on the map fifty years ago, there's a new wave of cultural alchemists keeping the spirit alive. Forget nostalgic trips down Strawberry Fields or Penny Lane. This new breed have been casting their psychedelic eyes over the city's landscape for the past four years.

Indeed, when the International Festival of Psychedelia (or Liverpool Psych Fest as it's come to be known) first opened its doors in 2012, the scene from which it emerged was still very much an underground phenomenon. As the psychedelic scene has grown, so has Liverpool Psych Fest to the point where weekend tickets are now sold out within weeks of being available and day passes aren't far behind them.

As well as a slightly increased capacity (just over 2,500 we're politely informed), this year's event also saw the introduction of a new stage, the District. Set on Jordan Street just around the corner from the festival's main site on Greenland Street, it proved to be a popular venue, with queues forming from mid-afternoon on both days hoping to catch a glimpse of acts like Magic Castles, Hey Colossus and Graham Massey's Toolshed (more of whom later).

With more people and more space comes a bigger budget, and judging by some of the artists booked this year, one suspects those extra pennies may have been spent to secure the likes of headliners Spiritualized and artist in residence Anton Newcombe. Indeed, this year's line-up boasted an eclectic mix of acts covering every angle of the psychedelic spectrum from all around the globe.

Aside from the fantastic array of musical talent on offer, this year's additional attractions included the Pzyk Pryzm, an audiovisual environment featuring assorted works and performances including the much-vaunted Thorium 232 collaboration between Naut Human, Anton Newcombe, Li Alin and Michael Saup. Over in the Pzyk Cinema, The Chrome Sugar Shack curated a series of experimental cinematic delights including Rachel MacLean's 'Over The Rainbow' and Johnny Woods 'Breakaway' while the Musings In Drone conversation programme took over the space on Saturday afternoon. With the Human Soup art installation, Pzyk Skreen screenprint studio and even a coffee boudoir setting up camp outside on a street corner, the Camp & Furnace and its surrounding area becomes its own unique village for this increasingly special weekend.

Nevertheless, it's the musical delights that have undoubtedly brought the masses to Liverpool this weekend and on the Camp Stage, French collective The Feeling Of Love get Friday's proceedings off to an explosive start. Fusing a concoction of blues orientated rhythms with heavily orchestrated repetitive riffs that caress the soul before bludgeoning the senses.

Which makes Dengue Fever's mellifluous Cambodian influenced pop soothing by comparison. Singer Chhom Nimol is a captivating presence in her own right, leading both band and audience on several voyages of discovery that hold no frontiers. Their Eastern flavour is rapturously received out front as an almost communal spirit takes over the Camp's vast confines for the duration of their set.

Dutch singer/songwriter Jacco Gardner may be a doppelganger for Kurt Cobain, but his wistful vignettes and carefully constructed instrumental wigouts place him somewhere between the cordial folk of Donovan and panoramic soundscapes of Gnod. Tess Parks & Anton Newcombe can already lay claim in crafting one of 2015's finest records with the gorgeous I Declare Nothing. Live, the dulcet tones of Parks backed by a full band including Newcombe on guitar makes for one of Liverpool Psych Fest's most intense performances. Songs like 'Melorist' and 'German Tangerine' fill the room with an air of elegant dignity as monochrome images of Parks project onto the screen behind with spectral grace.

With a large crowd already assembled at the Camp Stage, Russian outfit Pinkshinyultrablast make a valid claim to not only being the loudest band at the festival but also in their homeland too. 'Metamorphosis' sounds like a dream being constructed then demolished in seven minutes, while 'Holy Forest' out Valentines MBV for sheer aural ferocity. By the end, the band - and frontwoman Lyubov Soloveva in particular - look exhausted while several hundred punters pick up what's left of their eardrums off the floor.

Henry Dartnall introduces Young Knives with a curt "We used to be a shit band." For the record, they didn't, but anyone expecting a run through 2005's Mercury nominated Voices Of Animals And Men might be forgiven for thinking they'd come to see the wrong band. A lot has changed in ten years and Young Knives sound is one of them. Gone are the angular post-punk diatribes of yore to be replaced by wave upon wave of atmospheric post-prog that owes more to the likes of Frank Zappa than Franz Ferdinand. What's more, they sound all the more impressive for it.

When three blokes dressed as wizards take to the District stage things start to get a little weird. When someone remarks one of them used to be in 808 State - of course, THAT Graham Massey - it begins to make sense. Playing a set of improvised, free form jazz that veers from Miles Davis inspired fusions incorporating space rock passages and electronic elements not a million miles away from Sun Ra's more experimental workings. Graham Massey's Toolshed emerge as one of Friday's - if not the entire weekend's - undisputed highlights.

A lot has changed in the world of Factory Floor since the last time we set eyes on them. Now stripped down to a two-piece of Nik Colk Void and Gabriel Gurnsey, their purely electronic set might have seen them ditch the live instruments but thankfully, they've lost none of the intensity that's made them one of the most captivating bands on these shores for the past five years.

As the sun shines down on Liverpool, Saturday gets off to a blistering startcourtesy of Portuguese drone outfit Dreamweapon and Dutch post-rockers Radar Men From The Moon. DiS immerses itself in some spoken word and we're particularly enamoured with John Doran and Julian Marszalek from The Quietus talking about the former's excellent book of memoirs, 'Jolly Lad'.

Back to the music, Texas combo Indian Jewelry are a revelation. Playing a set mostly tailored towards this year's Doing Easy long player, they're a technicolored melange of noise and confusion that's equal parts Black Angels and Mary Chain. Yet at the same time uniquely emgaging to the point of transfixion. With long queues forming outside each of the four venues, we choose the Furnace Stage where local chanteuse Jane Weaver's winsome folktronica also dazzles and delights, leaving the packed room in a similar state of stasis.

Having slayed Liverpool Psych Fest's Camp Stage two years ago, Hookworms return on the Furnace Stage is blighted when they have to cut their set short having slightly overran. Nevertheless, what they do play is easily the most intensifying set of the day. Taking the stage as the now familiar opener 'Away/Towards' kicks things into action, frontman MJ is an unparalleled bundle of energy, almost throttling his keyboard several times along the way. The rest of the set made up from last year's The Hum, it's 'Radio Tokyo' and 'On Leaving' that resonate intently to the point we're convinced they're Minor Threat playing space rock with better effects pedals.

Perhaps the biggest coup in Liverpool Psych Fest's short history would be getting a band of Spiritualized's stature to headline. Having formed the band a quarter of a century ago not to mention being a founder member of the legendary Spacemen 3 eight years earlier, Jason Pierce is arguably the nearest thing to psych rock royalty currently making music. Having played a new song ('Here It Comes (The Road, Let's Go)') on the Park Stage at Glastonbury three months ago, it's the older material that makes the biggest impression here. An elongated 'Hey Jane' dropped early in the set, 'Lord Let It Rain On Me' and 'Soul On Fire' provide the melancholia while 'Electricity' sparkles with... electricity. 'Come Together' also takes an extended journey courtesy of Pierce and fellow guitarist (and longest serving member) Tony 'Doggen' Foster's dueling six string salvos. Nevertheless, it's the inclusion of Spacemen 3 numbers 'Walkin' With Jesus' and 'Take Me To The Other Side' that steal the show, both hoarsely bellowed back by the now misty eyed congregation forthwith.

As this year's event draws to a close, it's safe to say Liverpool Psych Fest once again exceeded all expectations. Now firmly entrenched as Europe's leading psychedelic gathering, 2016's landmark fifth edition promises to be an unmissable spectacle. The most perfect of weekends, in every conceivable way.