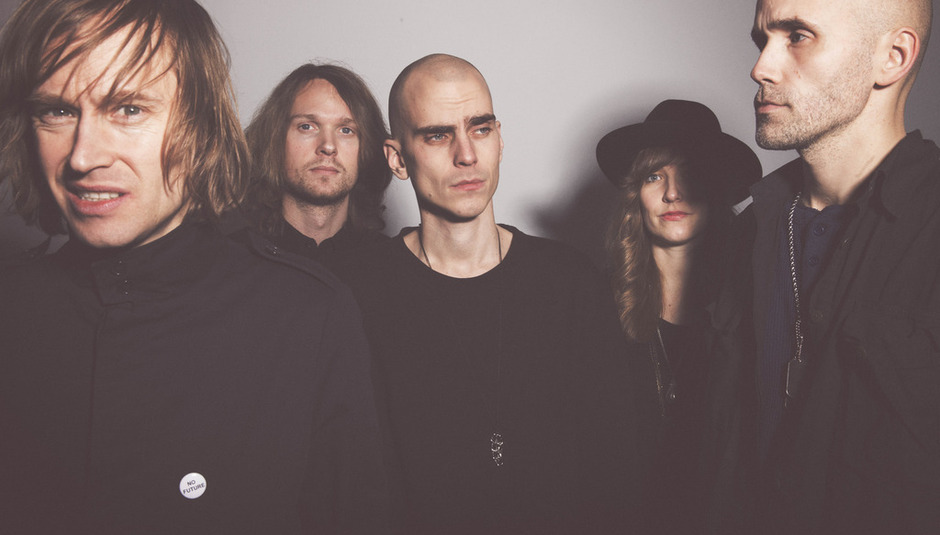 You would have needed to have been living under the most soundproof of rocks to have managed to avoid Refused’s reunion tour last year. After years of speculation - including a memorable jumping of the gun by Zane Lowe back in 2010 when the Swedish punks had nothing more than a reissue to announce - Dennis Lyxzén and his men embarked upon a year-long reconvention, playing a slew of shows on both sides of the Atlantic.

Refused’s revival was as far from cynical as you could reasonably imagine in a musical climate dominated by cash-ins. After kicking things off with a beautifully heartfelt statement of intent on their social media pages, the realisation soon followed that, if anything, their songs were more relevant than ever in a never more uncertain world, with the title of their final record, The Shape of Punk to Come, proving incredibly prophetic. How ironic, too, that it would play out at the same time as At the Drive-In were succumbing to the ‘take the money and run’ school of thought that underscores so many reunions.

With Refused - at least for now - returning to the back burner, Lyxzén has forged ahead with taking one of his slew of side projects to a wider market; INVSN have just released music outside of Sweden for the first time, in the form of a masterfully dark, post-punk-driven ode to the precarious nature of the times we live in.

As a punk musician, what is it that appeals to you about the more restrained, less chaotic sound of the new INVSN album?

For me, punk has always been more about a way of living your life and an attitude rather than just purely a sound. I never liked to restrain myself to a particular idea of what one should be or how they should be that way. The restraint in our music is another form of expression that we wanted to experiment with. Under the layers, our background and our anger are still intact. That said, it’s a bit of an oxymoron to talk about punk musicians, you know? [laughs]

When Refused reformed last year, it was so apparent that, if anything, those songs were more relevant than ever in 2012. Weren't you tempted to continue playing with, and maybe even making music with, those guys? Was it difficult to leave behind those songs again, knowing how relevant they still are?

Not really. It was a great year and we had a lot of fun with it. It was both rewarding and sort of sad to see how relevant our lyrics and ideas still were. I've never been a nostalgic person, so moving forward and moving on is always the most relevant thing to do. I want to create songs with the same meaning, but here and now.

Why have you decided to make a record in English with INVSN? Is it part of a wider attempt to broaden the band's appeal beyond Sweden?

Sweden is a small country and Swedish is a language that few people actually speak. It was a great challenge to write and record in my native language after years of subscribing to the more commonplace rock n roll language, but there are certain limitations that we can't look beyond. Like the fact that there are only six good rock clubs in Sweden. I mean, really, the biggest incentive to release the music in English was the fact that we were very pleased with the way the music and the band turned out. It seemed selfish to only let Swedish people partake!

Have the seventies and eighties influences on the record always been interesting to you? There's a real New Wave sound to a lot of the tracks.

I like music. We all like music. We borrow and steal and get inspired by a multitude of things - some more obvious than others. I’ve always been a fan of all aspects of music. Punk, New Wave and post punk have always been a part of our record collections. I think that we never set out to make a record that sounded 70s or 80s, but to create a record that is more here and now, you know? Albeit with some references to the past!

Do you think taking a more subtle sonic approach, as INVSN have, can be as effective in getting a message across as angry, noisy punk rock? Is it something you've maybe come to realise as you've gotten older?

I don't think that it has anything to do with age really. It is just different aspects of life and our love of music. I am not sure that INVSN has a more subtle sonic approach than the other stuff that I've done. It might be a bit more restrained and not as in your face as something like Refused, the emotions that kind of tend to arise from uncertainty, and frustration - they’re all still there.

Are there any specific political or social themes you feel you've tried to address on the INVSN record?

If you look under the surface, the political and social issues are all in there; the way capitalism treats people, the way we accept this world order and the way we simply hide and hope that it isn’t going to affect our own lives. I’m sick and tired of cowards. There’s no question my generation has been a disappointment. I just think it’s more that the record is all written from a more personal perspective that may not be as explicit as usual.

'#61' seems to be about how music can be important in bringing about change - what was on your mind when you were writing that? Was the societal impact of the Pussy Riot situation an influence?

I think it mainly touches upon the fear of music becoming a really lame, escapist exercise; it’s happening all around us. That was really why the Pussy Riot thing stood out; it proved how powerful a valid musical threat can be. The state’s response to it has been completely saddening.

This is the first time INVSN are really aiming at the overseas market, too - do you think it will ever get easier for bands to be commercially successful in a world that values materialism above creativity?

I can’t see it getting any easier. Creativity in the true sense has nothing to do with making money or becoming famous or selling products. Creativity means challenging yourself and pushing yourself to the uncomfortable and weird. History has proven itself to be full of wonderful and creative people that never got their due because the world has always been more interested in bland materialism, you know? It’s a huge struggle to get away from that.

Since Refused first split, you've flitted between quite a few different projects. Do you think you work best when you've got several different things to focus on?

I’m definitely a restless soul. I like to move. Constantly. I am at my best when I have tons of ideas and projects floating around. Sometimes it can get a bit hard to keep track of everything that is happening, but it makes me feel alive, if nothing else.

Do you feel like the meaning of punk has changed for you personally since you first started out as a musician?

Of course it has. It’d be strange if I had remained static for the past twenty-five years. I think there are certain elements of punk that made me fall in love with it and that I will always keep with me. The definition, though, and the idea of what it represents differs hugely from when I was fourteen years old.

Is INVSN your sole focus for the foreseeable future now, or are you going to be juggling it with AC4 stuff? Are Refused done forever?

At the moment, INVSN is my only project. With AC4, we’re recording a couple of songs for a compilation, and then we’re doing one final show in Umeå in December. Refused is fucking dead, of course, but who knows? One day we might do more stuff. We had a great time last year, and I think that we are keeping the door a bit open. But only a little!

INVSN is out now via Razor & Tie.

"We’re really great at moaning about ...