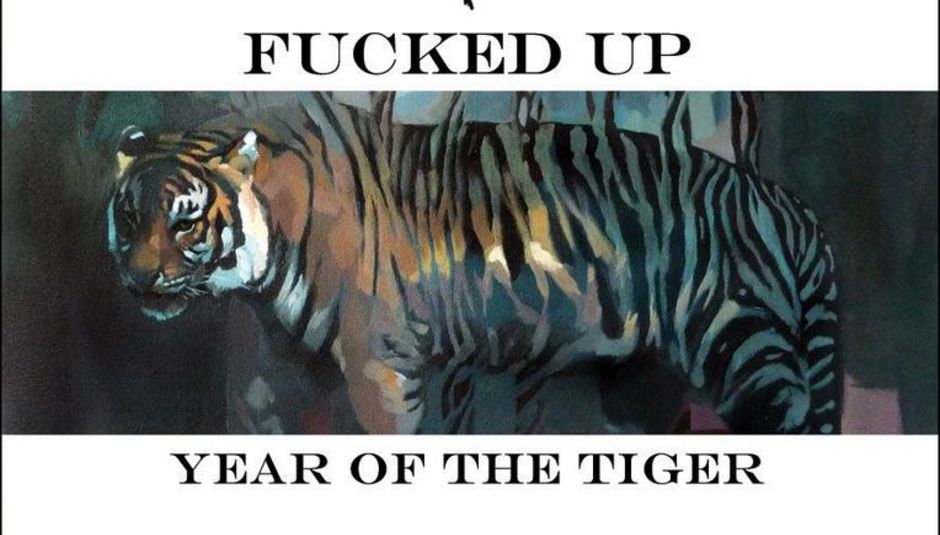 Fucked Up are going on an adventure. And as adventures require a great deal of planning and preparation we shall forgive - if not actively praise - them for taking a single’s length to even get out of the bloody house and start their song. It works because it's so gloriously majestic when they do, Jarmusch droning sombrely on and Damian Abraham raging about flesh spilled. 'Year Of The Tiger's composition even manages to recall a little of the grandeur of Television, all stately chords and mildly ridiculous stadium drums. The last third (though with a single this massive, one should really call it an ‘Act’) introduces Annie-Claude Deschênes breathing loopily about how ‘the end is near’ alongside the guitar lines. And then the band takes over and runs off with the entire musical enterprise, all elements brought togther. What lovely ambition it all has.

This week’s singles are right fidgety fuckers and Mount Eerie is no exception. Or perhaps it is simply a naivety of approach and production, where you can introduce elements regardless of whether the pop textbooks say it is allowed. Certainly there’s a delicious aimlessness at work on ‘Distorted Cymbals’, with its insistently basic bass drum and shimmery minor-key piano chords. To make a record this affecting when it purports to be about flat metal discs is rather impressive.

Disclosure follow up the marvellous ‘Carnival’ with some happy house climbing chords and beatifically positive vocal samples. And though they are too young to have had direct experience of the tricks in their musical toolkit, they wield them as if they had danced in outsize t-shirts to them first time around. Really good.

Gotye feat. Kimbra - ‘Somebody That I Used To Know’ (Communion / Island)

Rinky-dink xylophone and pop-polka strums make up Gotye’s framework, over which he wants to bollock on about how ‘You can get addicted to a certain kind of sadness’. But after a minute and a half he switches to a more metallic upper register and yes, really does sound, rather a lot, like Sting. Which is alright if you can listen to Sting without wanting to put your hand in the microwave to restore your Chi but I can’t - especially not when Kimbra comes over all Katy Perry and the pair of them warble off, bellowing into each other's faces and emoting as if a firing squad were involved. I don’t want to hear it, I don’t particularly want to see the little trail of Gotye’s tummy pubes in the video and I just thought if we had one Sting in the world, that one Sting would be enough.

Songs about sailors who long for dry land - as well as the girls who walk upon on it - aren’t very common these days. And though ‘John Taylor’s Month Away’ is full of beauty and pathos, there’s a bit of me that shivers when I think about how the modern world will insist on romanticizing the Real Jobs of Real Men, especially now there are few writers like this around to inject some cold, hard plainness into the proceedings. Instead it is a world where faux-bearded, jelly-postured Manboys in Stoke Newington trot off to buy records about sailors, and wear Real Men's outfits (Barbour jackets, Scandinavian workwear, fishermen’s knits) - even though the nearest they get to entrails will be on the menu at Silage, London’s hottest fish offal restaurant, everybody’s talking about it. Of course, none of this complete dreadness is either King Creosote or Jon Hopkins’ fault. And as dictating who is allowed to buy particular records/clothes (or decrying why they do) is a teeny tiny bit fascistic, let’s just listen to the nice song about the sad sailor. After all, it is excellent.

‘Idiom Wind’ had me at ‘idiom’, it being a word that crops up so rarely when writing about music one might be tempted to remind oneself what it actually means. Strangely, for a single so lyrically insistent on pinning down the motivation of its subject (‘Try getting off your ass’ / ‘Remember how you used to take the bit between your teeth?’), there’s quite a lot of billowing introspection going on sonically - from the gently-pulsing, echoed synths and strings, to the brushed-cymbals and jazzy time signatures, to the not-arsedery of the vocals. More of a curiosity than a single, but intriguing nonetheless.

‘Gonna Be Sick’ is a stealthy pop song that begins with some whingeing. ‘I was such a wreck back then,’ sings the beautiful Olivia Merilahti - and I think it is a song about how if you let someone fix you, it comes at a cost - particularly if they put all their energy into said fixing. Anyway, so Olivia turned round one day and realised that this bloke who she had thought ‘was tailor made’ for her was now a dry husk of a human. And that’s when she decided to turn the whole experience into a jaunty, perfectly-balanced musical confection that has so many elastically-played marimbas on it, you almost forget it’s about human ruin and/or vomming. Very good.

‘Vacationation’ uses dogs’ barks as punctuation and it is going to spend two minutes and twenty three seconds winking at you and nudging your stomach with its elbow. Essentially it is surf pop that is wearing a comedy tie and socks that have cartoon characters on them, very possibly odd ones. Such is its jolly air that you suspect they have used a whoopee cushion in lieu of a bass drum. And yet! It is not actually that annoying. How?

On which Frankie Rose has judiciously cast off her Outs. Maybe they were holding her back, because ‘Know Me’ seems to be exploiting a far more strident pop seam. Especially on the chorus, where those nagging doubts about the Aha-style drums start to fall away. Less a single than a collection of out-takes, ‘Vedley’ still somehow has a charm all its own. At first it wants to bust your speakers for which no apologies will be made, and then it goes all bashy and lo-fi, and then it tries to serenade you with a waltz, and then it wants to crunch all its guitar noises in a trash compactor. Changing every 30 seconds 'Vedley' is either utter, wandering, Indie-with-A.D.D. rubbish or a whole album in the space of a single. Either way, quite like it.

"Nostalgia...can make for some really...