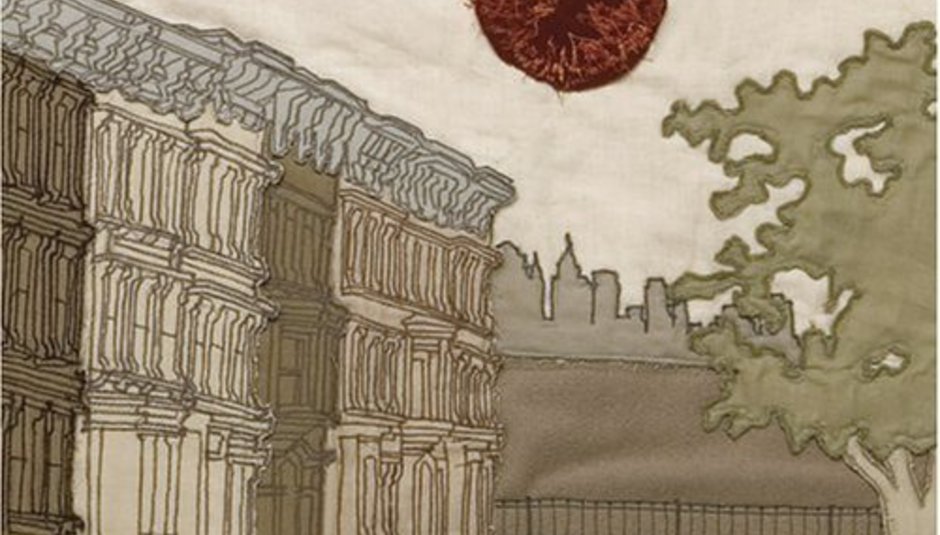 As part of our 10-week “DiS is 10!” celebration, we’ve asked 50 of our favourite people to tell us about one of their favourite albums of the past 10 years. This is not a best or 'top' anything list, merely a list of individuals sharing their personal highlights. Here, DiS contributor and editor of this week's content dedicated to solo artists (compiled here) James Skinner shares his choice... By way of Desaparecidos some years earlier, I was already a big Bright Eyes fan by the time I’m Wide Awake, It’s Morning arrived in January 2005. In fact I was counting the days until it and Digital Ash in a Digital Urn received their twin release, and upon finally acquiring the pair I played the former so much that my friends and flatmates were frankly astonished. Ash, fine as it is, never quite resonated with the same clarity as Awake (possibly for reasons explored here), which exceeded my hefty expectations and then some. It sounded about as perfect as I could have hoped for.

Talk of drum machines and double LPs abounded in the run-up to release, Conor Oberst and Mike Mogis eventually choosing to release two separate albums. Awake was intended as an acoustic affair in the style of Oberst’s songwriting heroes from the ‘60s and ‘70s – a lighter complement to Ash’s dark indie-pop which wouldn’t scare off his growing fanbase. The end product intentionally resembles seminal works by the likes of Bob Dylan and Neil Young, and even went as far as to recruit Emmylou Harris on backing vocals – a notable coup for the young singer, whose collaborators here also included Jim James of My Morning Jacket and Jake Bellows of Neva Dinova alongside a raft of Saddle Creek accomplices, including Jason Boesel (of Rilo Kiley) as sticksman and Maria Taylor (of Azure Ray and Now It’s Overhead) on backup.

Here’s the thing: depending on who you talk to, Awake is either regarded as the apotheosis of Oberst’s strengths or a tired facsimile of earlier glories. Either way, it is generally accepted as the point where his music shifted into the more traditional folk-rock fare which has coloured his output ever since. From the decent, if flawed Cassadaga through his solo and Mystic Valley Band offerings, every record he’s released in the interim has found some critic touch on a newfound maturity of sorts, but in reality this was the album he stepped up to the plate as a singer and songwriter of note: fleshing out his themes as to be less self-centred and turning in a set of simple, simply beautiful songs.

Ostensibly dealing with Oberst’s move to a New York apartment (though some had existed for years previously), these songs are haunted by Iraq and the ‘War on Terror’, establishing a growing sense of disquiet as he attempts to figure out his place in the city and the world at large. The opening ‘At the Bottom of Everything’ finds Oberst happy – delighted, almost – to acknowledge that in the grand scheme of things, he is “really no-one,” while on ‘Poison Oak’ he is but “a single cell on a serpent’s tongue.” His longings take centre-stage here, and transposed onto wider engagement with the world surrounding him, they become universal. Against a grand New York skyline, the stark, wintry ‘Lua’ details a fraught relationship born out of substance abuse and abject loneliness, but as he repeatedly sighs “it was so simple in the moonlight” to close it sounds more like a heartbreaking acknowledgement of defeat on a much broader scale.

Countering that somewhat is the presence of ‘First Day of My Life’. The finger-picked chord pattern owes plenty to ‘Don’t Think Twice, It’s Alright’, sure – just as ‘At the Bottom of Everything’ effectively reverses and reboots ‘The Times They Are a-Changin’’ – but the sentiment is pure, and the result is something almost absurdly lovely; likely the sweetest Oberst has ever written. ‘Poison Oak’ bridges the gap between Awake and his earlier albums, recalling a time he “still believed in war,” (I love the tiny drum fill on the floor-tom here before the song hits its farewell crescendo) while ‘Another Travelin’ Song’ and ‘Land Locked Blues’ tackle Oberst’s penchant for wandering and nomadism in a series of arresting images and gorgeous harmonies.

I’ve tried to refrain from zoning in on a key lyric. Five years ago I would have reeled off a breathless spiel, or maybe just suggested listening to the wonderful ‘Land Locked Blues’ in its entirety and taking your pick. Yet one that keeps returning to me as I write this comes courtesy of ‘Old Soul Song (for the New World Order)’. The song itself is a filmic depiction of Oberst and a friend heading out to a demonstration in the city – “the place we heard that everything would be” – armed with a camera to document the occasion:

This, ultimately, is what I think the album is about: the search for meaning and truth in a confused and contradictory 21st Century. Love and acceptance are sought after too; are intrinsically bound to these things (all of which are signified by the “yellow bird” that crops up throughout, making his perch on the disc itself). It’s a love letter to New York City every bit as vividly realised as The Catcher in the Rye or Manhattan, illuminated by this pursuit, exacerbated by the fact that the record’s protagonist isn’t entirely sure what role he’s supposed to be adopting himself.

Of course he has a clue, and a raft of romantic ideals behind him, but by the time the record bows out with the cacophonous incredulity of ‘Road to Joy’ he’s committed to little else other than to “fuck it up… [and] make some noise.” That this exquisitely painted milieu of uptown lofts and lonely bars, sympathetic waitresses and apocalypse-mongering preachers, trains underwater and flickering 24-hour news channels is nevertheless leavened with glimmers of hope and beauty marks I’m Wide Awake, It’s Morning as something truly special: a ragingly eloquent, soulful document of our times.