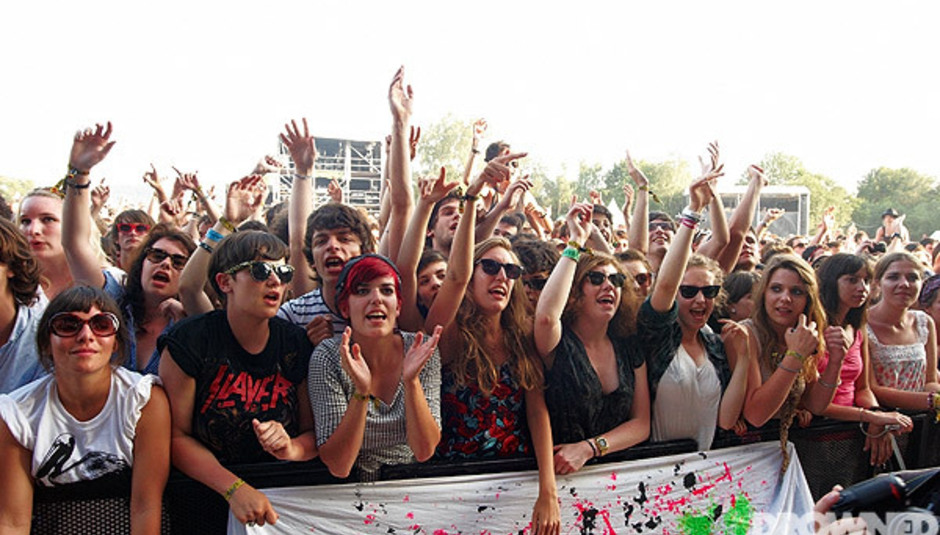 On the last day of a festival, especially one in a foreign land, it is customary to feel a little low, a little humdrum. And I am no exception, for I wake on Sunday a little sadface that it will soon be over, and I shall no longer be able to spend my days breezily, vaguely ished while watching bands and throwing mango beer in my facehole.

But it is not all bad. At least, not until The Drums have stopped playing. Because I do not like them, I feel their hype was foisted upon us like a big sack of something too hard; too arduous to carry. And no one wants to feel like that about popular music. Music should take a weight off, no?

Also, surfing. Which winds me up something crazy. I mean, philosophers in wetsuits, what could be more dread?

In any event, I appear to be almost entirely alone in this view. Les festivalliers are not irked by what I perceive to be the worst ‘merci’ said by a non-Fronch all weekend, or troubled by The Drums unconvincing posturing. I must face it, there are flipping loads of people here what are loving it.

No really, guess what?

IT IS BLOODY BOILING AGAIN.

In a nice way though, because it has rained.

On ‘Make You Mine’ it strikes me that The Drums should sound like a more muscular Orange Juice, and perhaps that is what the crowd are hearing. But when they say things like ‘This song is about having fun, which is MOST IMPORTANT THING YOU CAN DO.’, I just look up from my fringe and think, ‘Hmn. Divs.’ And then we bugger off, doing Him Out Of The Drums impressions.

I never said I was clever. Julian Casablancas, however, I can ‘get on board’ with. Now, I have seen The Strokes at Benicassim and even though I wasn’t even that into them at the time, I know they do a ‘show’. They - I think in common with The Franz - are a proper party band [I hate the word party, I hate myself for using it]; they are a band you should not worry your gosh-darned self about. If you are willing, they are able, and you will have a good time. There is something of the rock cheerleader about them.

Also: a quick Girls On Shoulders count for Julian Casablancas? I make it eight.

And then I have one of those divvy mindwangs where you think you have discovered the essential essence of something. I am on my own, and I am thoroughly enjoying all the perfectly placed dischordancy; I don’t even mind the old men in leather waistcoats that make up Julian’s 7-person band; or the fact that he looks really, really ropey. It is when he is doing ‘Out Of The Blue’ (a very favourite), and I think, to myself ‘I HAVE FINALLY CRACKED WHAT BUTTONS THE STROKES AND MR. JULIAN CASABLANCAS ARE PUSHING! IT IS THE MINOR KEY THING! FACED WITH A SWEEPING VISTA OF POP OPTIONS THEY CHOOSE THE PATH MARKED 'MINOR' EVERY, EVERY TIME! IT MUST BE SOME SORT OF MACHIAVELLIAN ROCK SCIENCE! YES! I DONE CRACKED IT! THE RICHES OF THE WORLD WILL BE MINE! AND I WILL GET A PROPER JOB ON A SERIOUS ROCK MONTHLY BECOS OF MY FEERIES!’

Or something along those lines. Basically, despite his wearing a hideola patchwork red snakeskin leather bomber jacket (and it really was all of those things), I made that face that Jon Ronson once did a wonderful feature about. It is the one where you wonder what someone is thinking about because they are smiling in a peculiarly beatific, mysterious and secret way. That is the smile I do while I am watching Mr. Casablancas, and I think this explains everything.

Not long after he has finished and we are still stood, a-sheltering and a-fanning ourselves, I have an encounter with a little French girl. I make the note ‘pint-sized Daria’ in my book because she is very scornful, she gives me the literal up-an-downs, taking in my Press lanyard. What I want to say is ‘Hey little girl, I ent lording this, this is a treat for me, ya na?’

But I don’t know how to say that in Foreign. LCD Soundsystem are next, and it is fair to say James Murphy is ‘up there’ on my list of Pashlets I Have On Well Built, Grown Up Men Of Pop. Bloody hell, he looks AMAZING, all-white in jeans and a YSL t-shirt but with schoolboy, just-cropped hair. But it is not all pervery, because they sound AMAZING too. ‘Drunk Girls’ is magnificent, exactly what you want to hear when you are at a sunny festival and are quite ished (for obvious reasons) and ‘Daft Punk Is Playing At My House’ is ‘Daft Punk Is Playing At My House’. It is also obvious that this is a band who transcend ideas about coolness and age. I mean, as an idea - as a concept, if they were pitched to you in a film-y way – a band like LCD should not really work. But unlike many bands this weekend, there is no sunset to make them seem gleamier than they really are; and it sounds uncharitable but it just sort of seems like they should not be this good. But they really, really are, they make a rampant, conquering racket, and are therefore MAGIC.

Similarly clattering but in a completely different way, are GaBLé. I am a little bit in love with GaBLé after getting to review 'Puree Hip Hop' for my singles thing last year. And though they are on a small stage, and though the crowd is not huge, they are brilliant. No song sounds anything like the next one, they are furious players in the way Hot Chip might be (everything is getting hit very hard). I make the note 'genre-defying mentalist nonsense' and write down how they go from 'Gabba techno to plinky plonk tweedom' [no idea] which, let's face it, is quite a feat. They also use the sounds of coughing as percussion, and do a cover of 'All Shook Up'. Wicked. HEALTH are going to have to be a sort of impromptu dinner band for us, because by now it is at least ten minutes since some sort of red meat has passed our lips. We must have a burger, and we must have one now. And it is entirely not their fault that I end up tweeting 'This is all INTRO AND NO SONG' [#whatadope, etc], it's just that we are nattering away and planning our soir and also vaguely wondering if we are sitting too near the fence, because that is where the boys wee. HEALTH are great, massive, but we have to go now, because Fuck Buttons are on.

Fuck Buttons are amazing. I think.

And this, nice, dear, welcoming and I am sure - entirely forgiving - person of the internets, is where things get the tiniest bit blurry of fact. Here are my notes for the rest of the night: So. All I know is that I catch sight of this: And then all-a-sudden our group are all in the same bar, talking to some dude who chinny reckons he is a Thai boxer, and he is asking us to translate Michael Jackson lyrics by playing songs on his phone, and then there is whisky. And then very possibly some taybly nice white wine that may (or MAY NOT) have come from the rider of one Massive Attack.

I go to bed at 7am after you know, some drinks, some dancing. I have had a wonderful, wonderful, joyous time. I am hactually still quite tired now. But I would do it all again, in a heartbeat, tomorrow.

More of Gary Wolstenholme's delightful photograms from Day Three are here. I would like to let it be known that the man is a DUDE.