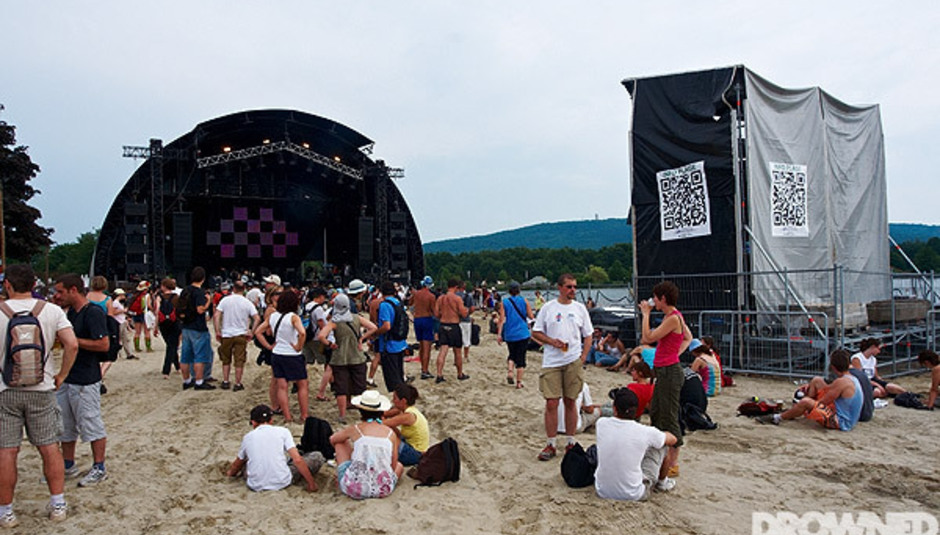 On Saturday it is still bloody boiling, and I know I shall have to pace myself if I am to last till Vitalic at 2am*. This is why it is not until late in the afternoon - the heat mostly broken - that I amble down to the arena drinking freezing cold supermarket continental lager beer. Let us call this wondrous, restorative beverage FCSCLB.

[*I didn't. But I can tell you they were so pletely banging, they shook the ACTUAL EARTH.] I begin my day with some Omar Souleyman. Mr. Souleyman does not believe in stage-based gewgaws and crackerjack visuals, mainly because he is not the sort of cat who needs them. Instead, he has a delightfully sedate stage presence – doing the sort of clapping where you keep your elbows close to your body and never draw your hands too far apart. This is very polite - if not actively patronising - clapping, yes, however he remains a strangely effective hype man, a calmness in the sea of his own mental. And even though I am seeing lots of tie-die shorts of the sort one can purchase to go with one’s joss sticks in ‘ethnic’ shops, there is more to the crowd than that; there are hip young Fronches and meatheads here too. I will admit to thinking, ‘Bloody hell, he must be hot in that dress’, and also to wondering why there is a fourth dude on stage, who I am sure has his mobile phone in his hand. While the audience is sprayed with water, I see him happily chatting in the ear of the keyboardist, and I swear I saw him texting. Perhaps it was something like this:

There is a textual word for Airbourne, and it is ROOOOOOOOWWWWWR. But having originally intended to simply walk past them on the way to another stage, I suddenly realise I must not. That I cannot. I want to stay and watch these stringy-haired, sweaty men in tight trousers with white axes, along with 90% of the other festivalliers. So now it is my turn to text, and I message DiS’ photographer Gary, to say ‘We are in front of the Panini stall, main stage, COME DO RAWK WITH US!’ But by the time he arrives, I find I am quite giggly, Airbourne have been like a sort of heavy metal espresso, and an irredeemably silly state of being has overtaken my person. I am doing devil’s horn rock hands, and shouting things like ‘Yow!’ quite loudly and this is odd, I am quite shy, but I am unable to stop myself. ‘Gareeeeeeee! They are GREAT! I LOVE THEM!’ I say. But Gary is horrified, he begins to tell us about proper heavy metal, of a festival on a boat run by Spinefarm Records (Spinefarm Records!) where you CANNOT GET OFF. ‘They’re just a really, really bad version of AC/DC,’ he says kindly, ‘and that guy, is an absolute fruitloop’, he continues, alerting us to Mr. Airbourne himself. He is now tree-climbing the scaffold until he is above the height of the main stage. AND THEN HE DOES A GUITAR SOLO WHILE HE IS UP THERE.

Essentially, it is all enough to make you feel that ‘indie’ is - sometimes, and especially by comparison - what its detractors say: wan, pale, limp, introspective. And though I have time for all four of these concepts, I am fairly sure I like TWENTY MARSHALL AMPS - A LITERAL WALL OF SOUND - just as well. Airbourne are the uncommon fun of Les Eurocks, the least pretentious and active crowd-pleasers on the bill. AND they are pleasing the ladies, for there are more Women On Shoulders watching Airbourne than there will be for any other band this weekend. AND they have something written on their banner that I intend to adopt as my new maxim: It is all very dang!

After all that, I am sort of thinking today cannot be topped. But, finding we are hungry, we locate a Stall of Wonder. It is selling enormous slabs of barbecued meat; a hundredweight of pork belly [I don't know what a hundredweight is], a glistening salted boulder of beef, ribs that could have been stolen from the National History Museum. This in itself would be enough delightful, and enough perfect, for me to think dinner will be as good as Airbourne. But then, THEN, we find we are not alone in our culinary choice, and who is it but Janelle Monáe’s guitarist and producer that are stood to eat there too. And because we are feeling all holiday, and who-cares, we sidle up, squeal a bit and talk about Fronch meat sweats with them. Or rather, at them. They don't seem to mind, they are charming, and after we have wished them well for this evening, we take our enormo sandwiches and leave.

By the time we have stopped squealing (‘I love him, I love him, IlovehimIlovehim’) General Elektriks have drawn a huge crowd on the Chapiteau stage. As it takes the best part of an hour to wrestle with our cow and bread (sorry vegetarians, but you know, what you call yourselves IS a swear word in France) we pretty much hear the whole thing. They do a cover of ‘White Lines’ that segues into ‘Ballade de Melody Nelson’ and back again, and it is not for the first time that I am struck by how much less uptight foreign music festivals are; how little they trouble over genre; and how much less rigid and serious they can be about musical rules. It is something to think about, as we play a drinking game with some French boys involving the flipping of coins and ‘gin’.

The XX are next, they too play the tented Chapiteau, and I have never seen them before; always wondered what live XXs look like; how all that shy translates. But their murmur rock provokes more than a little enthusiasm here, and the French are crazy for them. Blooming faces keep exiting the crowd because they have been in there too long, it is so blazes hot again, and people are grinning when they nip out for a breather. Their set is also the first time I spot a real, live youngling, an actual bairn, and he is videoing the whole set while on the shoulders of his Pa, bright yellow defenders on, smiling at funny old Jamie and Romy. How modern!

But then, then, it is all about Janelle Monáe. It is ALL ABOUT HER, ALL ABOUT that enormo voice that cracks in all the right places, and how exactly it issues from such an unfeasibly tiny body. It is also all about her quiff, and trying to see if we can wangle watching the bloody thing from the side of the stage. Not being a seasoned blaggard, I am not the sort of person who numbers ‘being backstage’ as a usual happenstance. By which I mean, I am so very ordinary, I am so bleedin, tear-your-heart-out NORMAL ME, that I am likely to become VERY EXCITED if we get backstage. All we need to do is walk through a security gate as if we are meant to be there, and it will happen.

And then the rain comes. It starts all pretty like, droplets on the lakes and that strange caking of the top layer of sand. And then it bloody chucks it down and I am afeared. Afeared that the small gathering in front of the stage will be all Janelle will get. That this woman, this marvel of a person, will not get the numbers she deserves. But then dry ice starts wafting out, there is a terrific lightning crack, and I realise She. Is. Here.

Three women in hooded cloaks emerge, 3 funk Macbeth witches, as the keyboardist runs, slo-mo, on the spot. The drummer has Biggles glasses on the top of his head. There is a ringleader with a top hat on. Everyone is dressed super fresh, they wear white shirts, simple black ties, neat flat-fronted trousers and black and white lace-up brogues.

It is as if GOD IS SAYING YES. A heartbreaking rendition of ‘Smile’ is, quite frankly, the dizzyingest thing I hear all weekend, Tightrope's 'One more time!' JB shout-outs are strangely affecting, her backing singers put the-rude-bit-in-Eyes-Wide-Shut, Venetian masks on, Monáe shadow-boxes during 'Cold War', and all the time more lightning, more joy, more glory.

Can Sunday top this? It's doubtful, isn't it?**

Les Eurockéennes (Friday): The DiS Re...