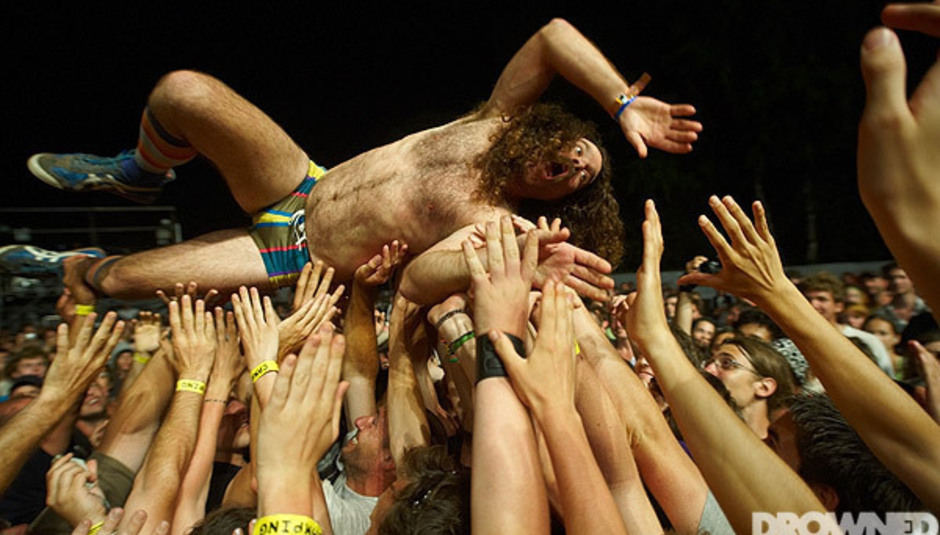 So to come clean: while swigging neat rum and ranting incoherently down phone at a PR in front of a faintly-horrified looking crowd of business people at a Swiss airport, DiS was mentally sketching all sorts of plans for a Gonzo explanation of how exactly we came to miss the first night of this festival. But then we were flipping through the comments on Swells’ final Philadelphia Times article, and came across one where a photographer fondly recalls stumbling dazedly out of a photo pit and the great man pre-empting him by snapping “If you compare that to coming out of a war zone or something stupid I'll smack you”. It’s a fair point, the explanation was not all that. So let’s just draw a veil over the lost day, save to say that Richard Herring’s rider, a pair of hot Swedish girls and the police were all involved, and possibly leave you to come up with a more lurid story than actually was the case.

So belatedly DiS arrives at Les Eurockéennes , a long-running French festival that takes place in a stunning location on the peninsula of Malsaucy near Belfort, just a hop over the Swiss border. It is very nice here: located on a strip of land between two massive lakes, it sort of has a Latitude-ish size and prettiness. One of the stages is called La Plage and is, if anything, more delightful than that sounds. Nobody minds you BYOBing. A pleasingly baffling booking policy which doesn’t find room for a huge number of bands, yet somehow still seems to run the gamut between a three day residency for Monotonix, and a headline appearance for Kanye West. Just as it should be. Call it a variety of factors ranging from who is doing the rounds to personal taste, but few revelatory French discoveries are made. Sorry, the French!

So yeah, we wade through a bit of Euro-piffle before making it to Tricky’s set, which ended with what DiS swears was half an hour of the same bass and synth pulse, ominously siralling over and over, the topless Tricky prowling wordlessly about stage, the music’s sinister avatar. Drunk and bit lulled by the sun it’s good; stoned this would probably seem the best thing ever. Also top marks for a version of The Cure’s ‘Lovecats’ that sounds like, um, The Cure’s ‘Lullaby’. Costanza Francavilla should still never be allowed near ‘Black Steel’, mind.

Despite appropriating the local lingo for the band name, this is La Roux’s first performance in the country. Which is nice, and the French all seem terribly excited, but, well... hmm; Elly Jackson’s voice rasps and soars appropriately, but seeing her icily wander in front of a blank bank of musicians, you kind of feel like you’re just watching a PA. Seeing as how the band are basically a homage to TOTP circa-1983 this may be the intent, but, um, yeah, yawn. Why are Torche here? Is it arrogant to be surprised they’ve made it to France but aren’t doing UK dates? DO THE FRENCH ROCK MORE? Er, anyway, this is kind of brilliant, devastating slews of molten melody spewed out under the band’s name, etched in fiery words behind them. How just men can be so fucking loud and still convey depth therein is mind-boggling; almost as mind-boggling as drummer Rick Smith’s sole garment of skimpy swimming trunks. Only a half hour set though. Erm. Seems a long way to have come...

Oh Kanye. Singing about your pain into autotune = contentious but brave move... ON RECORD. Live it’s fucking woeful: wealthy man stands on raised platform in front of gold backdrop. Opens mouth. Bleepy sound comes out. Is largely it. His previous Glow In The Dark tour was, by all accounts, something of a visual extravaganza, but the ‘classy’ tone of this 808s & Heartbreak jaunt pretty much stomps on any chance of being fun; no visible live instruments, vocals so processed he might as well have mimed, and nothing happening visually beyond Kanye standing stock still, looking a bit upset underneath his shades. Oh, and after about half an hour some topless women painted gold show up and sort of sit at the great man’s feet for a bit. ‘Through The Wire’ and ‘Touch The Sky’ offer some respite, but really, there’s nothing going on onstage to make any great claim for Mr West as a live talent, either as a rapper, a conceiver of theatre, or even being particularly charismatic. It’s hard to exactly know how to review Monotonix without simply giving a literal description of their set: four psychotic Israelis by and large perform entire gig crowd-surfing, occasionally stopping to fall over things and stand on drums, crowd goes nutzoid; is amazing. Mind keeps trying to focus on what they actually sound like – more Velvets than punk or hardcore, for sure – but gut keeps saying this isn’t really the point.

Staff Benda Bilili are better introduced by the superb documentary film Jupiter’s Dance than the scribbling of an indie journalist, but essentially they’re a group of Congolese street musicians, four of them paraplegic, and they proffer an ecstatic variant on old time r’n’b that trades dynamism for some good ol’ hypnotic polyrhythms. One of them plays what appears to be a tin can turned into a very small but incredibly loud harp. Excellent.

Speaking of harps: much has been written on this site as to the merits or otherwise of the new, super-produced Florence & The Machine, but credit to Ms Welch – she may be more Meatloaf than Tom Waites these days (er, musically), but she ploughs into her set with a dervish joy that makes several of her Brit and US peers look rather like paycheque-collecting circuit hogs. The crowd is by this point so pregnant with Slipknot fans that Phoenix have to break out a degree more elbow grease than they’d counted on to win over their home turf. They kick into ‘Lisztomania’, and it’s pretty scrappy; DiS scribbles down pretty much the worst insult you can hurl at the Versailles quartet: ‘sub-Strokes’, followed by the worst insult you can throw at ANY band: ‘pleasant’. But a magnificent ‘Love Like A Sunset Part I’ turns up about halfway through, Thomas sprawled flat on his back throughout, and the lie down does him good - they end a harder, groovier, sexier beast than they started. Or it could be all the beer talking.

Last time DiS saw Slipknot they were wearing boilersuits, referring to their fans as ‘maggots’, and wore really shit masks. It was hilarious. Tonight they kind of look like they escaped from a Shoreditch Halloween party (really good masks with, um, skinny jeans), while Corey has to say ‘motherfucker’ every other word to disguise the fact he seems to have mutated into a bit of a hippie, constantly telling the crowd how awesome they are. It’s still hilarious, mostly because of all the Slipknot songs, and also because one of the drummers appears to be actually flying. Kanye West could learn a lot.