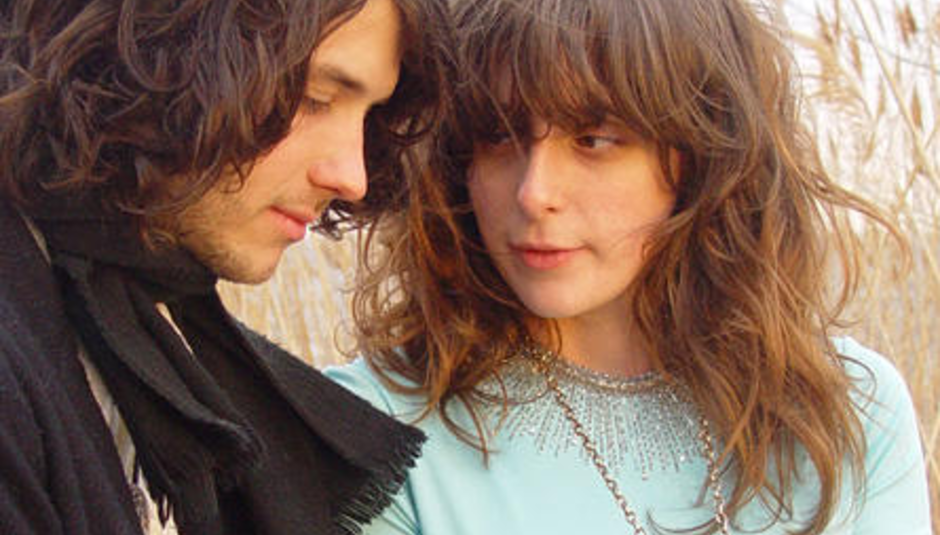 Once I was falling asleep to Beach House and I started lucid dreaming that I was running towards each of my past lives. I could control where I went, and what I wanted to say, and I could hear Devotion (Reviewed) playing in the background. I felt like nothing in life could be so bad that you won't survive it again and again. This experience lasted about two songs, and it was one of the more memorable events in my life. Without it, this band would still mean a lot to me, but now they're also inextricably with the image of a peaceful eternity.

Needless to say, I'm a little star-struck by them, even via email. These questions were fired to Victoria Legrand as she enjoyed some well-deserved time off in Baltimore, and she did a good job extracting meaning from beneath the extreme, some might say moronic, gushing. Her answers are even a tad sage-like, as befits someone whose music causes past-life regression. Emmy: You're only playing a handful of shows at the moment. What are you guys up to at the moment, personally and as a band?

Victoria: We are resting and Alex is in Hawaii with his girlfriend. We've been working on new material.

You recently played in the UK with Jana Hunter, and you're about to play with her again. Is this an affinity you have with her, or just coincidence?

We think she's smelly, but we like to play shows with her. Texas is her home state so we thought it would be nice to play with her.

Are there other bands you've toured or played with that you feel an affinity with?

We love Vetiver and the guys in Fleet Foxes. We meet nice people on the road and have made some great friendships. Jason Quever from the Papercuts is also a great friend.

You seem quite universally adored. How do you deal with the opinion press and has it ever affected your music?

We've had good press and we are very grateful. We like to not let what other people think affect our music, including the press. Keeps things focused.

As your reputation grows from album to album, how is this affecting your workload? and how is the workload affecting the music?

We challenge ourselves constantly. But we also want to enjoy ourselves. We're looking for our next visions. Alex and I meet in the middle. We're even more excited now than before.

I remember being at an Euros Childs show and someone coming up to him to say their baby had been born to his music. Do you know of your music affecting anyone's lives in a similar way? Is there anything a fan has said to you that makes it all worthwhile?

Being able to do music as my profession makes everything worthwhile. Yesterday someone said their friend's baby falls asleep to the music. Our inner babies must be connecting.

How do you find going to different countries and finding large crowds of people who have come to watch you play? Is it strange?

It can be strange but it can also be amazing. Europe and America have different types of audiences. I enjoy being able to speak French in several countries. Alex and I enjoyed Portugal a great deal, as well as Norway. I believe some of these countries have definitely positively affected us. We are good travellers and open-minded as a result.

Previous interviews I've read imply that you have a strong work ethic as a band, where does this come from and why do you think it's important?

We're both workhorses. It comes from birth? Genes? Neurosis? For me personally, it's a dedication to something stronger than me.

You come across as really funny people in your interviews, but the music has a very serious tone to it. Are there different sides to you that come out when you're creating?

'Used to Be' has a different feel from previous songs, it seems to be about new beginnings or metamorphosis. Is that an indication of songs you're writing at the moment? Has something changed since Devotion?

It (Used to Be) blossomed quickly over the summer, like a lot of things did in our lives that inspired us. Sometimes inspiration hits quickly and quickies are bumped out. Things change very naturally. Like skin and wrinkles. Nothing stays the same, or should.

How has the chemistry of the band changed now that you're touring with a drummer?

Alex and I are still strong as a twosome and we have played shows without the drummer. But it adds another energy level with a drummer. It's been fun. Devotion had additional drums on the record so we needed other arms. It's really just another set of arms and energy. We love our drummers very much.

Are you affected by your environment when you write? How does Baltimore fit into this? And the fact that it's winter?

Never directly inspired by Baltimore. At least up until now. Winter is hibernation and thought and absorption. But also a time for details and inside work. Bmore provides shelter for creativity.

Do you have plans to make the next record soon?

You've said that you weren't really in bands before Beach House, do you think you'll be making music as Beach House for a long time?

I think about doing a solo dance record all the time. I think we'll be making Beach House music for a while though. We'll work together as long as it feels right.

Beach House's new single 'Used to Be' is out on Bella Union now.