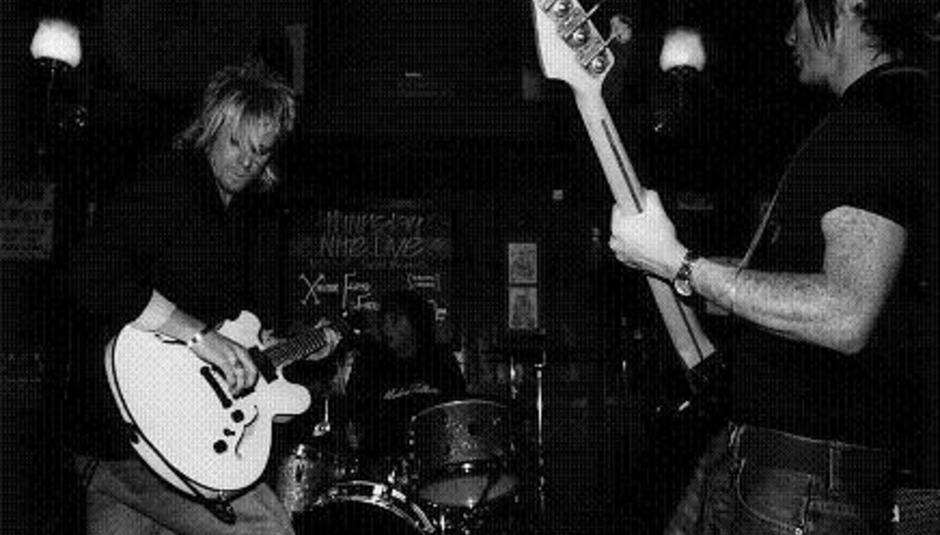 Betsy: “That song by Kris Kristofferson, where it said “Like a pusher, partly truth, partly fiction, a walking contradiction.”

This quote springs to mind when talking with Southampton’s Xavier Floyd Firebird, as although their exhilarating rock sound is impeccably direct, chatting with the band reveals a conflicting edginess, which all the best bands posess.

Example? Well, vocalist/guitarist Danny Floyd will one minute say: “If anyone comes up to us and speaks to us and we get on, then they’re in the game”, as brother Paul (bassist/vocalist) reiterates: “We’ve already got a really loyal fan base”. However by the end of interview Danny will declare: “We don’t know everyone who’s into us and if we met them, we’d probably like half of them and hate half of them – that’s life.” He will also add as a last thought: “The only fan we’ve got is the one in the studio which keeps us cool when we get a bit sweaty.”

Although he’s clearly joking, it’s an example of how the band constantly swing between abject positivity and downright pessimism. They have everything to be up-beat about too - their gigs are winning over new fans, including a recent tour with JJ72 and an upcoming performance at this year’s TMF festival. However, ‘California Sunrise’ which triumphantly ends the band’s set following their chat with DiS, is endemic of their shifting beliefs with lines such as: “I’m the singer in a rock and roll band, you can’t touch me, and then the sleep gets harder, and I want to end it all.”

When asked if there is much abuse between brothers Paul and Danny, the latter will reply “Not really, no”, before Paul interjects slyly: “Yeah there are!” However the bassist is also keen to point out: “It’s alright really because we can really rip into each other but at the end of the day we’re brothers, so we can apologise and let it go. The only real arguments are about which entrance to enter the service stations!” Danny will then appropriately end the subject by adding: “Normally we have an argument, and then everyone agrees I’m right!”

Drummer Kenboy Leonard is perpetually quiet throughout the discussion but often adds comments as dry as the most sweltering of deserts. “You were stalking me for two years!” is his response to Danny’s assertion that before joining, the band had: “tried to poach him for a while.” Despite the three-piece dynamic, the band have created waves through producing a passionate racket so huge, that if Tim Henman stole it, even he wouldn’t have been able to fuck things up annually.

Three is clearly their magic number for the band, as Danny explains: “It’s better because there’s less egos to bruise and worry about”, before Kenboy counters: “It leaves more room for yours Danny!” Despite consistently taking the piss more than a sewage worker on overtime, the band definitely feels like a tight group. Danny claims: “The gang mentality is very important to us. We don’t see it as being just a band so much, because everyone and anyone is just as important.”

However it again swings both ways, because although they will accept anyone, there are clearly certain people who aren’t quite as welcome as others, as portrayed in new song ‘96 Hours’. Danny explains the consequences of the song being written: “The honest answer is that it’s about getting arrested after calling a policeman a wanker! They walked past, when us and Delays were walking up the road together and got ambushed and beaten up quite badly.”

“We don’t normally write about that kind of stuff but we try and put some sort of take of what we see the world as. We’re not a political band but if we’ve got something to say, then we should say it. People can take it how they want to take it.”

Being both outsiders and adored, Xavier Floyd Firebird may very well be a walking contradiction. But when the music sounds this good, it really doesn’t matter and although they (probably) won’t go on a killing spree like De Niro’s on-edge cabbie Travis, this is one ride you’ll definitely want to be a part of.